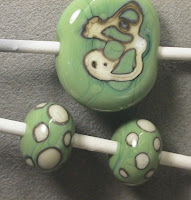 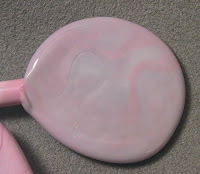 Following up on the very shocky Effetre Pinkie Winkie and Okey Dokey Artichokey - tossing them in the kiln and annealing them did the trick. They are much better behaved now.

I just put the rods in while I'm making the beads - you can put them in at the beginning of the day, before you start, but I put them in after the kiln was hot and they were fine. I don't have quite enough room for them to lay flat - not with the rests that I put the beads on in the kiln - so they lay at an angle, and they get a bit of a droop in them. But at it doesn't really make a difference to using them, and that way, I can tell at a glance that they have been annealed!

The Pinkie Winkie really is a pretty, girly colour. I wish it was more dramatic pink and blue, but it's still really pretty.

I wish the Artichokey was more dramatic too. I like dramatic streakiness.

Oh, and as you can see - the Artichokey does react with ivory.

Oh well - the Lace Agate is dramatic enough for me. 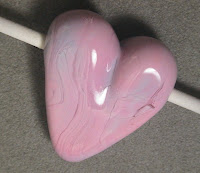 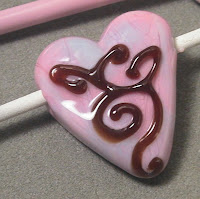 This heart has a scroll of Very Cherry on it - which is rather too dark in this application for my taste.