Well - the studio redesign for beadFX is done, and while there are just a few more items to take care of - it is up and running.

I personally feel like I have hardly had time to sit down at a torch lately - and judging from my out-put - I would say that is about right. The glass gods could be working a little harder at conspiring to get me to the torch for my taste - I think they are slacking a bit here.

Anyway - I did manage to sneak in a minute or two to check out the Reichenbach (after typing that 7 different ways - I hope I finally got it right!) - Pink Lady. This is a pretty intense transparent pink - in the tradition of the Reichenbach furnace glasses - so I immediately tried working it thin.

This is Pink Lady, laid down in a thin encasement, over white. It is an intense fuchsia pink - very nice - but I did get a smidgeon of scorching (near the left side - see the greyish bubbles). Don't work it too hot. 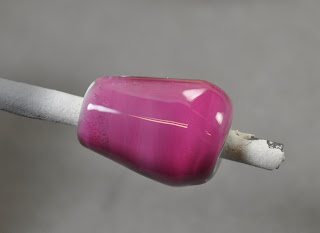 I then made some encased cane - Pink Lady over white - pulled into stringer - and made some of those ghastly traditional spiral roses. 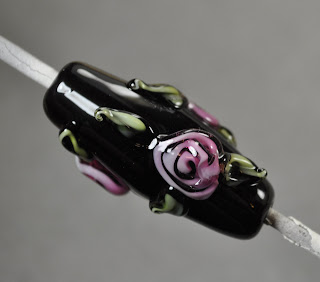 If you aren't familiar with these, these are traditional on the old "wedding cake" Venetian beads - lots of goldstone and little pink roses. 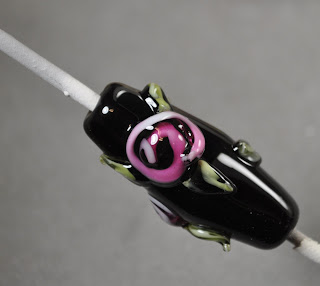 To make them, make your cored cane, then make a base bead. Spot heat a circle on the bead to glowing, but not soft. Heat the tip of the stringer to make it sticky, and start in the middle of the circle. Work to the side of the flame, in that spot where, when you bring the stringer up to the flame - it starts to glow. Start in the middle of the circle, and make a spiral with the stringer, trying to keep it as tight as possible. (Tip, push on the stringer as you use it. Once it is glowing - it is too hot to control. Your goal is to have it hot enough to soften and move, just before it starts to glow.)

Melt in enough to have it stick - try not to overheat it and let is smear. 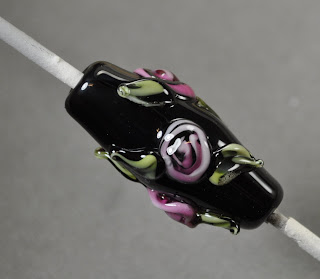 The sad part is, they really do resemble roses, no matter how sloppily done (witness my pics!). Some green ribbon cane swiped on for leaves completes the illusion. 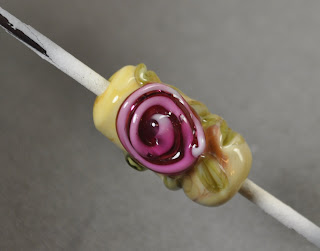 It's an interesting phenomenon - our brains really do try to impose order on the world by seeing familiar things and interpreting patterns. Like a pink spiral becomes a rose. Not sure if it would work with another colour - would blue cored-cane give the illusion of blue roses? 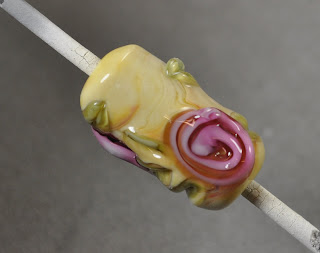 The reason I dislike them is because they are like hearts  - charged with a lot of sentimentality and preciousness. In other words - they have become a cliche - for me - like white picket fences and gingham aprons.

But don't let MY prejudices stop you from having fun making them! ;-)
Posted by dragonjools at 10:15 p.m. 2 comments:

More on Plumbing - Connecting the Torch - Teflon Tape vs Dope 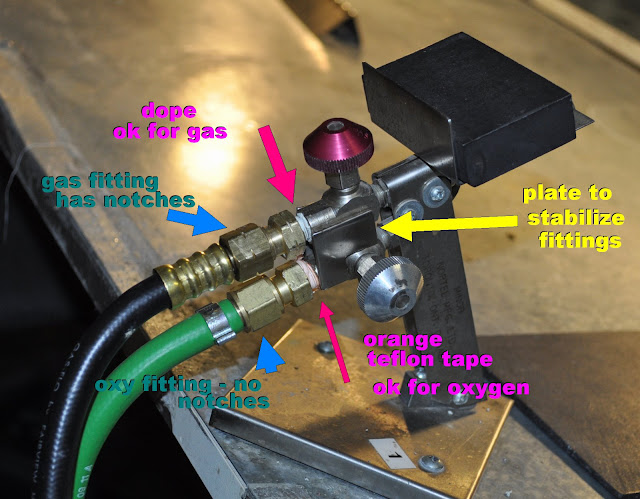 Here's a picture of a torch - after correct installation.

This is a Nortel Minor Burner. The black hose is the gas, and the green hose is oxygen. Both are using "B" fittings. Notice the dope - white, on the gas, and the orange T-tape - teflon tape - on the oxygen.

Notice also the gas fittings have notches cut into the outside. Gas fittings are threaded to screw on in the opposite direction from usual (so lefty - tighty instead). This is so you don't attach a flammable gas line to a breathable gas line by mistake. You literally can't do it.

It takes two wrenches to undo and tighten the fittings - otherwise the torch just gets bent out of shape. The plumbing inside the torch is easy to bend once you start going at it with a wrench - and you don't want to do that. You notice the plate on the side marked "plate to stablize fittings" on the illustration above? If you have an older torch, and do not have these, but are planning to convert your torch from the barb fittings to the B fittings, contact jean@nortelmfg.com to obtain these plates. They just bolt on and stabilize the connectors so that you don't bend them while taking the fittings off.

Below, marked by the yellow arrows, is the adapter, and in hot pink, is the B fitting. Notice there is no dope or tape between these two. B fittings do not require tape and should seal tightly without it. If they don't - generally - there is some contamination or the fitting is damaged. It was the presence of a sealant in this area - between the pink and yellow - that clued us in that there was something wrong (see last post.). 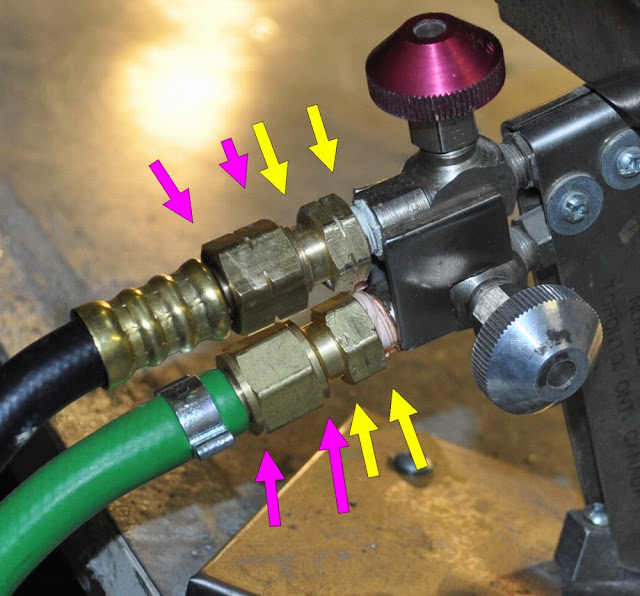 Here is another thing you really need to know when building your own studio.


Oil and Oxygen are a bad combination. Don't mix oil and oxygen. Ever.

I say this because I have known it for so long that I assume everyone knows it, but apparently not. Welders know it - they were taught it when they took the welding course.

Here's another tip - not all gas fitters are welders.

Ok - let's move on to more positive information. I was recently involved in a studio move and re-design (hence the paucity of posts lately!). One of the criteria was to streamline the look and function of the studio by moving the oxygen tanks outside of the actual flameworking studio.

In the past, a single oxygen tank fed a pair of torches - so when the oxygen ran low, you needed to stop two torchers and swap out a tank - which meant - for the six stations that were there, you needed three tanks in use, and at least three in reserve, and probably three empty for pick up, for a total of nine tanks in rotation. That's a lot of storage, and lease fees, and you still  have students running out of oxygen mid-bead if you don't watch the gauges.

We wanted a better solution.

What we planned, therefore, was a manifold to hook up multiple tanks in another room, and a pipe to run into the room, and to near each workstation, and hoses to make the final jump to the torch. One system, mulitiple tanks - no running out of oxygen.

What kind of pipe to use? We were concerned with two things - one being the material that the pipe is made of, and the other was the size - diameter.

What the pipe was made of was significant in that we should have no undue reactions or corrosion from the oxygen, and size in that it be large enough that there is still sufficient pressure at the end of the run. Size does matter. ;-)

A long run of hose or pipe will reduce flow just through friction - and if you don't believe that - replace your garden hoses with 3/4 inch hose and see what a difference it makes when you water the lawn. I had already noticed a very large difference just in the varying hose lengths that we were using. (Tip - don't have your hoses longer than they really need to be.)

We went with "Black Iron" pipe - because that was what was being run for the Natural Gas that was also being piped into the room. The Natural Gas comes from the city pipes, but is not at sufficient pressure to run 6 torches, let alone 8 or 12 - and so it runs through a booster - which is fairly noisy - and we wanted that out of the room too. While I personally prefer Propane for working glass - sometime Natural Gas is just easier. And you never run out.

But what we didn't realize was that Black Iron pipe - and for that matter, pretty much all pipe unless specified otherwise - comes with a light coating of oil to prevent corrosion. Remember what I said about oil and oxygen?

The pipefitter did a brilliant job running the pipe, setting it up and installing it - very neat and well planned - built the manifold, valves, etc. Assembled it all with a sealant known as "dope." Remember what I said about not all gas fitters are welders?

Dope - pipe sealant - is a non-hardening paste that ensures a gas/air tight seal and says on the container "NOT FOR USE WITH OXYGEN SYSTEMS." It contains oils to keep it flexible and prevent it from drying out and hardening and no longer being an effective sealant.

Fortunately - the gas fitter went ahead and hooked up the lines to the torches and used rather a lot of dope to seal the fittings. And when we saw this - his rather generous use of dope on the B fittings (which don't need dope - more on that in another post) - got us thinking about the dope, and then saying - wait - if he didn't know that - then what else didn't he know? ... It got us to look much closer - realize that the entire system had been sealed with the dope, and ... this was a problem.

In the end - we had to have the oxygen line disassembled, the dope cleaned off the fittings, reassembled using orange Teflon tape (rated for oxygen) - and then flushed with a hot water and TSP (Tri-Sodium Phosphate) solution, then flushed with clean water - then blown out with air to dry out the lines. The TSP flush is the procedure to remove the oil coating from the pipe. (As the pipe was already in place, we set up a barrel with the hot TSP solution and a hose attached to a transfer pump (an inline pump, like a waterbed pump works) - and a hose from the other end running back to the barrel. The solution was pumped through several times, then again with the clear water flushes. Not really a big deal.)

The system is now oil free, safe, and working beautifully.

If we were doing it again, we think we would opt for a brazed copper pipe for the oxygen (all the useful information showed up after the choice had been made!) - but we would still have it cleaned to remove oils.

The good news is that the diameter of pipe we chose is brilliant - and we have great oxygen pressure and no variation in pressure/flame as torches are turned on and off.

I'll get you some pictures of the system and set up in case you need ideas for your own system.

(The whole thing is a tad embarrassing - wish we had all the right data at the beginning of the project! But I publish it so that you don't make the same mistakes.)

CiM's Obsidian, as I've mentioned before, is a very, very dark, warm grey - that reads as black when used by itself.

I thought I would try it with some Opal Yellow (Effetre 266)  in a twistie.

The Obsidian does bleed out into the Opal Yellow, but in a very pleasing way - the warm grey/brown working nicely with the warm, buttery Opal Yellow. The end result is a sort of toasted zebra effect. 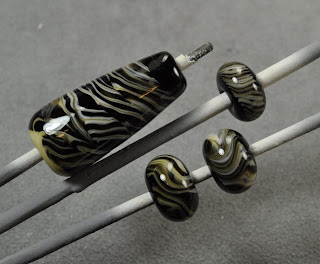 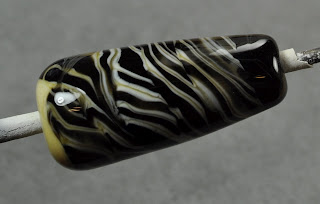 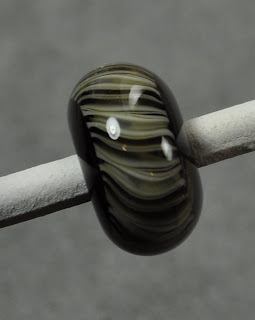 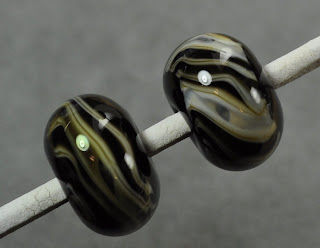