I've talked about this colour before, so feel free to breeze onto something else. But somehow, this colour keeps popping up for me - maybe because it is so bright.

This is an old batch - CiM no longer uses the designation "unique" for mis-melts and colours that don't match.

It's just an in-your-face bright opaque yellow. Lemons and daffodils and canaries. Yellow. 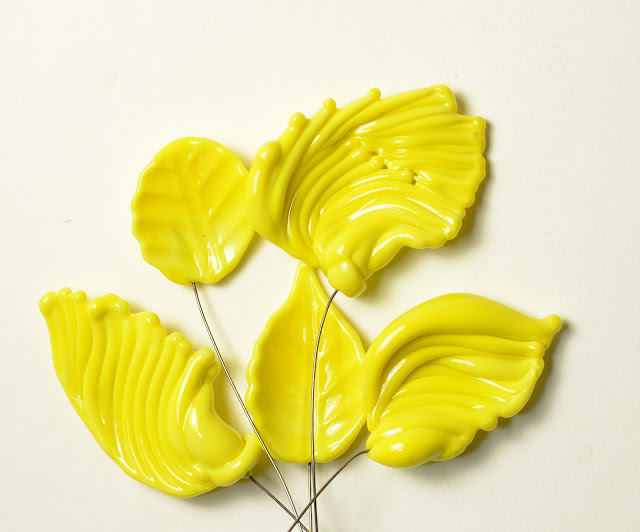 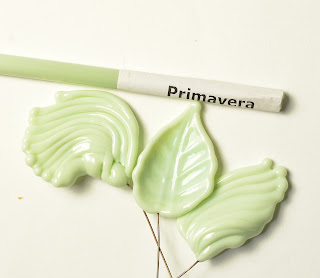 CiMs Primavera - I keep thinking of this as Primaverde - which would make it "first green" - n'est pas? Anyway - I looked at this and thought it might be very similar in colour to Effetre Copper Green, but I was wrong. And not wrong. Read on.

It's a nice, light, opaque, green, pretty, middle of the road, hue-wise. 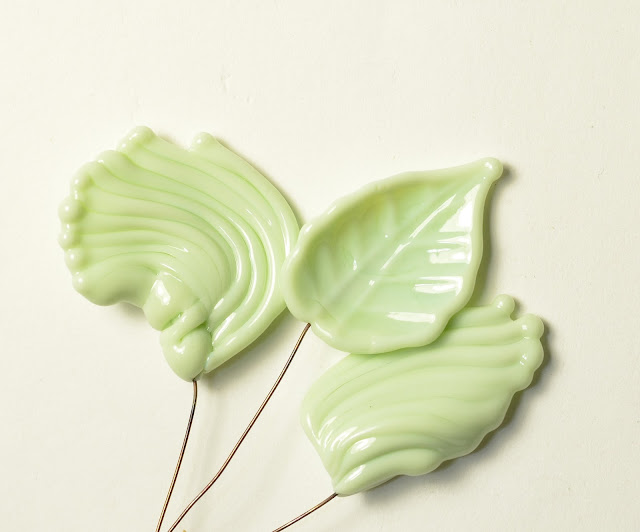 Here it is, side-by-side with copper green (on the left). The metallic blush on the copper green gives you the overall appearance of it being more yellow than it is. You can see that where the colour has stayed green, the green is a blueish green, which doesn't match the Primavera (on the right) at all. But the overall impression is quite harmonious - the two greens looking very nice together. Food for thought. 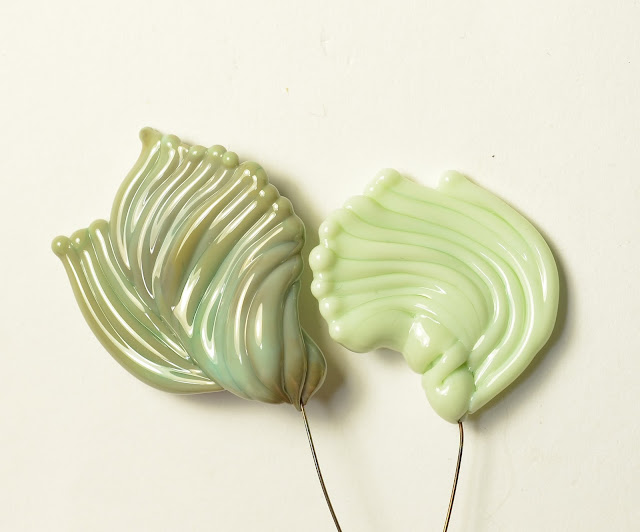 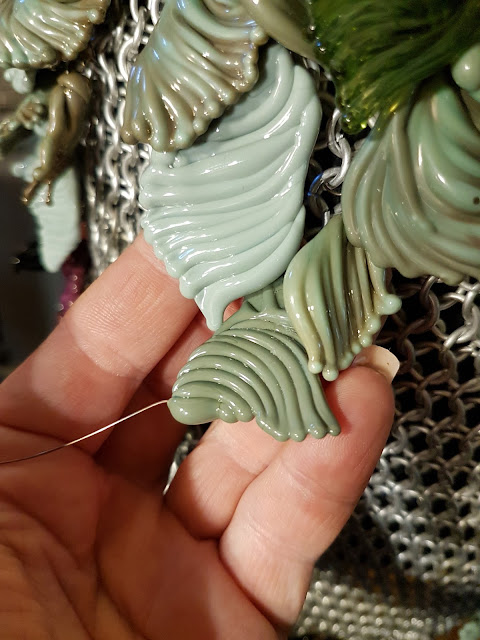 Color comparison. Resting in my hand is CiM Troll. Above it to the left is CiM Duck Egg. Above and to the right is Effetre Copper Green - with it's distinctive metallic sheen.

The Troll and the Copper Green are very close in color - the troll is a smidge bluer, I think, but does not have the metallic development. I can't speak to it's other reactive properties.

The three do look good together.
Posted by dragonjools at 1:59 p.m. No comments: 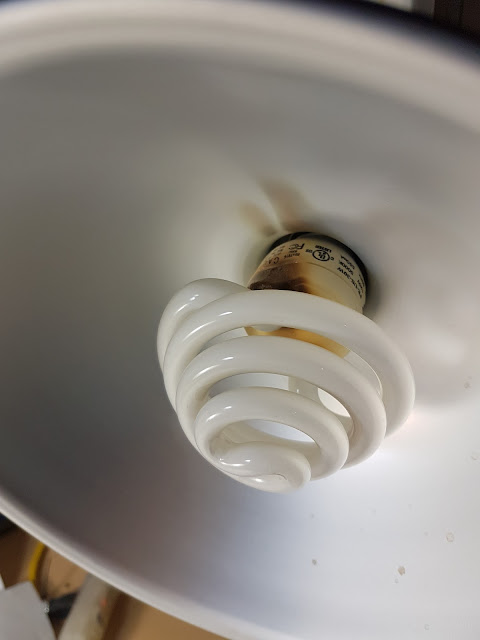 Why, readers of the last few posts might wonder, does she keep whinging about a light. Probably because you didn't see my posts about it on facebook, to whit:

Are compact fluorescents supposed to make a hissing noise and then start smoking?

Literally - smoke started pouring out of the light, and not a puff either, a sustained trail of truly, stunningly, vile-smelling burning electrical fire type smell.

This was not  just any light bulb, but one of the ridiculously expensive color balanced light bulbs, bought from a specialty photography site.

Hmmm. The smell was so awful, I had to put the light out in the garage for a while, even after removing and discarding the bulb. It did clean off, but hoo-boy - it was nasty.

This does demonstrate, however, that "it is all done with smoke and mirrors" - and once you let out the smoke ... it don't work no more. ;-)

The opaque neutrals/greys from the latest batch from CiM - the rods don't look very inspiring, but the results are far from ordinary. 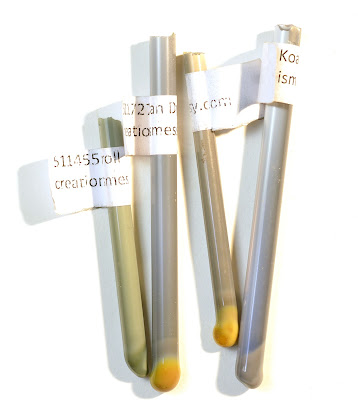 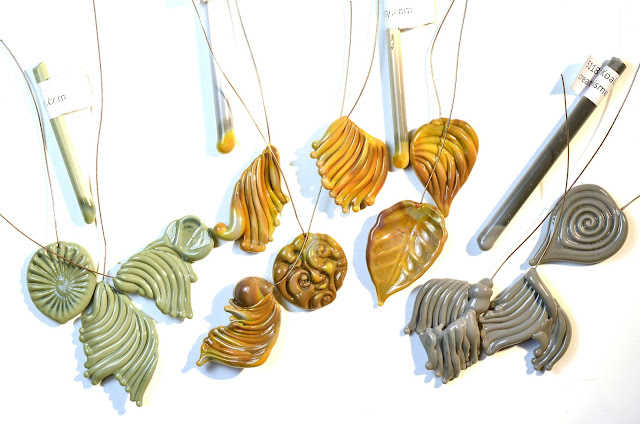 Koala stays true-ist to grey - troll is sageier, and Van Dyke and Safari hove off into uncharted waters with desert colours. Or dessert colours if it is honey and caramel you are after.
Posted by dragonjools at 10:41 p.m. No comments:

CiM Koala, in the rod, at my torch, looked like a warm brown, but here at my computer - it is more of a blue grey - pretty close to neutral though.

This light is screwing it up, because here it looks warm again. Maybe it is a color shift. (Wanders around house looking at it under various lights. Nah - I just really need to replace that light bulb.)

It was a bit shocky for me - but I did not have that large a sample, so I can't say if it is typical or not. It did look blueish while I was working it. 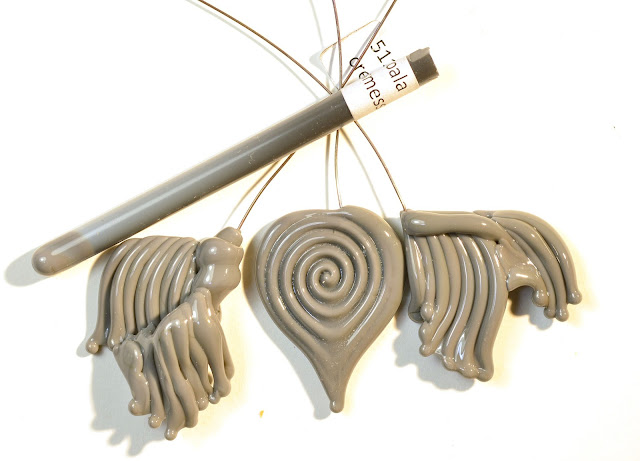 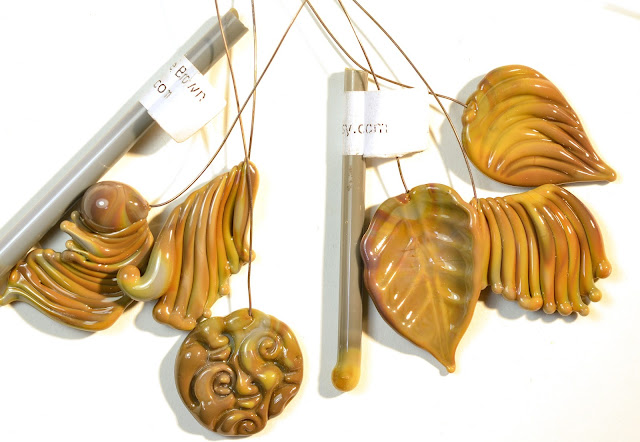 But functionally - I can't tell them apart. Maybe they work differently in beads.

They are beautiful, but they seem interchangeable to me - given their variability. 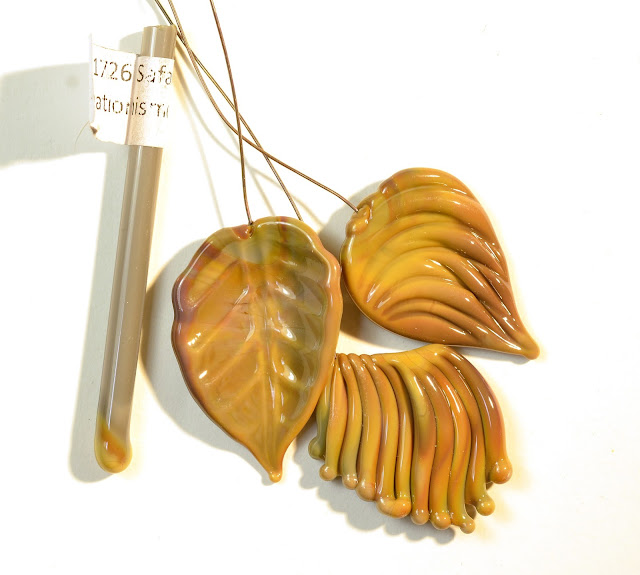 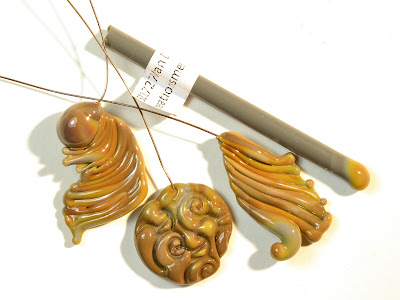 Van Dyke Brown was historically a warm brown made mostly from soils and earths - and looking that up led me to this rather interesting looking website, Pigments Through the Ages, but before I go down the rabbit hole on that, I had better blog this.

CiM's Van Dyke looks like a blue grey in the rod, but works up into awesome tawny shades of autumn.

I mean just look at that rich colour shading. Delicious! 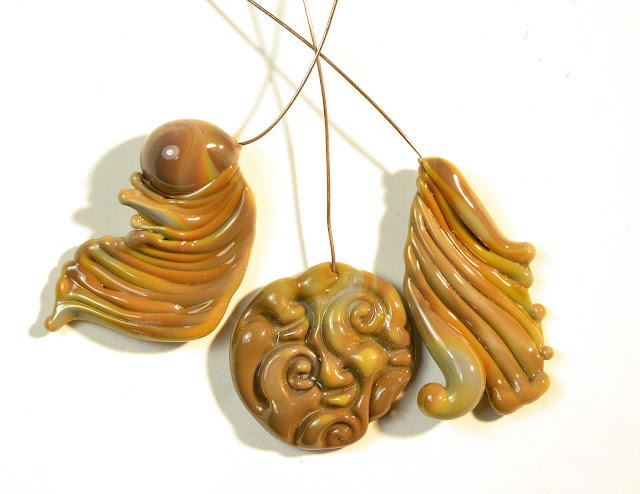 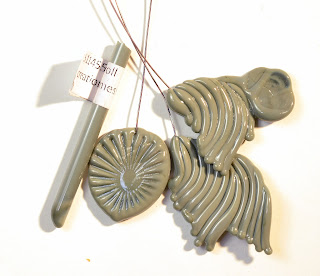 It's a well behaved opaque that frankly looks like more of a bluer green grey than these pictures look on my monitor, but as always - your mileage may vary.

I've got to replace that light. 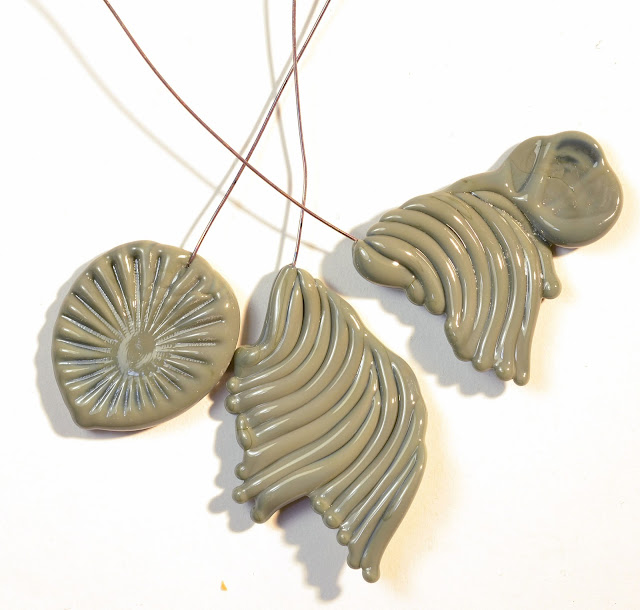 This latest round of new colours from CiM is heavy on the greens and yellowy-greens - which is awesome - because right now I have a thing for yellowy-greens. Who knew?

On the left, two in Cornsilk, and on the right, three in Yangtze. Yangtze is a little greyer, Cornsilk is a little purer in hue. 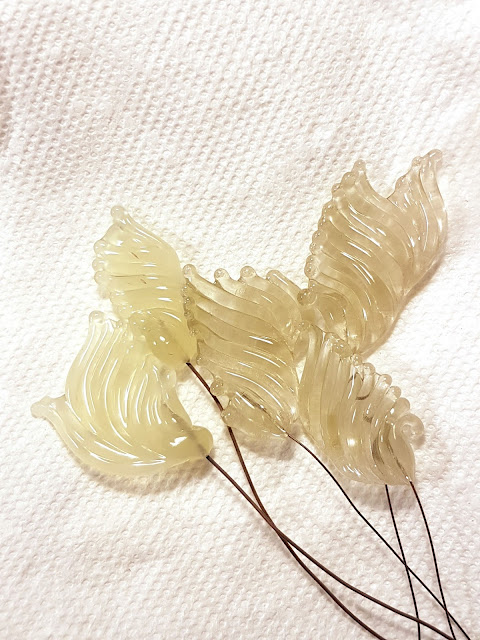 And here, from the left again, two of Cornsilk, three of Yangtze, and three in CiM Peridot. About the same for saturation, but the colour is moving to the green. 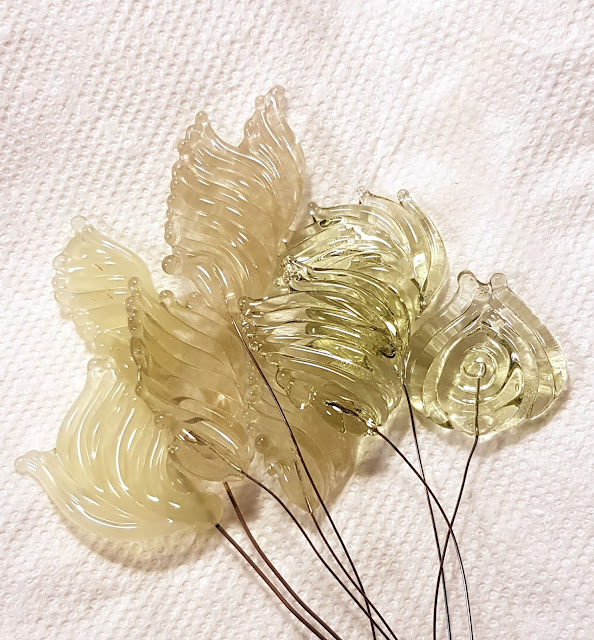 The Cornsilk and the Yangtze complement each other beautifully, two shades of the same hue.
Posted by dragonjools at 12:39 p.m. No comments:

CiM Pachyderm is another interesting multi-color glass from CiM. In the vein of Class M Planet and Prussian Blue, this glass gives you two, two colours for the price of one!

The medium grey opaque rod works up into a light grey and an adobe mud colour - like an elephant wallowing in her favourite watering hole. Elephants on parade! 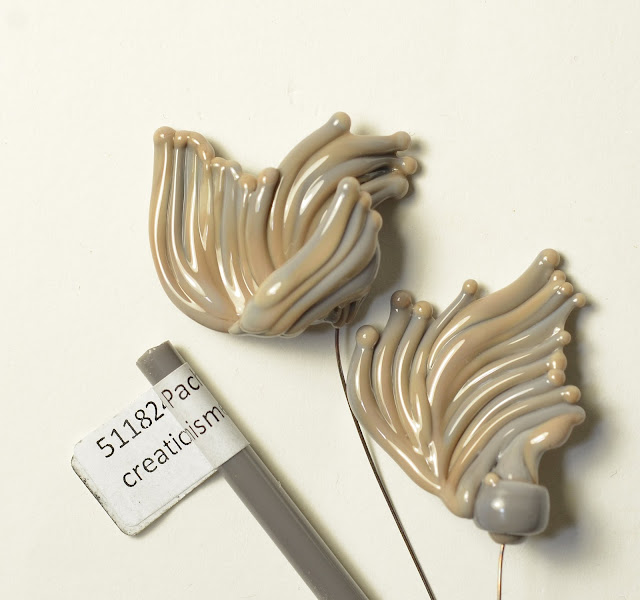 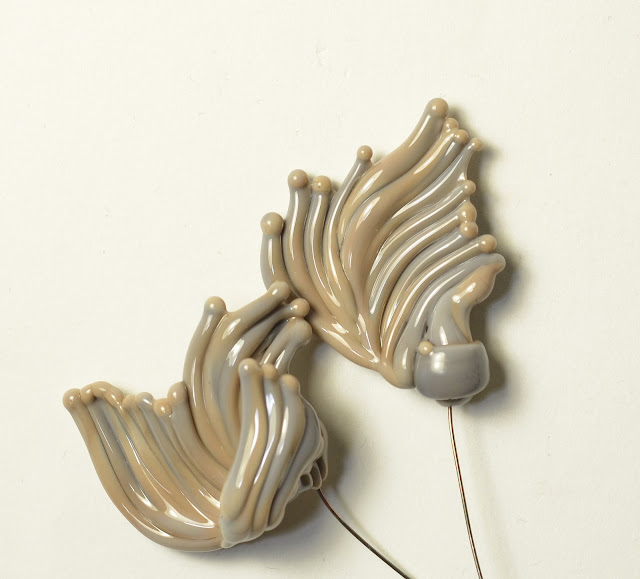 Posted by dragonjools at 2:38 p.m. No comments:

The Yangtze River may have turned blood red in 2012, but this CiM Yangtze is a pale translucent misty golden yellow like the light of the sun through a fog in the morning.

Excuse the quality of the lighting - one of my highly expensive color balanced compact fluorescent light bulbs make a pffftz sound and started pouring out smoke. Rather more drama for a burned out light bulb than I usually expect. 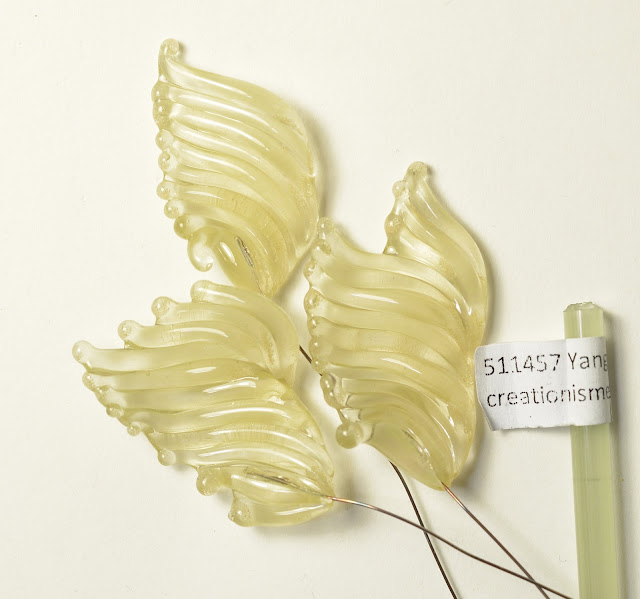 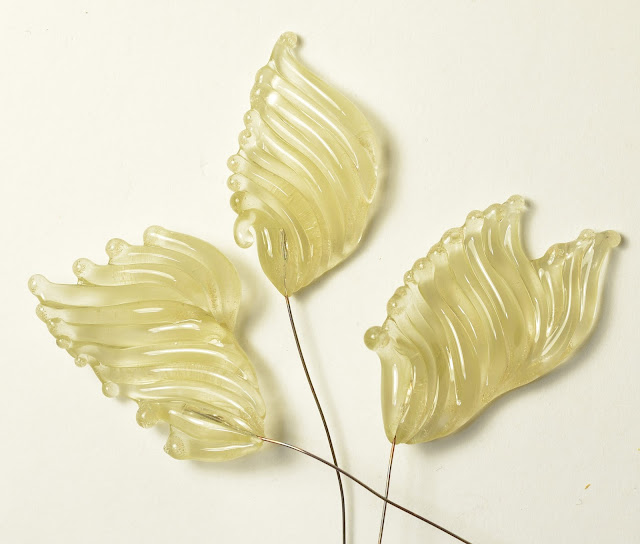 Posted by dragonjools at 2:31 p.m. No comments:

CiM Peridot is a very pale, yellowy green. It is a pretty and delicate colour - and when heating it, it almost looks like it is striking, as the heated end changes colour, but as you can see - it goes back to the same colour when cool.

I found I got a lot of fine bubbles in it - which you can also see.

Some of these very pale transparents make lovely encasing colours, but this one might make you crazy if you get the bubbles too. Might be very nice over silver foil, however. 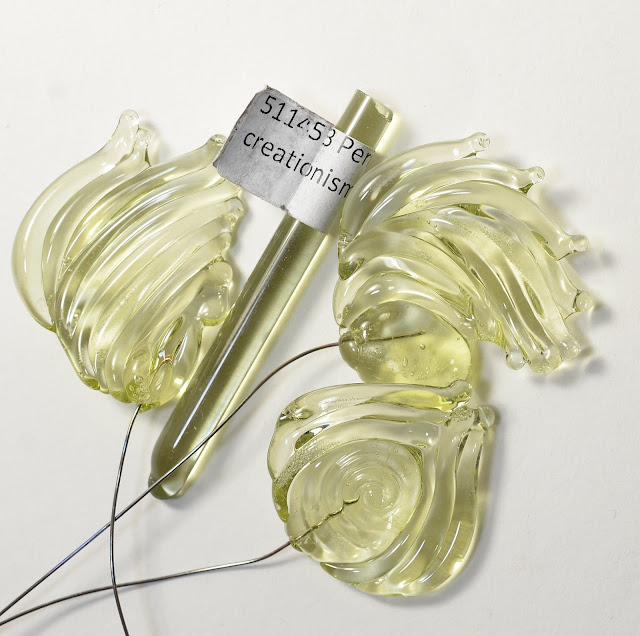 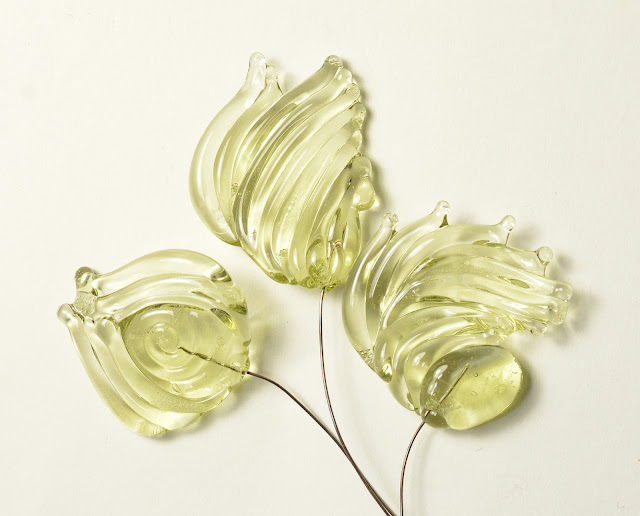 Posted by dragonjools at 2:14 p.m. No comments: 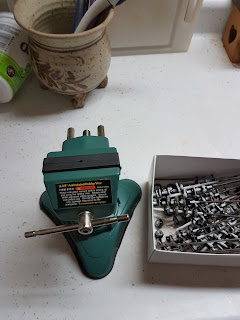 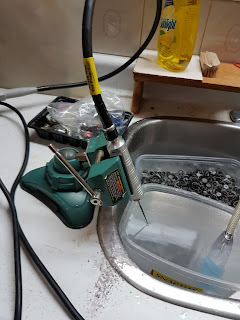 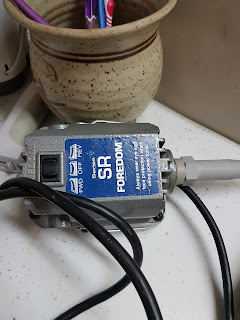 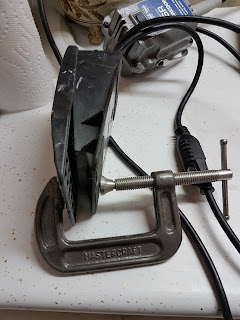 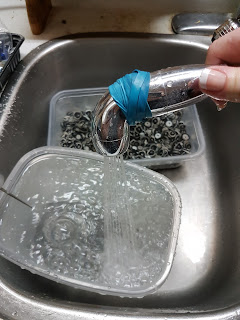 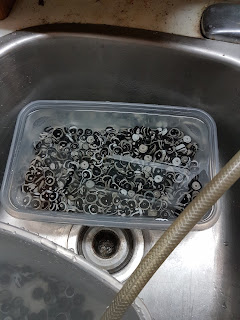