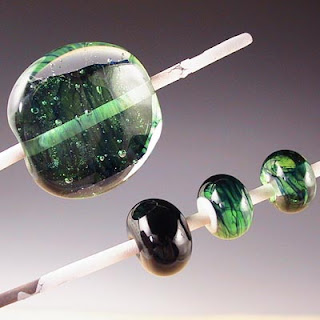 Nessie Ice it's called - and the rods vary, some look black, some are a dark blue/green.

It is a very dark colour, too dark to use by itself, see spacer on far left. Laying over white reveals it's true nature, green with tendrils of blue, like swimming through an underwater weed bed - which is a very bizarre sensation, btw, if you haven't tried it. The soft touches of the weeds are almost reassuring, like they are holding you up, but in the back of your mind is every horror movie you've seen where the diver gets snagged and pulled to the bottom to be eaten by a giant mutant tentacled creature. 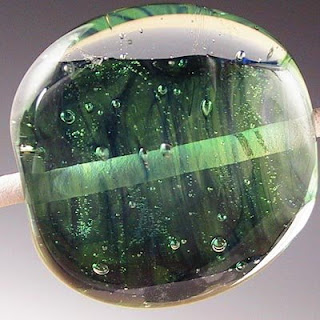 The larger bead is a clear core, Nessie Ice, encased in clear, and mashed. This shows it's streaky nature well, and the bubbles, a result of my hasty casing, enhance the effect. A few fish murrine on top, and you'd be good to go! 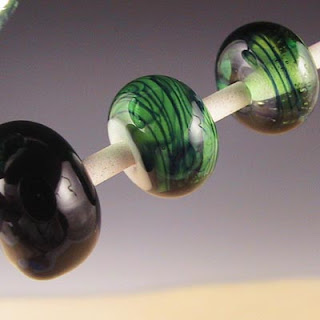 Posted by dragonjools at 8:48 a.m. No comments: 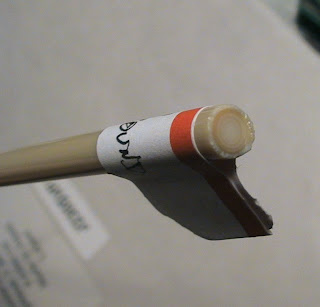 My first thought, when seeing this glass for the first time, was that it reminded me of the Effetre/Moretti Yellow Opal. 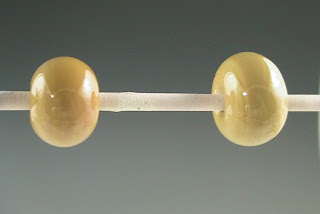 My second thought is that it would strike, as it cools out of the flame to an almost white, and re-introducing it to the flame brings back the colour - but it obviously kiln strikes as well, as these two beads came out of the kiln virtually identical. The one on the left was struck to light brown, and the one on the right went into the kiln w/o any reheating, nearly white in colour.

As it reminded me of Yellow Opal, I tried fuming it - the left end of the bead is fumed with silver, and the right end with gold.

You can see that it has developed a lovely warm, nutty brown, a little more so on the gold-fumed end. Not really the same as fumed opal yellow - which goes more pinky.

It's a nice earthy colour, and worth playing with if you are working with an earthtone colour palette.
Posted by dragonjools at 10:35 a.m. No comments: 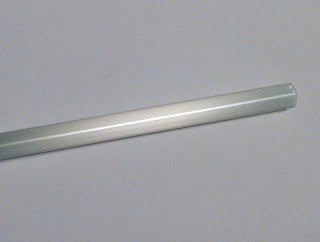 An odd and intriquing colour - Dirty Martini seems like such an inauspicious name, but yet . . . it seems to fit.

The rod has an interesting shimmer to it - which is not manifest in the bead. The colour itself could best be described as a greeny-grey. 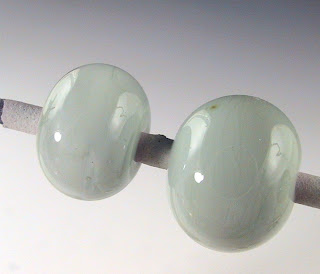 The bead on the left is encased in clear.


The goldy green version was fumed with gold, and went a very nice colour.

An intriguing colour - not so much "pretty" as some, but a good background or base colour and it looks like it might bear more experimentation. 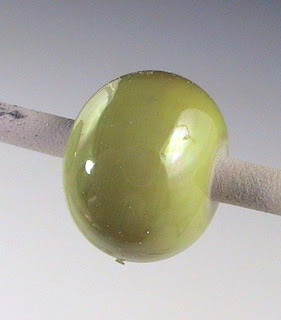 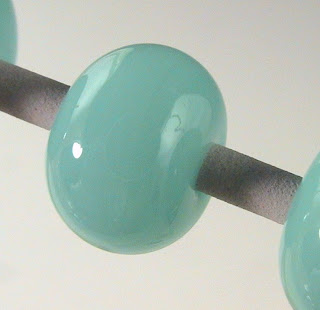 When I think of "Kryptonite" - I think of a bright, yellow green (like this) - but nevertheless - this is a gorgeous glass. This is a wonderful Seafoam colour - and a colour that has not really been available in the 104 palette - I usually have to go to Bullseye to get this colour - so I am totally pleased to see this one.

It looks translucent in the rod, and works up to be still translucent, but not misty or opal. More like an oily or alabaster glass.

Definitely buying this one!
Posted by dragonjools at 10:19 a.m. No comments: 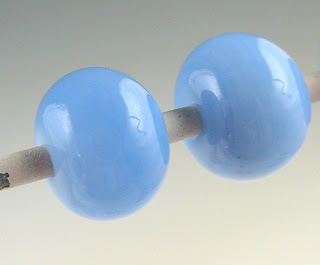 Chalcedony - Similar to Halong Bay, but more opaque - it's not a completely opaque colour, but not a misty opal like Halong Bay.

Beautiful colour - I will be buying this one.
Posted by dragonjools at 10:11 a.m. No comments: 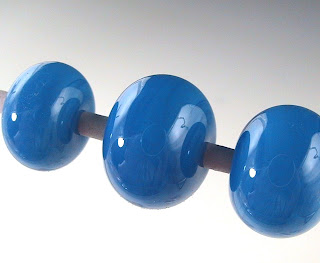 The rod almost looks like a translucent colour - but it seems fairly opaque in a bead - maybe when used very thin . . . .

It is also an awesome shade of teal when hot - too bad CIM hasn't made that colour yet - (hint, hint).

Gorgeous glass - love. Will buy lots of this.
Oh, and because I know that you are now humming and have the song stuck in your head, here's the lyrics.

Down in the street there is violence
And a lots of work to be done
No place to hang out our washing
And I can't blame all on the sun, oh no

Workin' so hard like a soldier
Can't afford a thing on TV
Deep in my heart I'm a warrior
Can't get food for them kid, good God

Who is to blame in one country
Never can get to the one
Dealin' in multiplication
And they still can't feed everyone, oh no 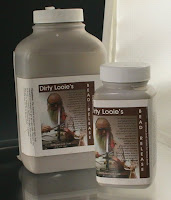 A new bead release, and I wish I could say I loved it. But it's not making it to my favorites list.

First of all, I will say this in it's favor - the label says that it cleans out nicely from transparent beads and leaves a cleaner than usual hole. This is true, it does this and does it well. Now, for the bad news.

The first jar I got (the larger one) was just plain defective - it didn't work - the bead release on the mandrels curled and cracked in the flame - lifted off and broke, even before I got the glass anywhere near it. I thought perhaps it was too thin, so I tried leaving the lid off and letting it "dry out" a bit. No change. And btw - this bead release separates like I have never seen a bead release separate before - with about an inch of clear liquid floating on the top of the larger bottle. This is not just a settling in transit thing, as it will do it from one usage to the next.

So, to be fair, as the endorser/developer (not clear which) - Lewis C Wilson - is someone who's work I have a great deal of respect for - I tried a fresh bottle. This worked significantly better, and actually functioned as a bead release. It is not particularly strong, I got some failures, where the bead release breaks during making the bead, but it was reasonably good, and, it does clean out very nicely. Not the easiest to slip the bead off after, but not a problem in any way.

However, the dipped mandrels do NOT age well - perhaps it's the humidity here - but I find that the mandrels I have that are still dipped with it, and were dipped about a week ago, when I put them in the flame - the bead release cracks and curls and flakes off.

IMHO - this bead release is too finicky for my personal taste - perhaps it might work better for others in a different environment - but I'm giving it a pass. Sorry.
Posted by dragonjools at 11:54 a.m. 2 comments: