Oooops - thought this looked cool - Iris Black - so picked up a couple of rods and as I go to try it, I realized that it is 96 COE. 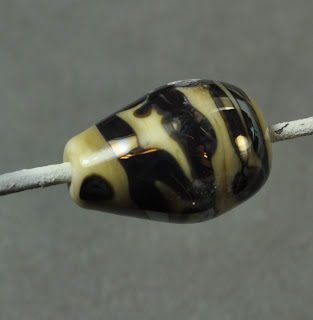 I thought I would risk it on the ivory and just keep it to a small amount and see if I could get away with it.

So far - it seems ok. I hit it with a light reduction flame and it brought up a nice metallic sheen, and fumed the ivory.

As I don't stock a lot (any!) 96 COE glass - I thought I would use it by itself in this wavy heart, made on the Sirius system mandrel. Again, a light reduction brings up a nice metallic look. 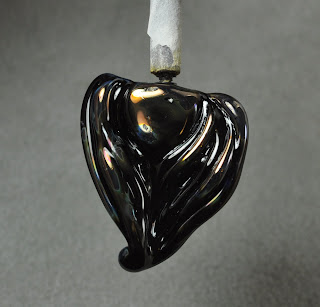 Posted by dragonjools at 7:37 p.m. No comments: 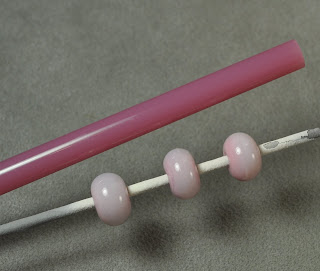 Yep, it's opaque. I'm no longer disappointed by these yummy colours that come out commonplace. If Lauscha says "Opaque" - they darn well mean it.

Labelled L SNO 420 Op Pink - from an old stash from Glassdaddy.com - not sure if they are still selling.

It's a angel-skin soft pink. A little darker on the sides where is got less direct heat. Nothing like the unworked rod.
Posted by dragonjools at 7:35 p.m. No comments: 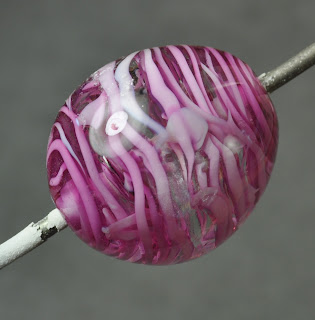 Here's a good way to use filigrana.

Filigrana - if you are new to this, is a commercially made glass rod (from Effetre) that is a coloured core with a clear outer layer. You can, of course, make your own, but having lots of consistent rods open up some creative possibilities - such as, making hollow beads!

This hollow was made with pink filigrana - which is actually a white core, with a layer of transparent pink, and then a clear encasing. Some of the filigrana colours are simply an encased colour, but a few are actually 3 layers. You can see in these photos, the pink over the white. It makes for a more interesting and complex look. 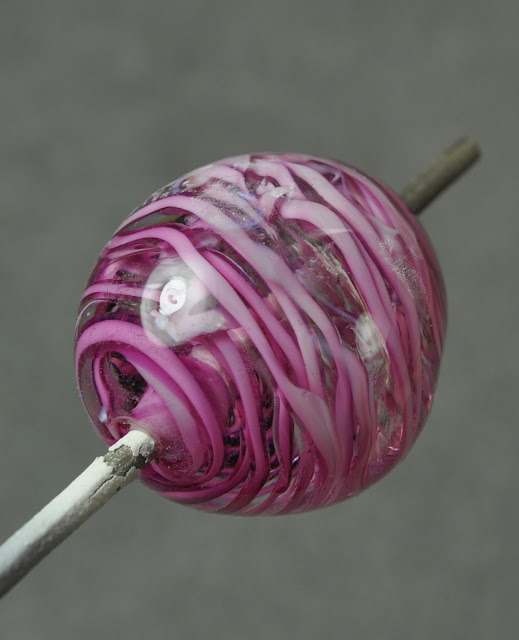 Another neat variation is to make one disk in one colour and the other in a different color.

Over the years - you pick up some info about the metals used to make the colour in glass. You learn early on that gold makes pinks and purples - and when the price of gold shot up - we saw the price of the purples and pinks shoot up too.

The ivories and yellows are sulfur-based - and they react with the copper-based colours - the greens and turquoise blues.

Tin gives you white, and manganese gives you black, and some of the browns are made with gold too. Chrome was used for the reds - although for health reasons - other elements have been found. Ditto for the colour we know as cobalt blue.

However, while reading Discover1  - I came across a very interesting article on the "Rare Earths" - a category of elements that are neither particularly rare nor earthy. It's a good article - worth reading.

However - the part that really grabbed my attention was this passage:

Glass doped with cerium oxide effectively absorbs ultraviolet light ... . Two other rare-earth metals, neodymium and praseodymium, work their magic at the other end of the spectrum. They impede infrared light and so are incorporated into welders' goggles to protect workers eyes from the heat. These oxides also absorb yellow and green, so glass made with them has a characteristic mauve tinge.


Geez  - could you describe our didymium lenses any better? Ooo - Di - meaning two - neodymium and praseodymium.

But wait - it gets better.


So think about those fabulous new pinks that we have seen, like the Pinks from CiM - Gelly's Sty - a pink like no other in any of the other glass palettes.

I realized that this information may not buy you anything - but I still think it is fabulous to know this stuff!

I've reviewed Magic before, but here it is again anyway.

This is a 104 glass from Reichenbach. It's kind of a nondescript opaque brown rod - but it can do some pretty interesting things.

This was a black base, magic, encased, and mashed. 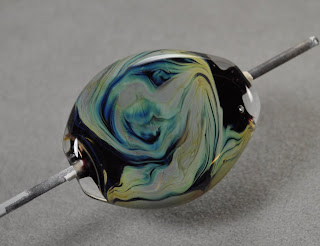 This is the other side of the same bead. Personally - grey and yellow are not a winning combo - so this side is not doing it for me. It looked better when it went into the kiln. 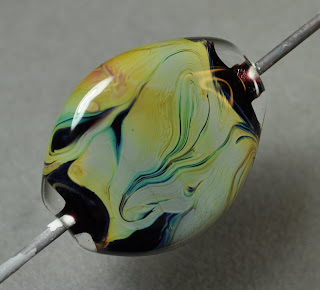 This one, and the rest of them here, are done with stringer and not encased.  It seems that more is less, and less is more. I'm  using it like Raku - heat it a lot, cool it quickly by mashing or marvering. 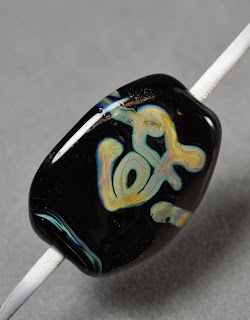 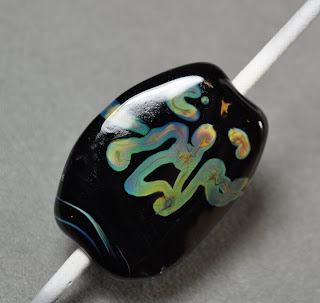 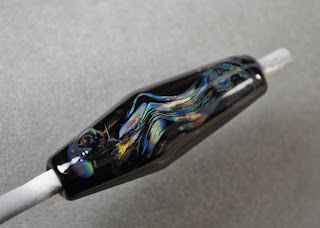 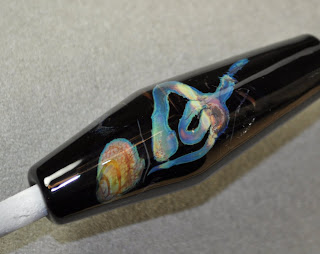 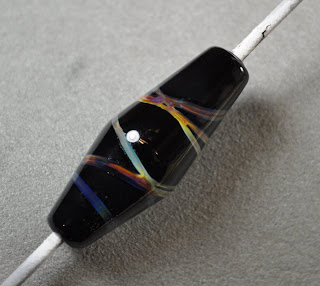 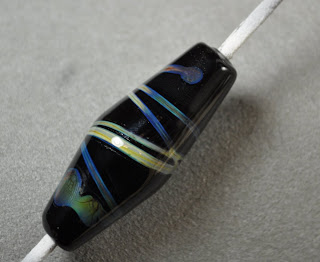 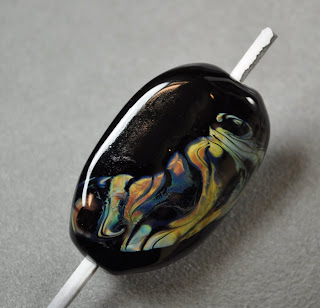 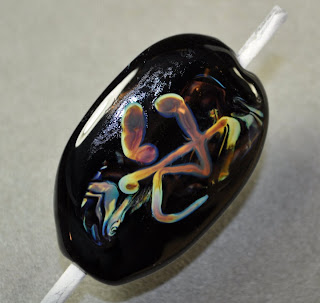 The figure playing the drums is pretty cool - and completely accidental. The blue in the back ground is actually not from the magic - it might be Kronos, I think. I don't appear to have recorded what it was. 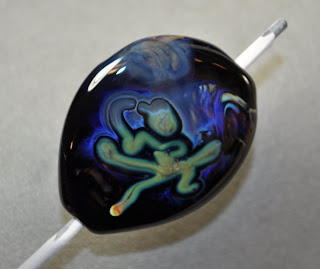 This one has a patch of silver foil on it. 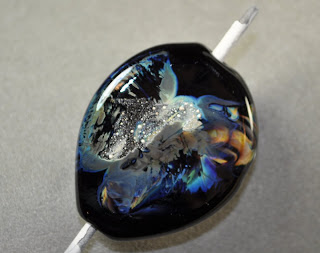 Definitely go for smaller amount for more colour drama. Why that should be - I don't know. Maybe it thins out better? Cools faster? Maybe all the interesting stuff happens at the boundaries. 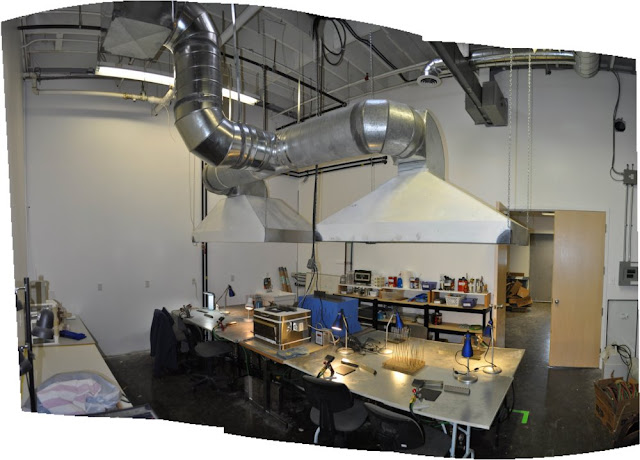 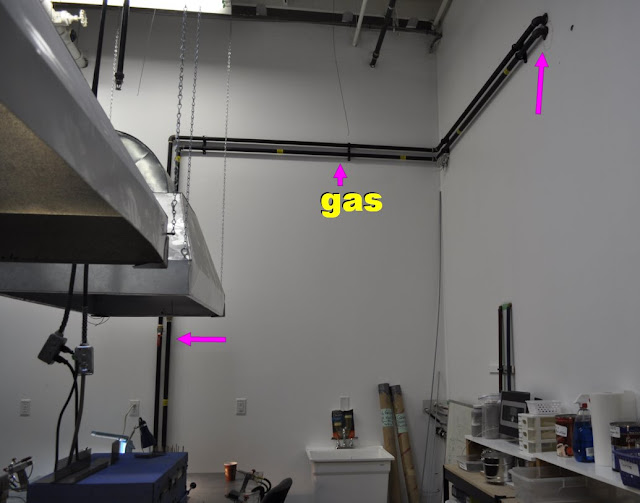 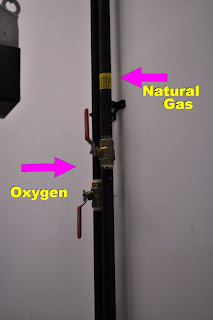 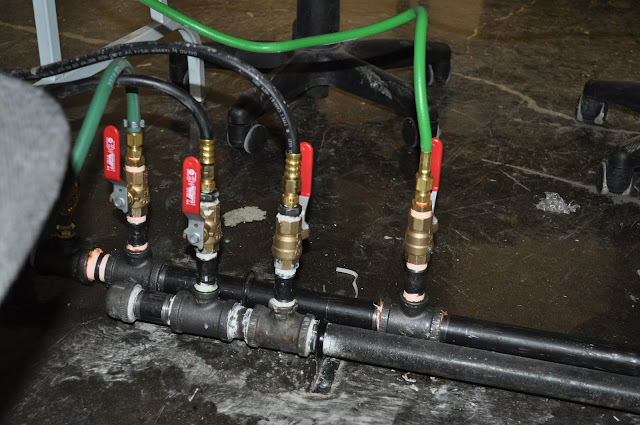 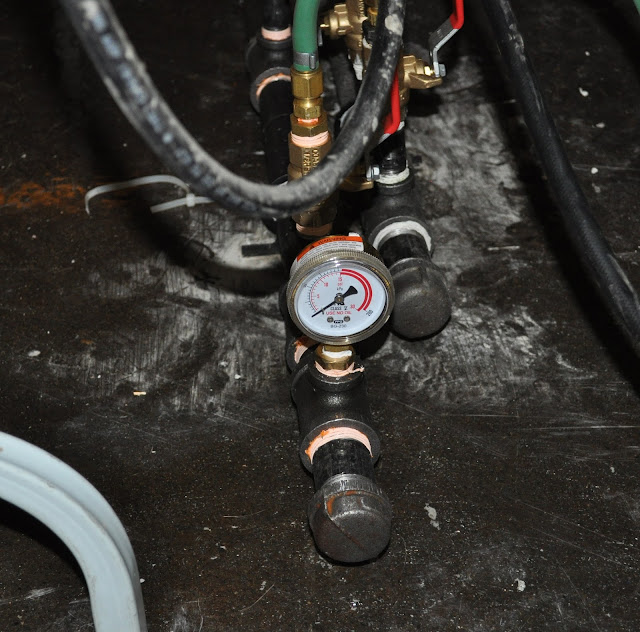 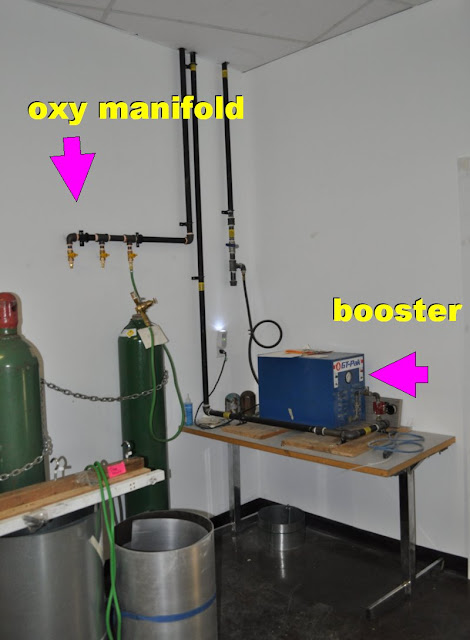 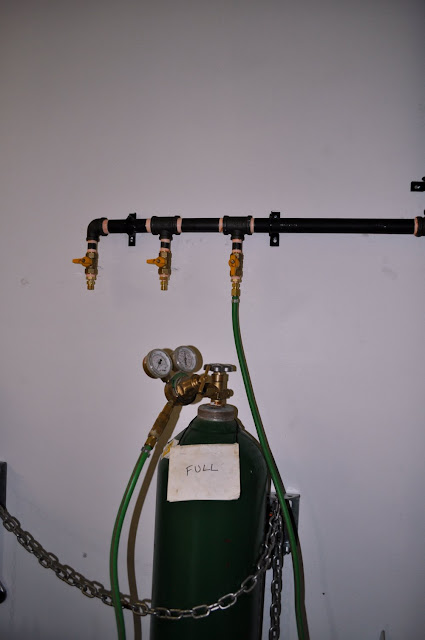 Posted by dragonjools at 9:29 p.m. No comments:

Had to christen it, right? Baptism by fire? Anyway - this shot turned out pretty cool. Love the way you can see the heat coming off the flame. 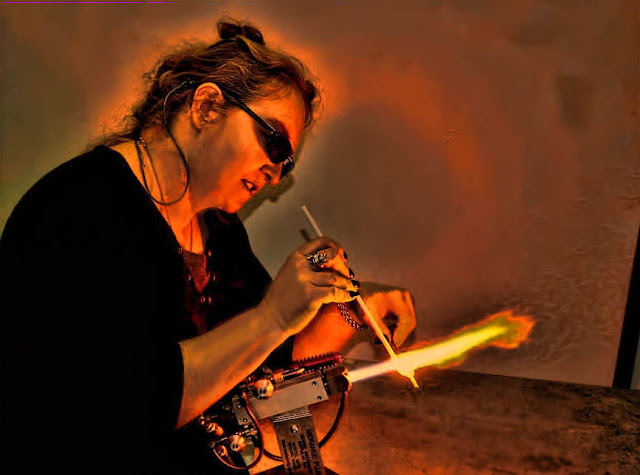