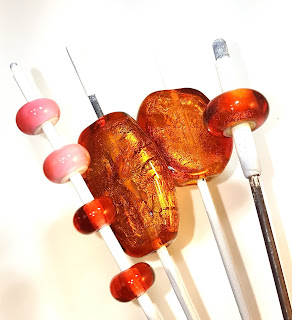 Double Helix Lotis - Double Helix calls it a "A pink version of Rhea. A lead free gold pink that plays well with silver colors and survives a reduction flame without discolorations."

Lotis was a nymph in Greek mythology, just in case you were questioning the spelling.

As I considered Rhea to be pink, I'm guessing that this is a lighter version of Rhea. I think the rods might be slightly less intensely coloured.

I find that the colour shifts a little depending on the light source - hard to quantify.

These spacers, on the right, over white, are clearly and obviously pink. The self coloured spacers on the left are a lovely colour but less in the pink category and more in the ... claret? Sherry? 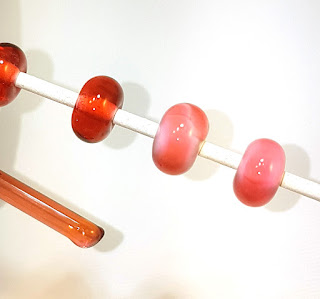 This is a big hole bead, base of white, silver foil* applied to half, encased Lotis. 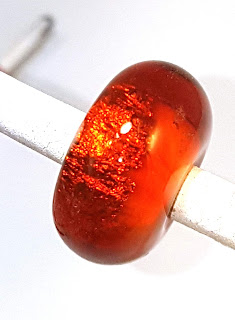 Here, a base of clear (I think it was Zephyr), rolled in silver foil, burnished and encased in Lotis. You can see that I got a significant amount of fuming from the silver foil which has resulted in a lot of the glass/foil combo appearing to be gold. 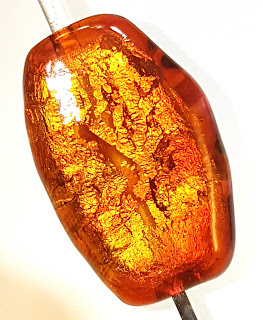 This one was a base of Effetre clear, silver foil, and encased in Lotis. Again, significant fuming - but I was using the Nortel Arrow, which delivers significantly more heat for the amount of oxygen used than the Mid-Range, so it is possible that not using a clear base and working cooler might get you less of the gold effect. 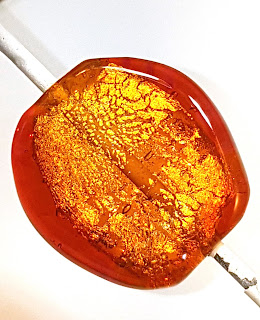 Regardless - the gold is very pretty.

Lotis does, in fact, play well with silver foil. Anyone who has ever directly encased silver foil with Effetre Rubino Oro will be delighted with Lotis.   ;-)

*For those of you new to lampworking, you should know that all references to silver foil mean pure silver, 99.9%, not sterling silver, which will just go black in the flame as the copper in the sterling instantly reacts to the flame. It also does not mean the mylar films that are silver coloured that you might have considered purchasing from the local craft store.  They just burn.