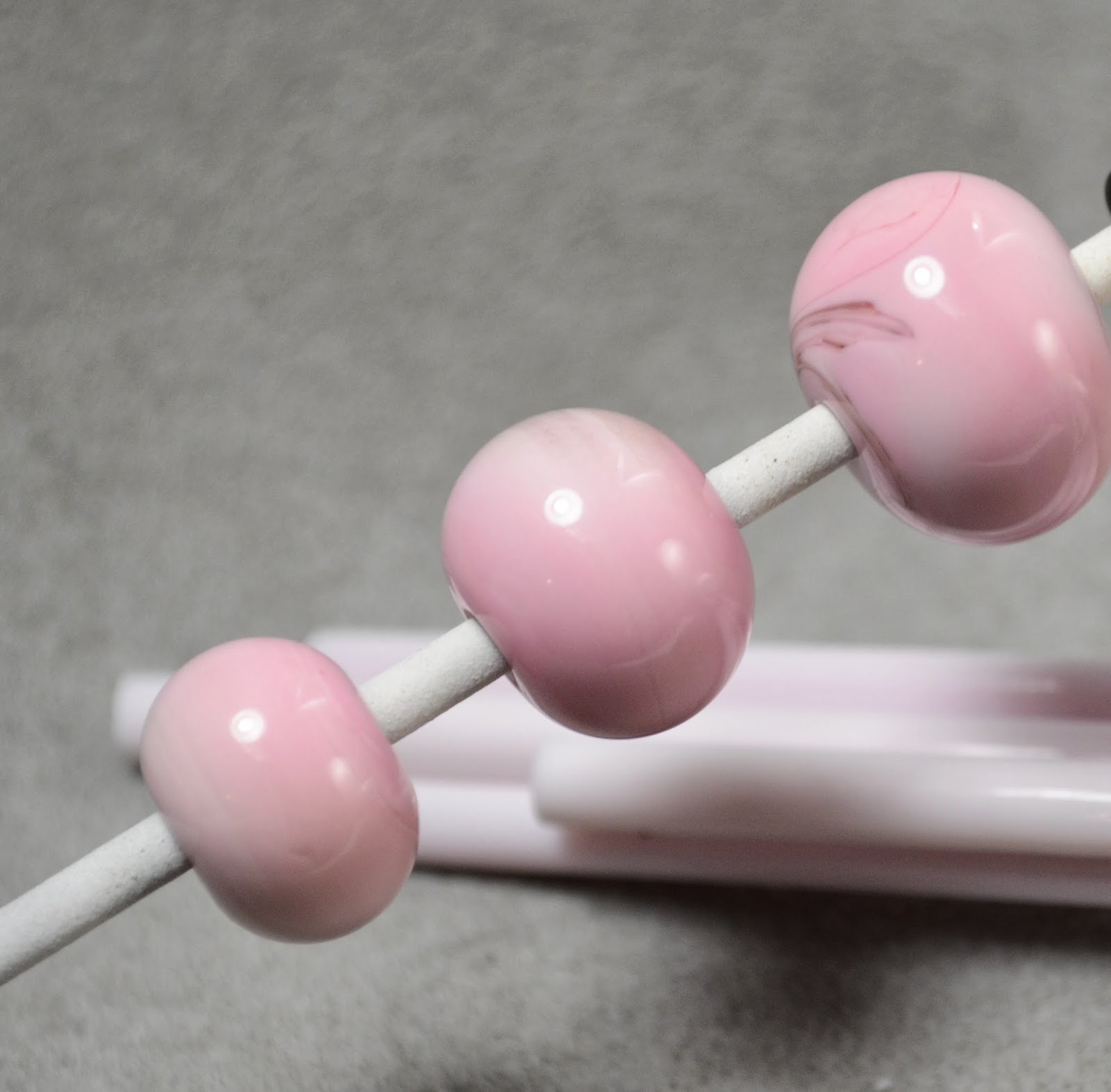 Angel Pink is a pale rod that strikes up to a nice rose pink. It can be streaky - and it can also develop an odd grey blush.

On the face of it - it strikes quite nicely to a fairly rich pink. I didn't do anything particularly to strike these - and I have had trouble with this glass in the past, being hard, no, make that impossible, to strike. This, however, struck up nicely.

The streakiness that you see on the right-most bead almost looks like a ribbon of transparent in the opaque - not particularly uncommon.

However, if you look at the bottom third of the middle bead in this picture - you can see a smokey, sooty looking patch. 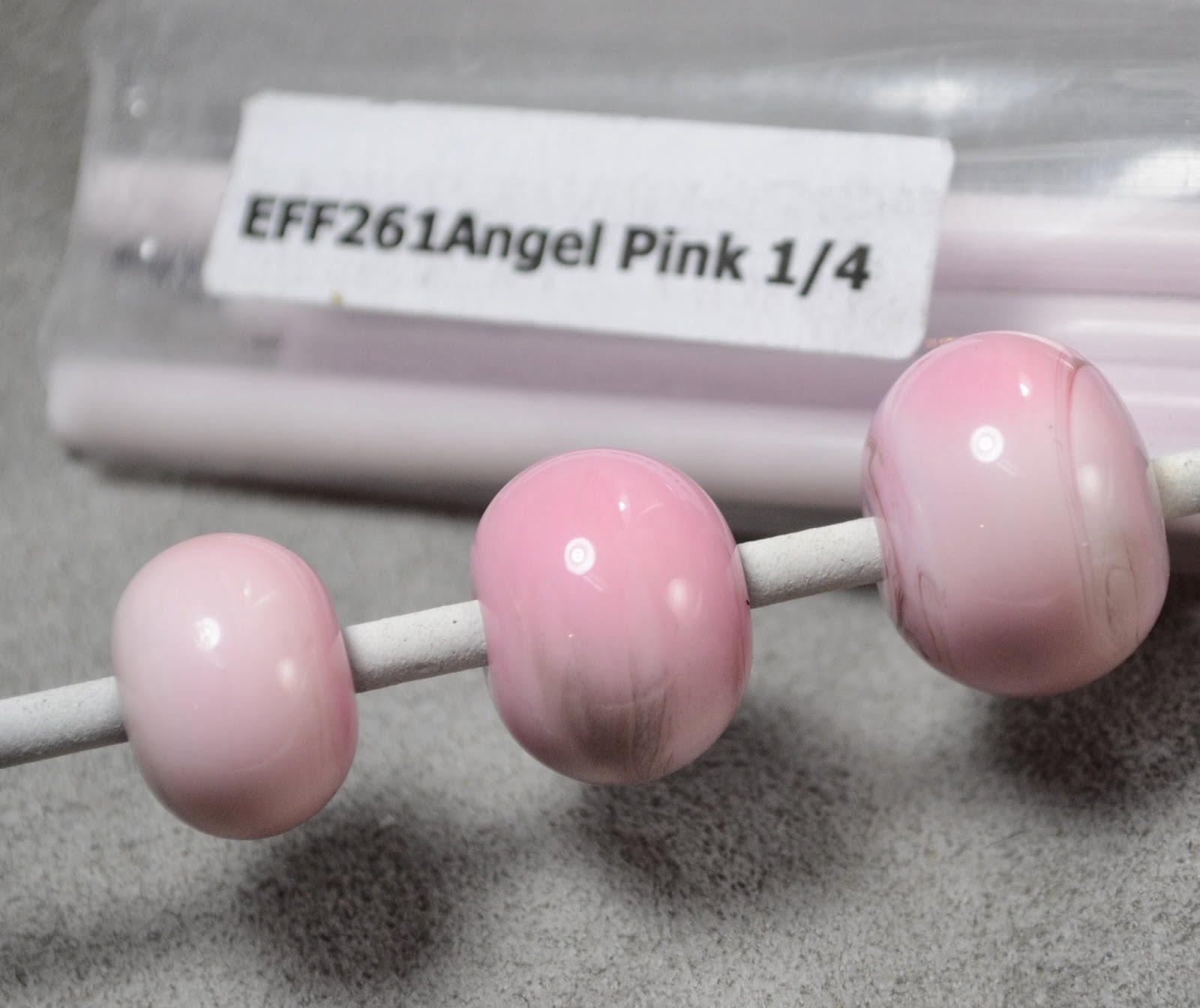 Here is the tail end of that patch. 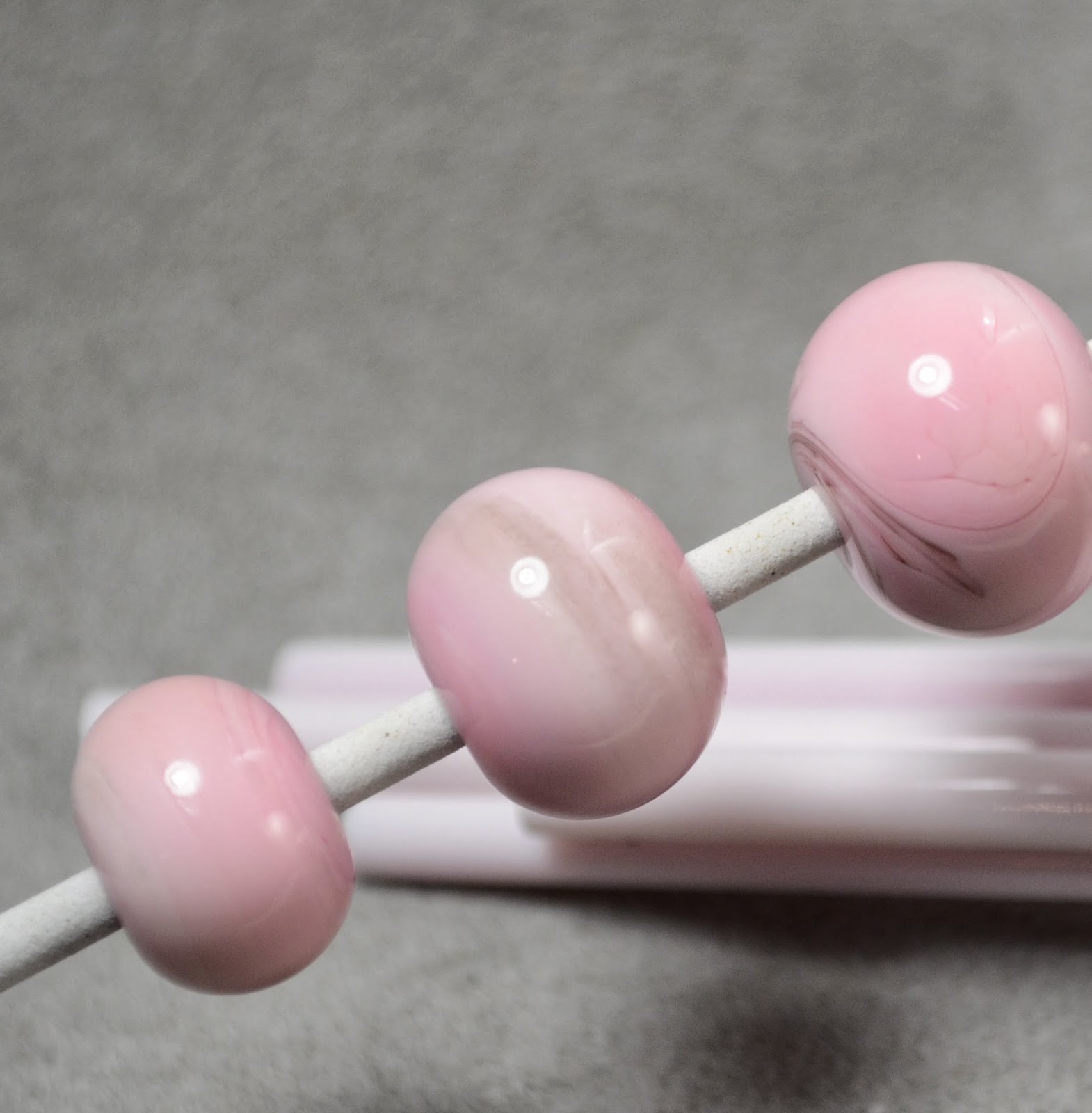 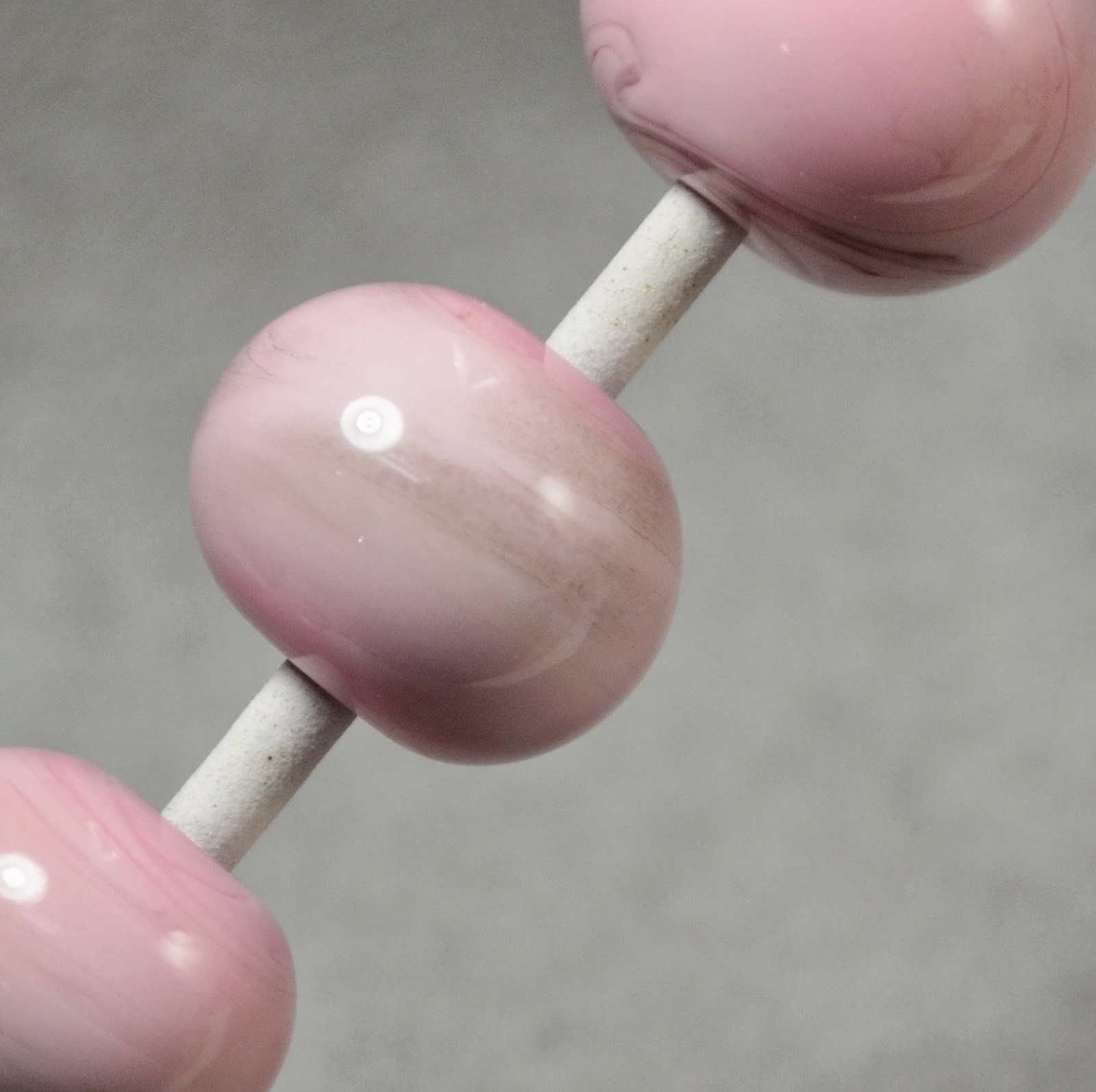 What the cause of this is, I don't know.

Overall - this is a pleasant shade of pink - but I would experiment with it before I committed to, say, a production run of pink-skinned angels - in case they came out with grey, smudgey cheeks. Now - if you were making little Victorian-era chimney sweeps and flower girls - it might be absolutely perfect - other than the whole complete-randomness factor. Or maybe you'd learn to control it?

Or pigs? With smudgy, muddy bits? Wilbur and Charlotte, anyone?
Posted by dragonjools at 10:27 a.m. No comments: 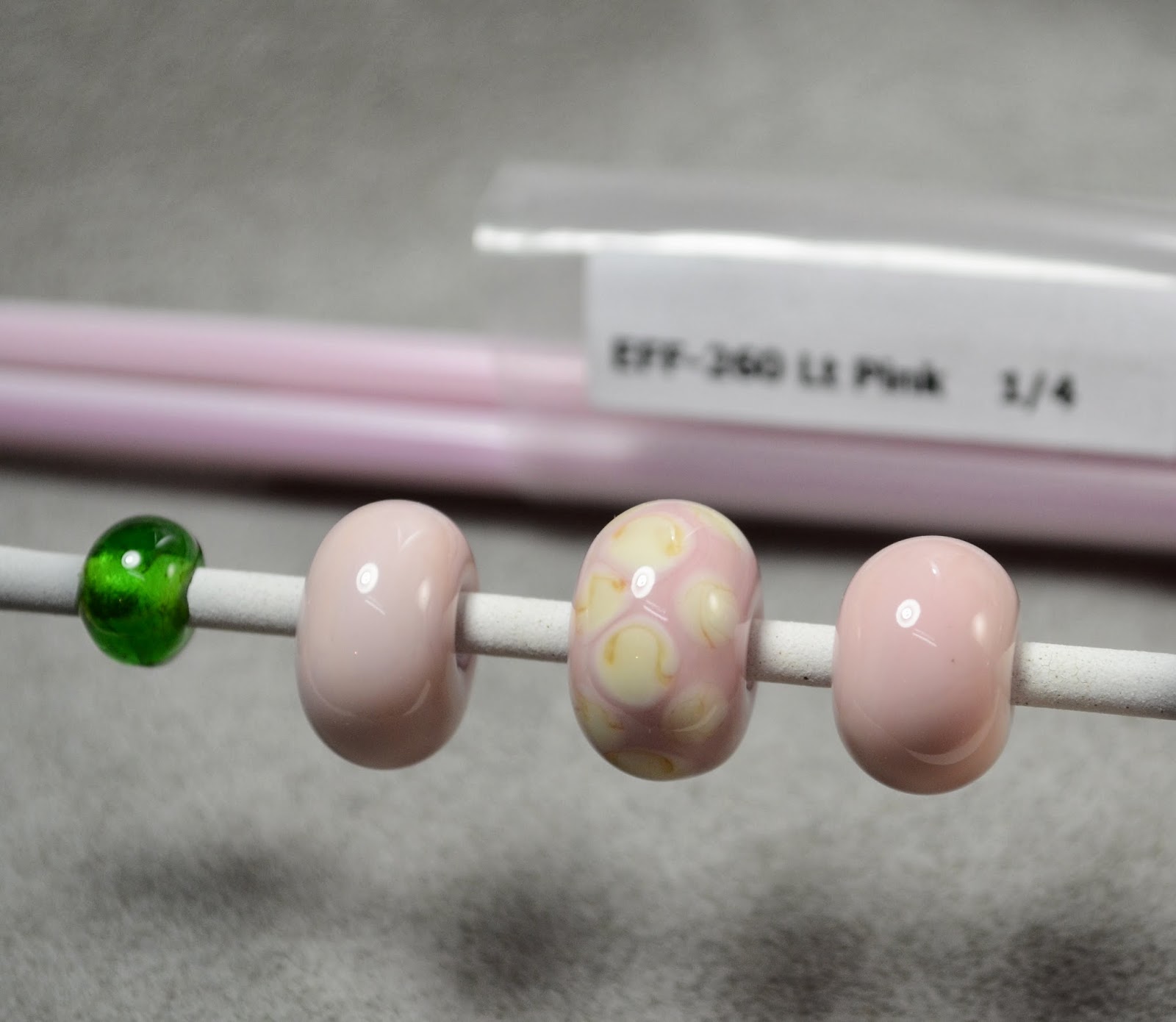 I mentioned using Eff 260 Light Pink the other day - and so you might want to see want it looks like.

Effetre Light Pink is a pale, dusty pink. In the photo here, it appears to be peachier than the rods - but that is an illusion - in life - it is pretty close to the unworked rod colour.

The two beads on the outside (not counting the transparent green marker bead - this is how I keep them identified after they come out of the kiln) are self-coloured. The middle bead is a core of Light Pink and has Ivory dots.

Light Pink is a good choice for all those angel and fairy beads. It is a nice, well-scrubbed, happy face colour.
Posted by dragonjools at 10:22 a.m. No comments: 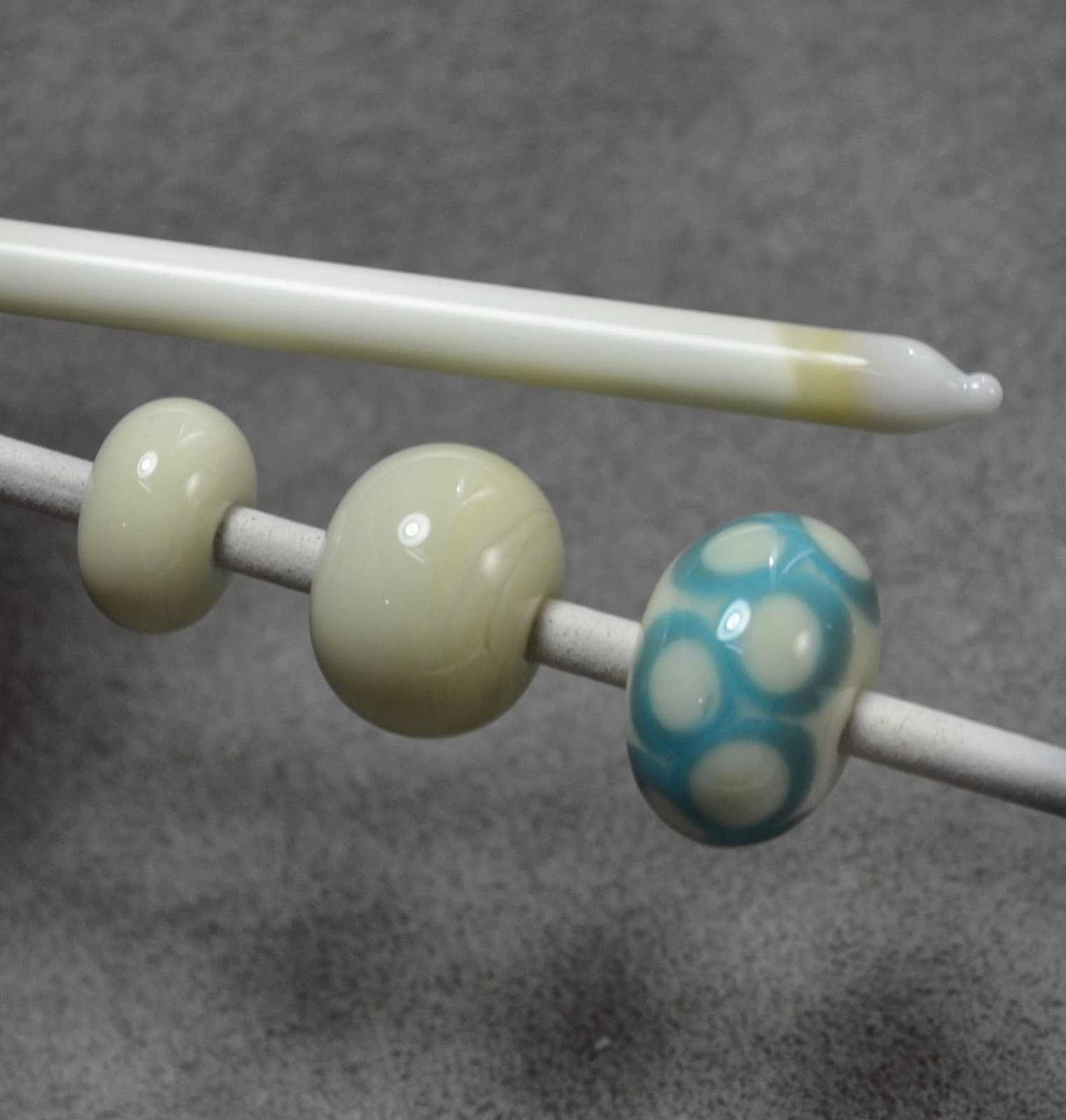 This is a pale, pale greenish colour - the name "Cake Batter" baffles me - I must be missing something, as CiM is generally very clever with their colour names.

With the 3xx series number - we know that CiM intends this to be in the yellow series of colours - but not even looking at it  looking at it in different colours of light shifts the colour.

You can see that the rod has changed colour with the heat - the tip is white, and the transition zone is more of a yellow - so it is possible that this colour is intended to strike to a yellow (which would be consistent with the name) - and I just didn't work it long enough, or at the right temperature.


From the left, two self coloured beads, and you can see a yellow dot on the middle one - which would be consistent with the striking theory. The third bead is a core of cake batter, dots of turquoise, and dots of cake batter on top. There is functionally no reaction between the two. 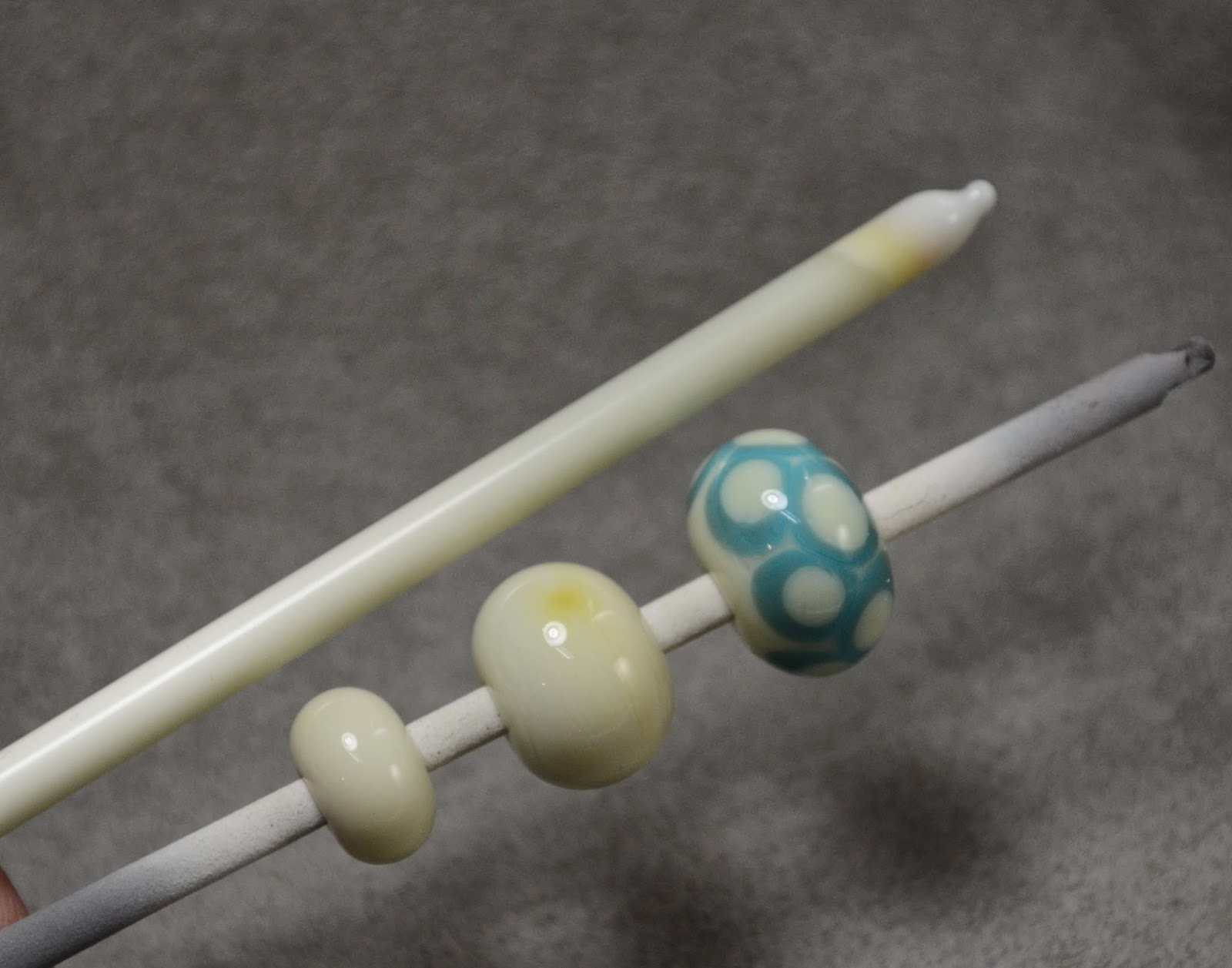 The rod does look "vanilla" when you are working it - but it cools naturally to a slight green. It would be worth trying to strike it to see if you can get a yellow out of it. Or possibly just work cooler than I do.  ;-)

Hands and feet are hard. Ever notice how often they get hidden in drawings and paintings?

And with the sculptural stuff - I have a hard time boiling it down to the essence - simplifying. Because piling on the detail is what I do.

But, for sculptural flameworking - that just doesn't work.

So I've been doing the equivalent of "studies" - like an artist drawing hands, feet, and faces, over and over. Sketching in glass, so to speak.

Here are some feet that I don't hate. 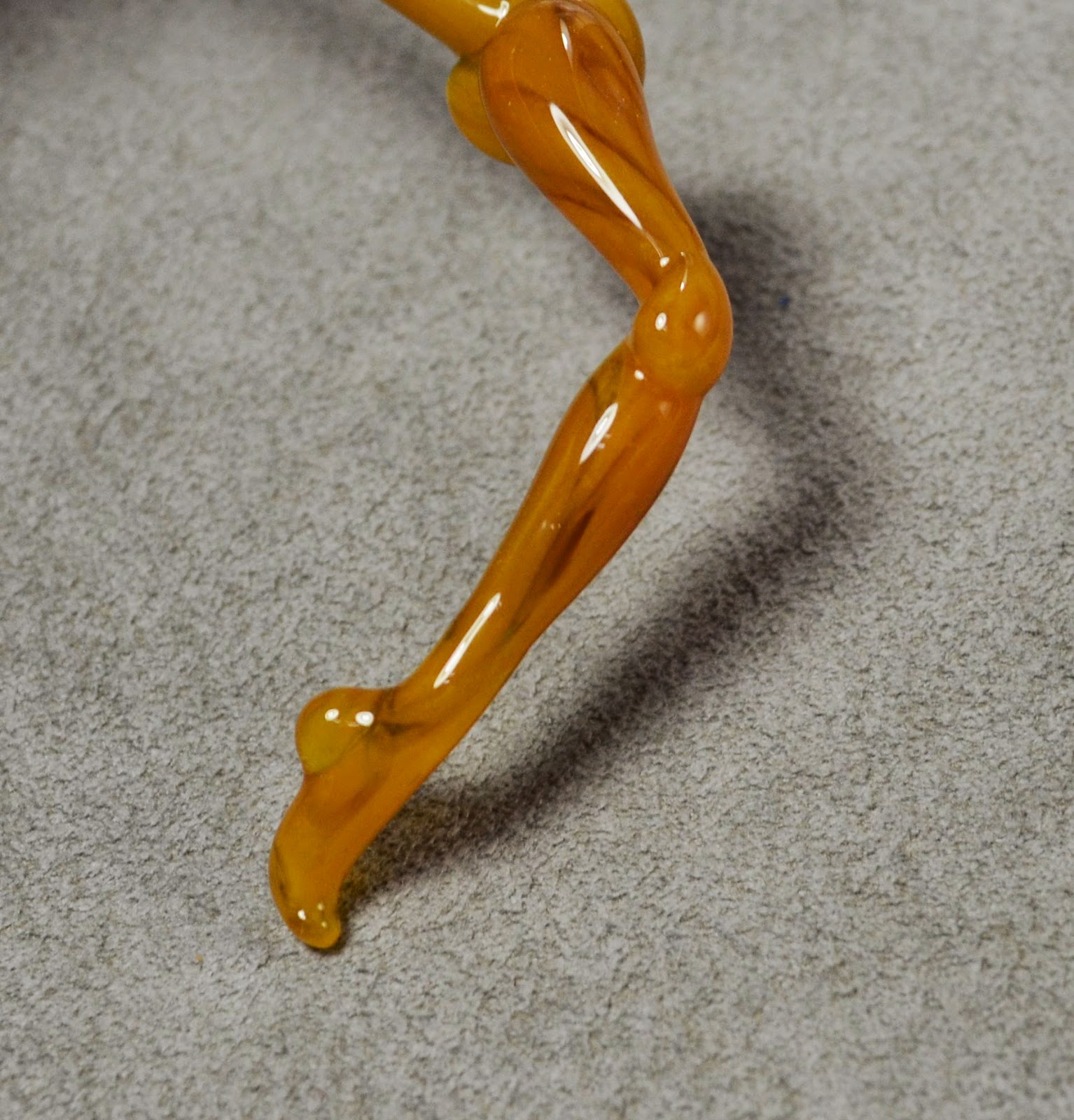 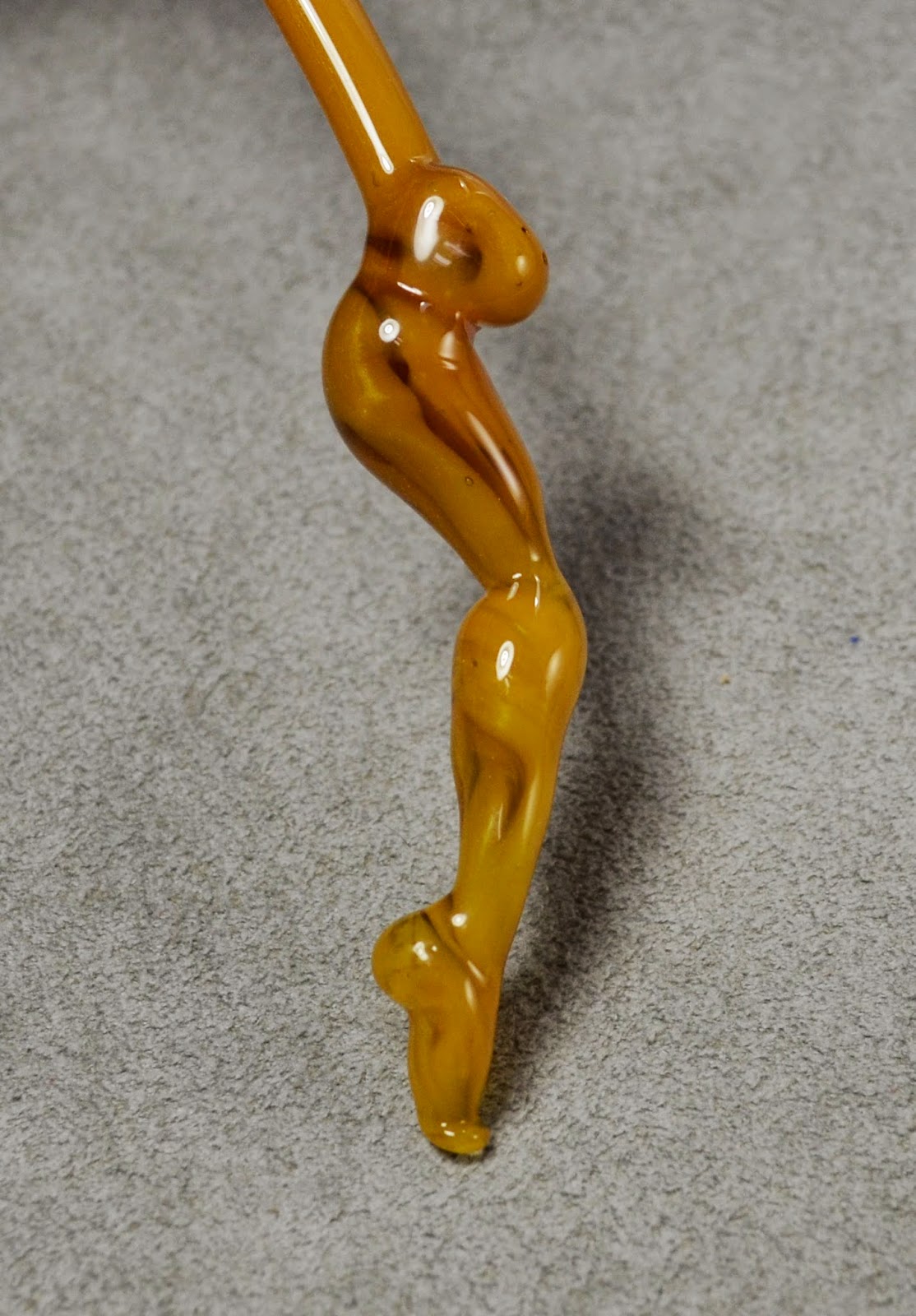 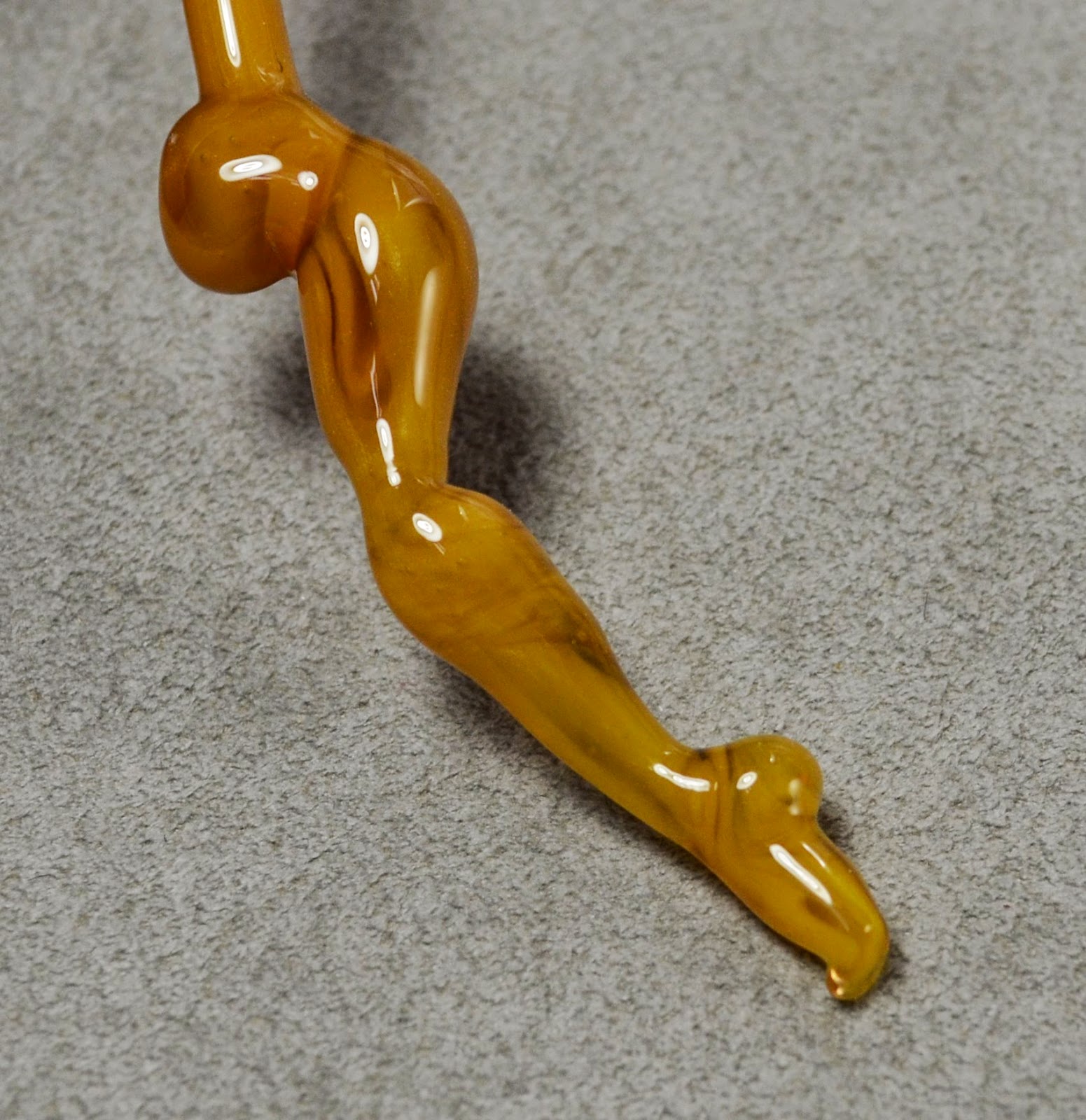 CiM Frangipani - a translucent, pale, misty pink. With the 6xx series number - we find that CiM considers it to be in the purple family, and calls "A very pale opal purple. Formerly Unique Crocus-2."

CiM has been re-naming it's Uniques as Limited Runs - which I think is a smart move. The original Crocus is a delight, definite purple - so yes, this totally deserved its own name.

I still don't see it as a purple, but there you go.

As an opal, it is translucent, and it is a very ethereal colour - getting more opaque the longer it is worked. All three of these beads are self-coloured, but the two on the left are more opacified as they have been heated and cooled more often. (I generally work from left to right on the mandrel - so that I don't block seeing what I am doing with the rod.) 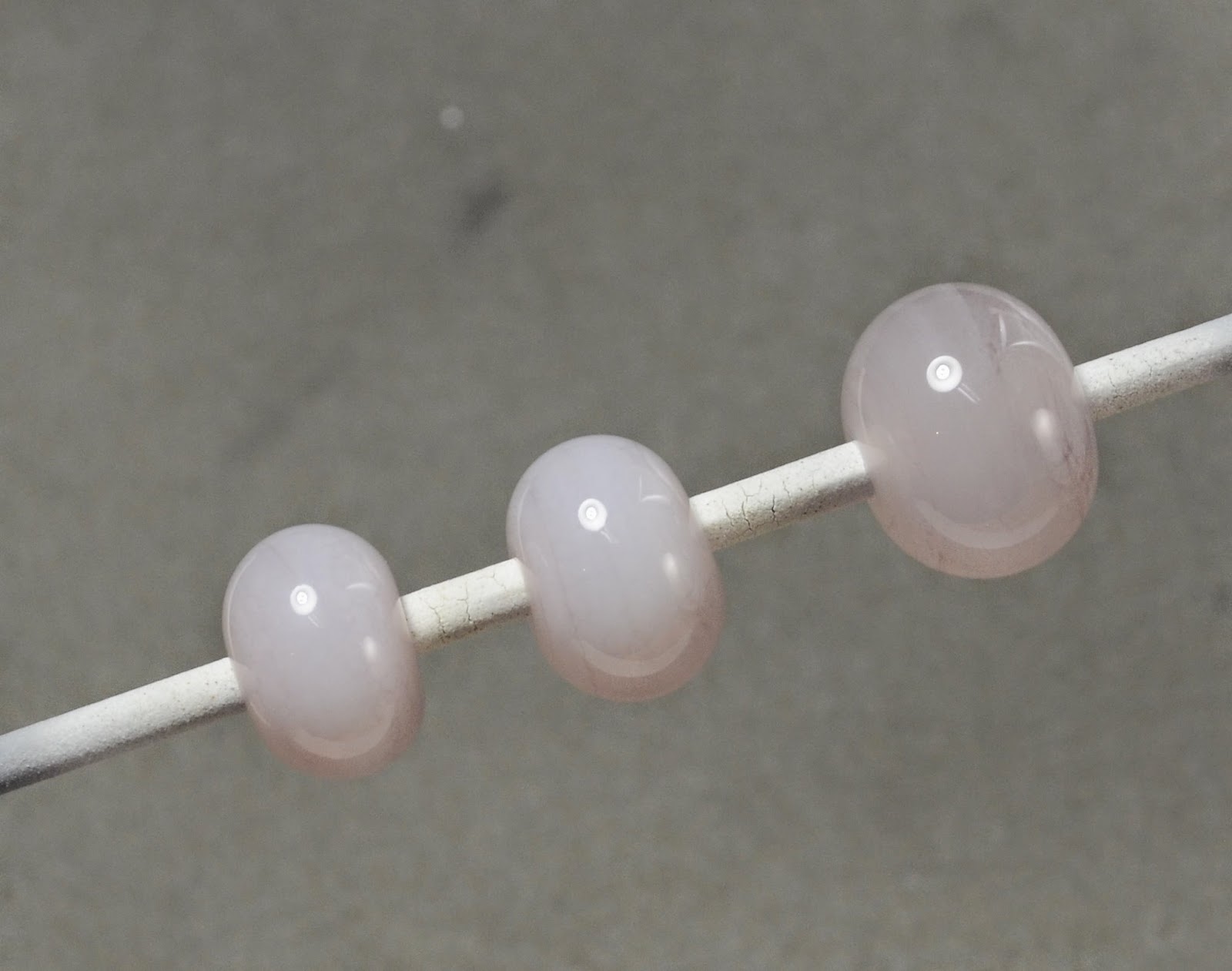 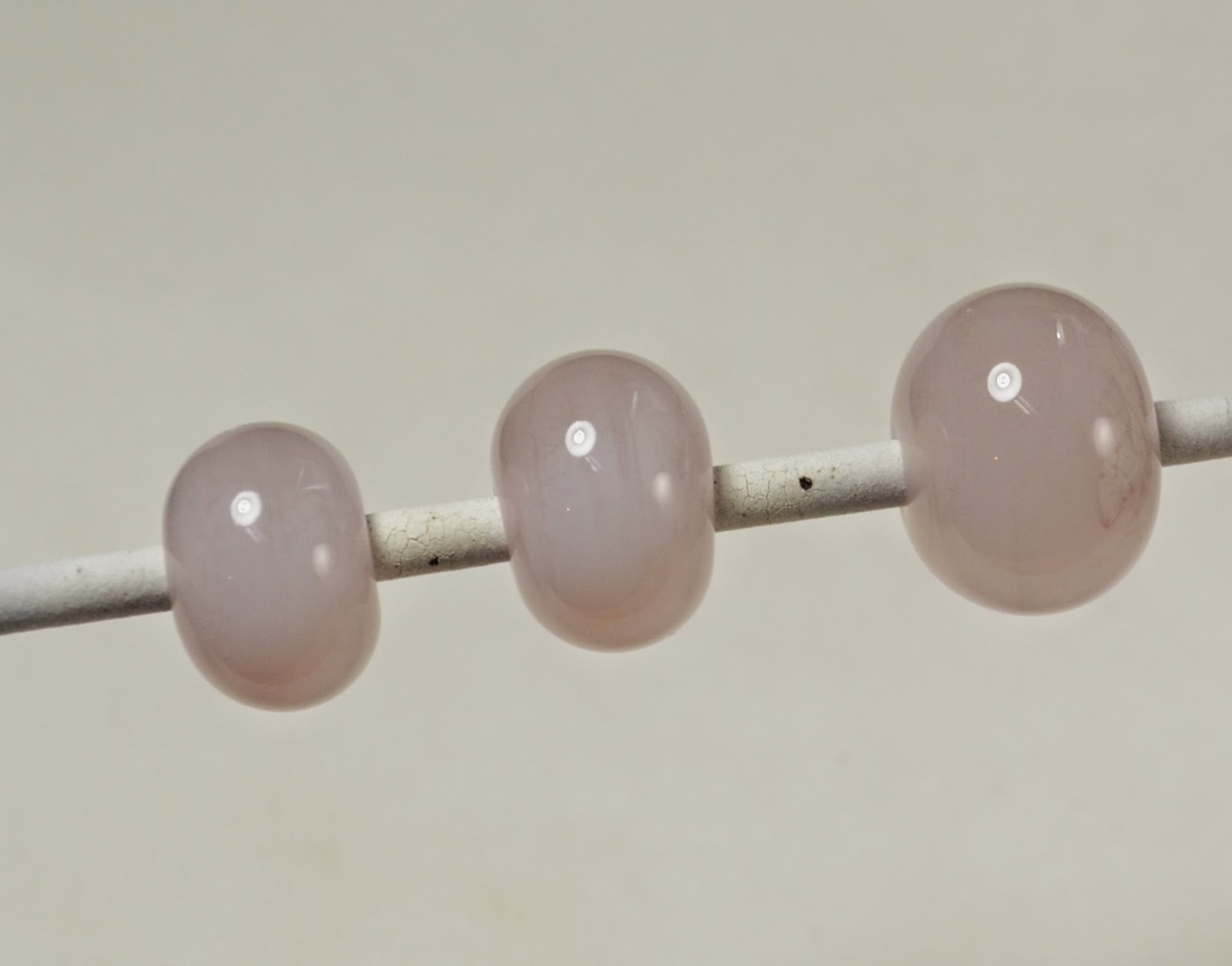 It would be interesting to make something like a sculptural flower with this. In a very thin application, this might not read as well - but if you can pull it off - you might be able to make something with a very delicate, otherworldly look to it. Just have to find the right colours to go with it. Equally delicate colours. 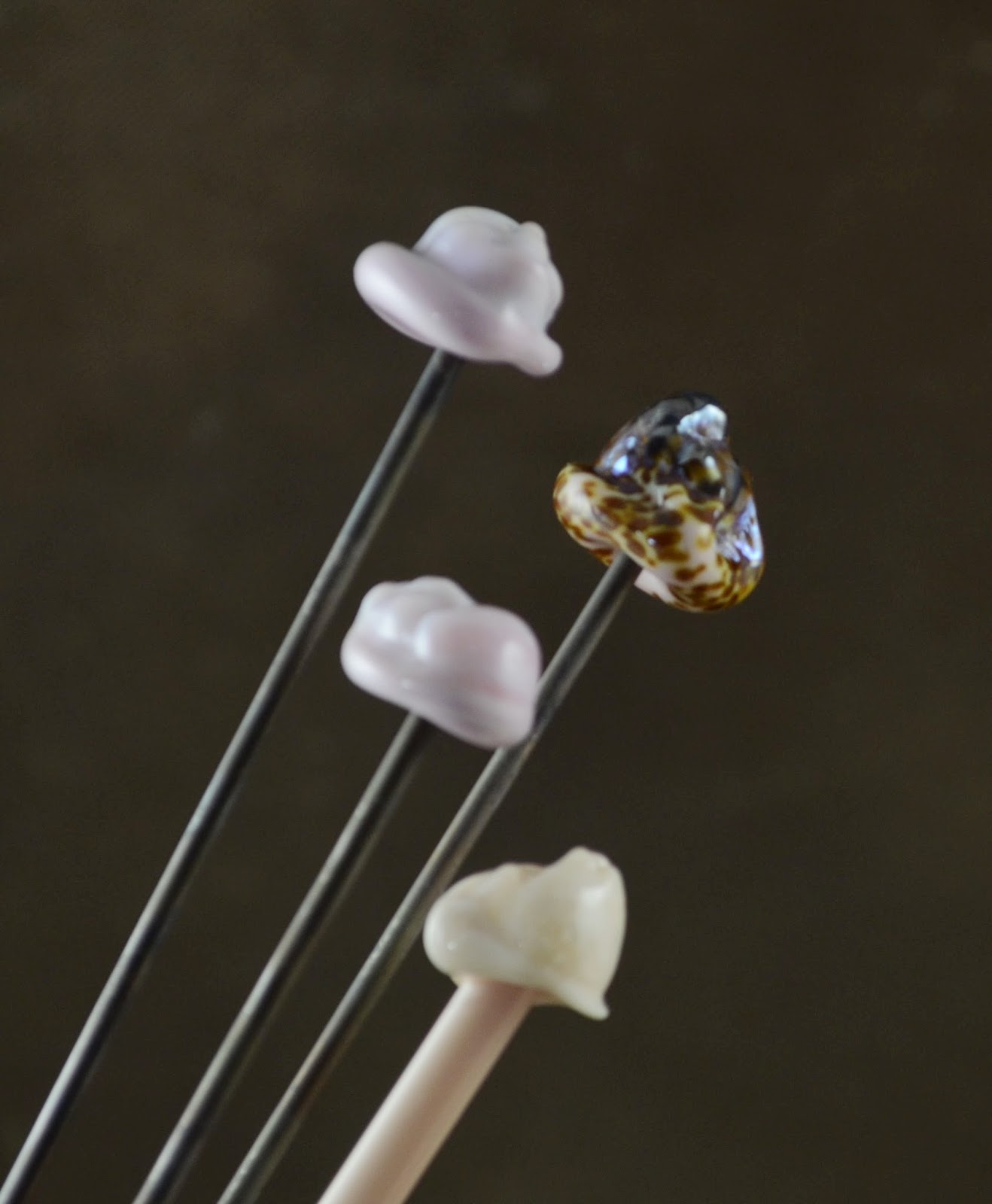 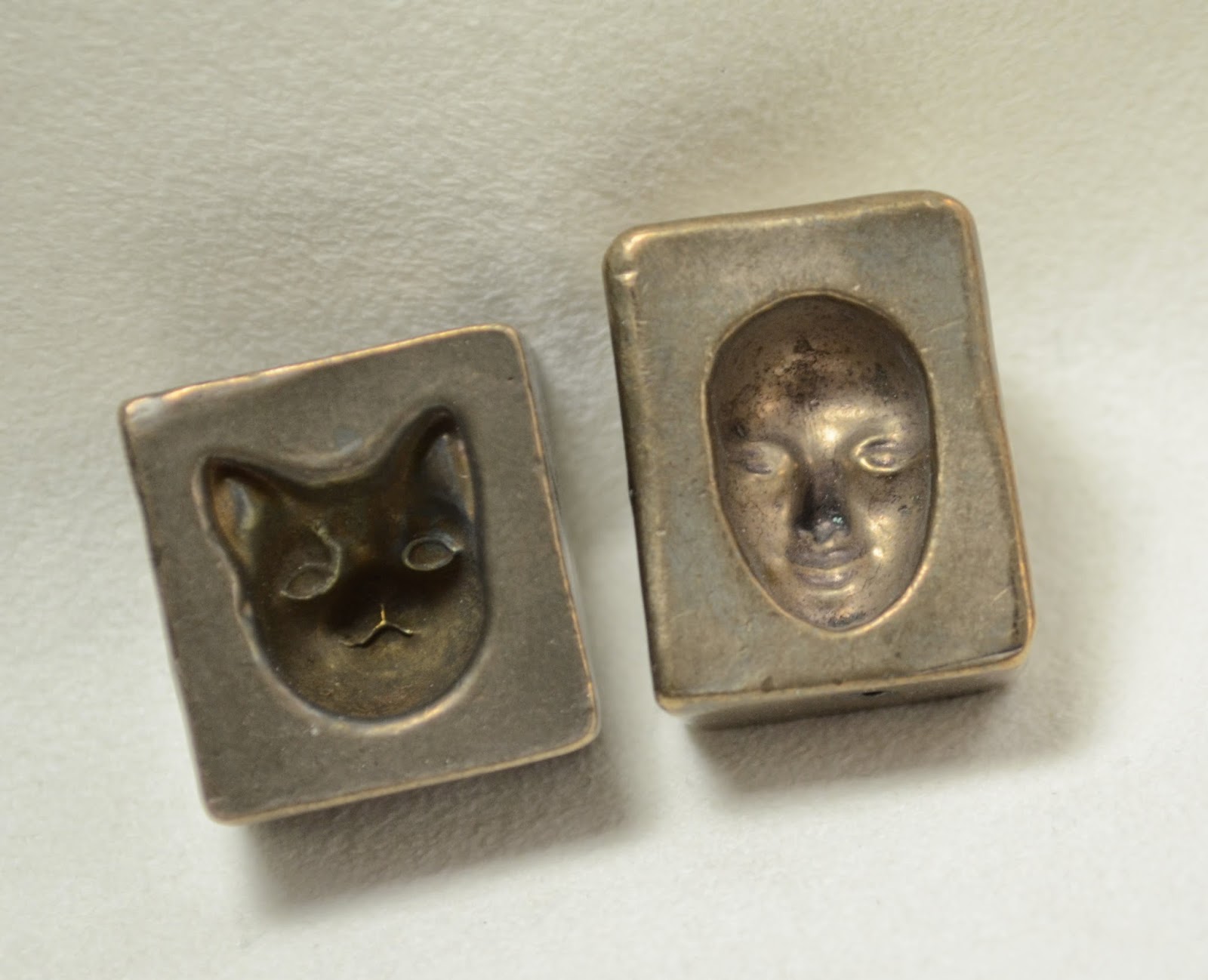 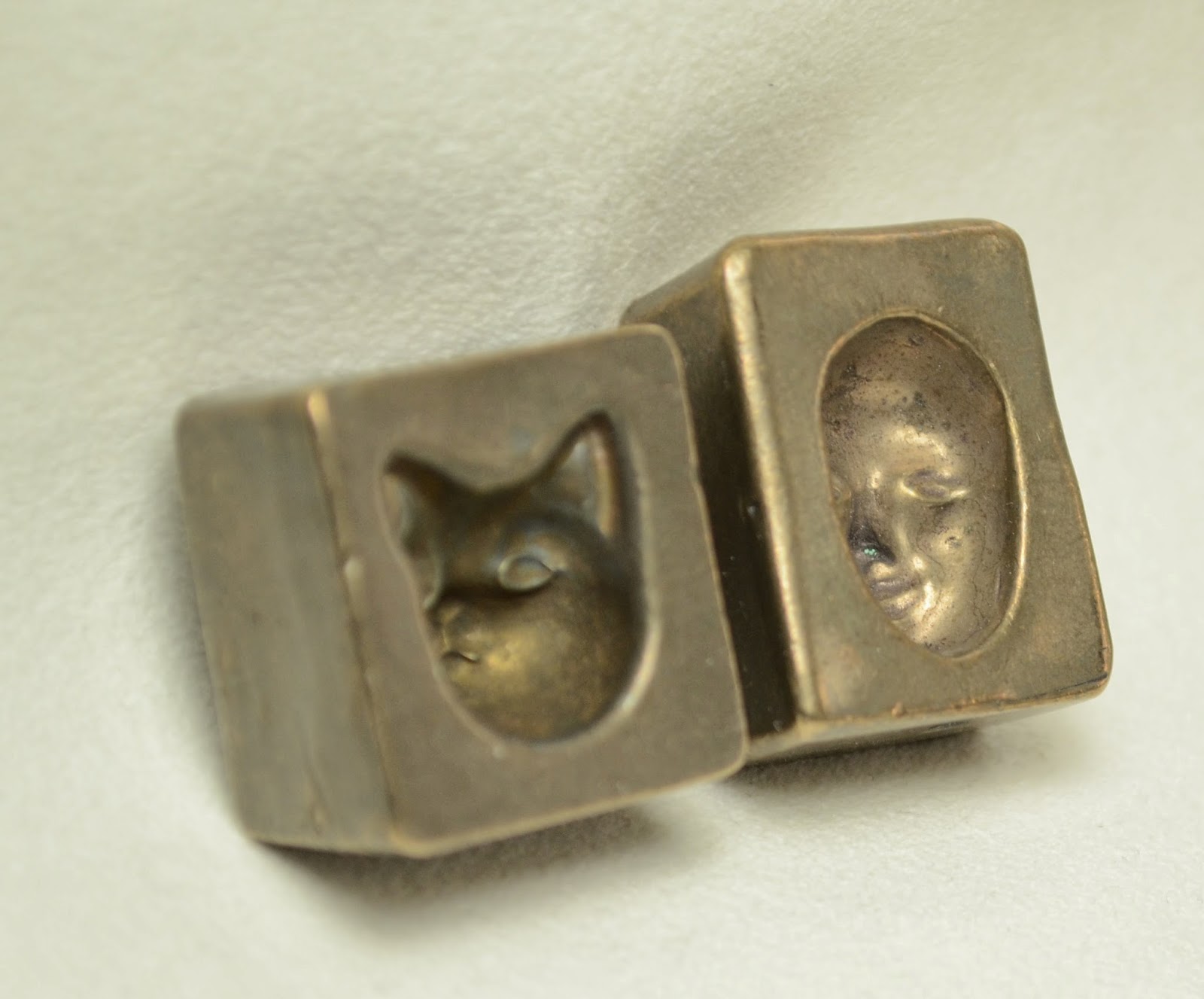 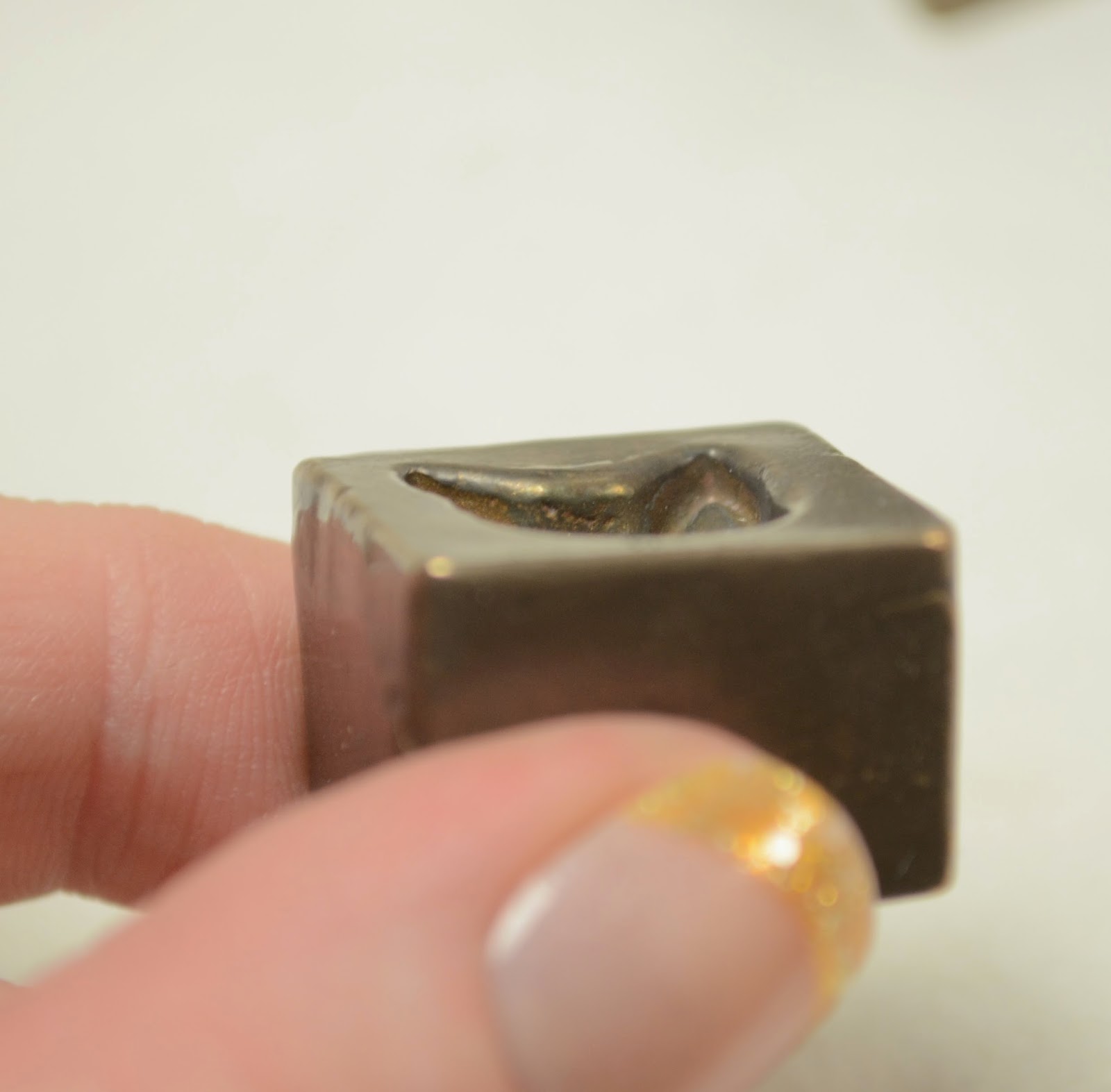 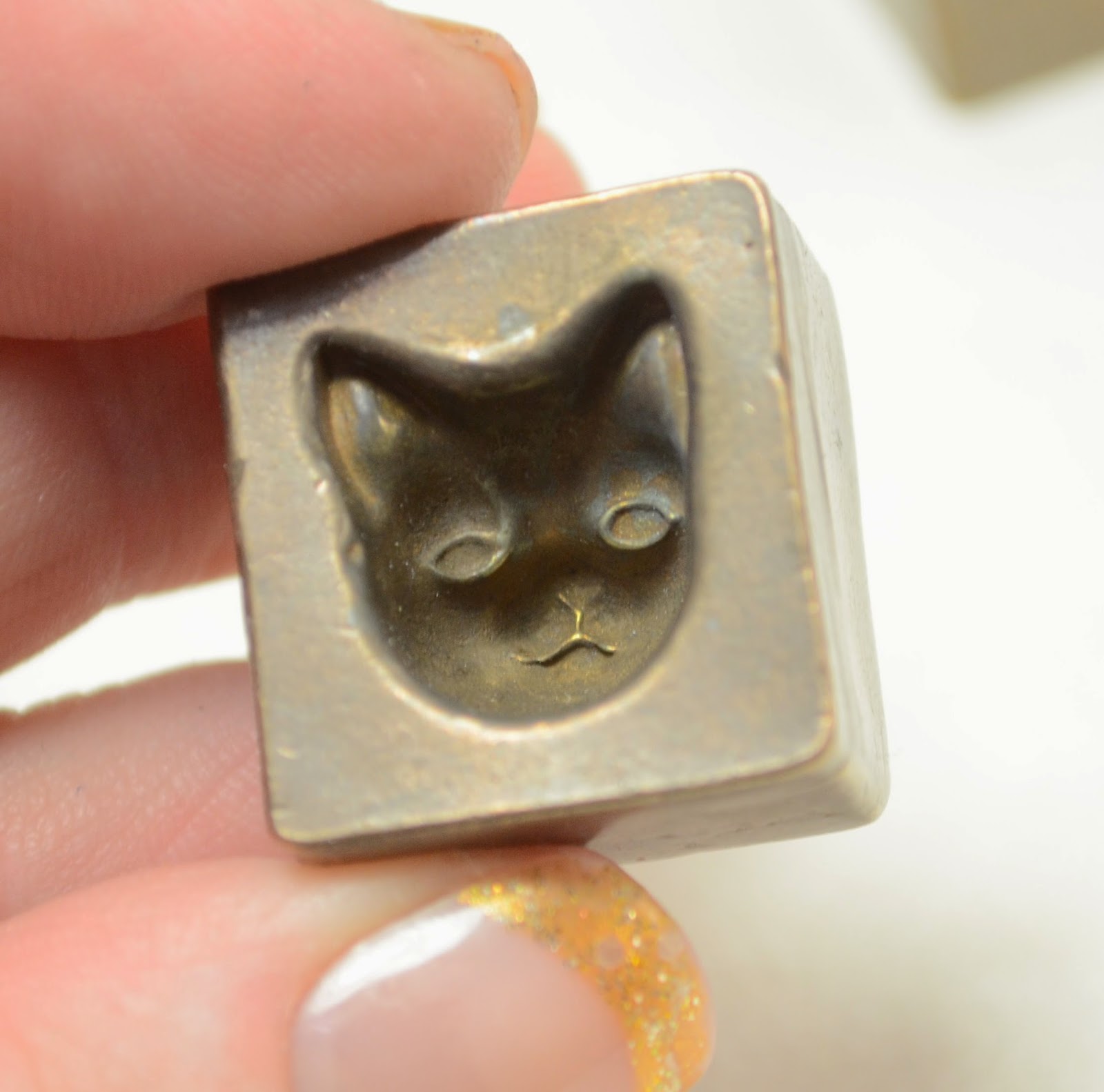 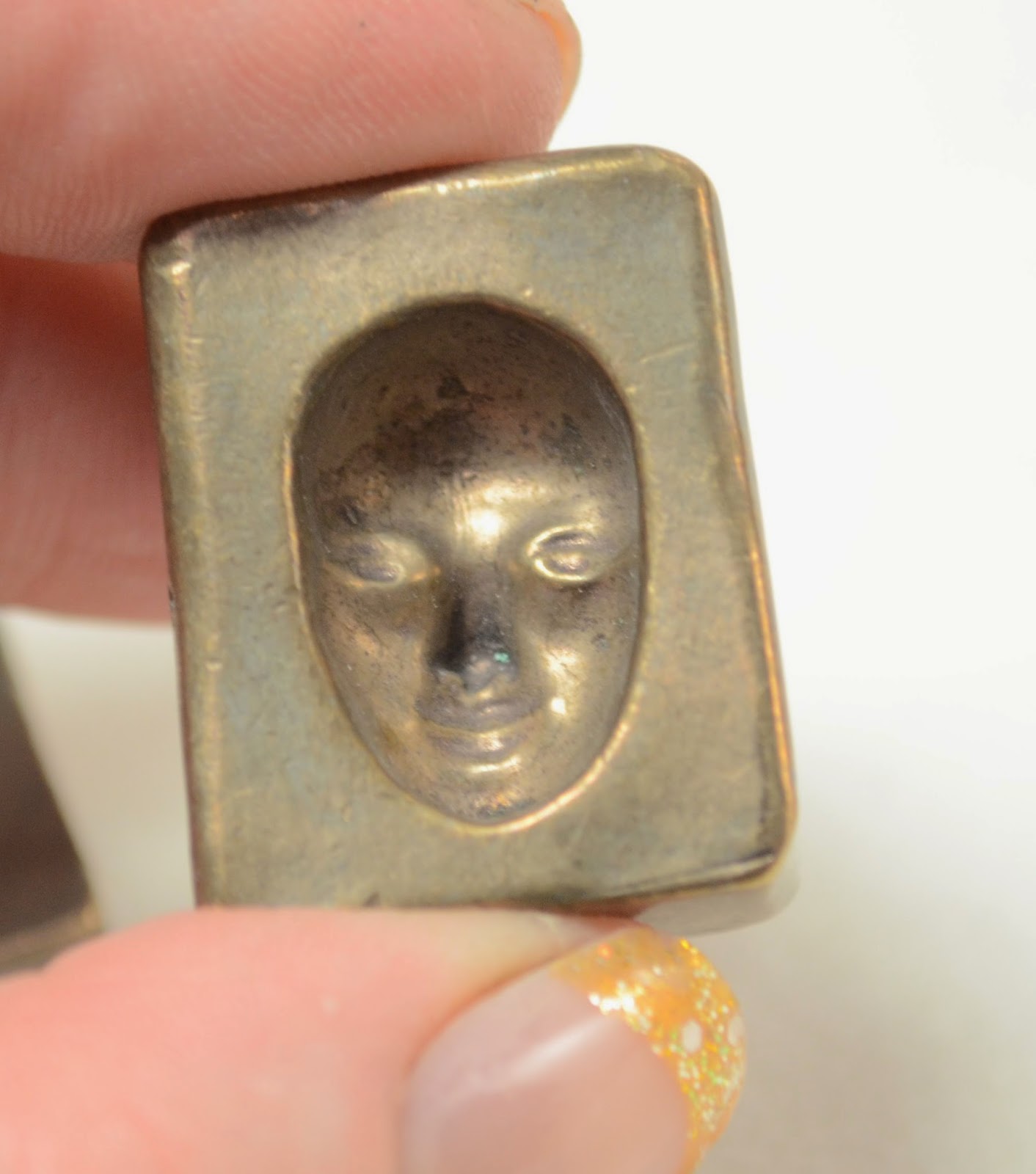 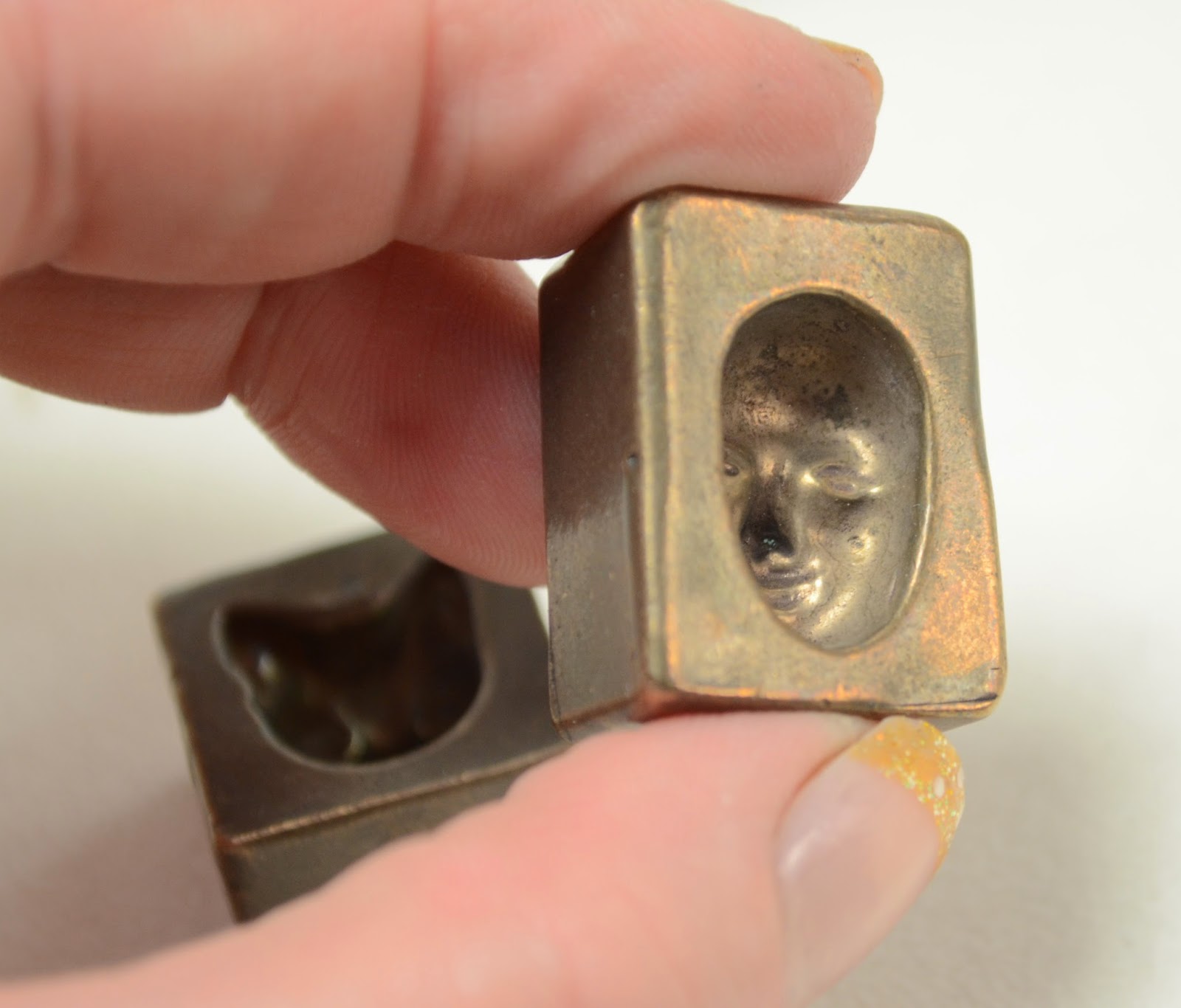 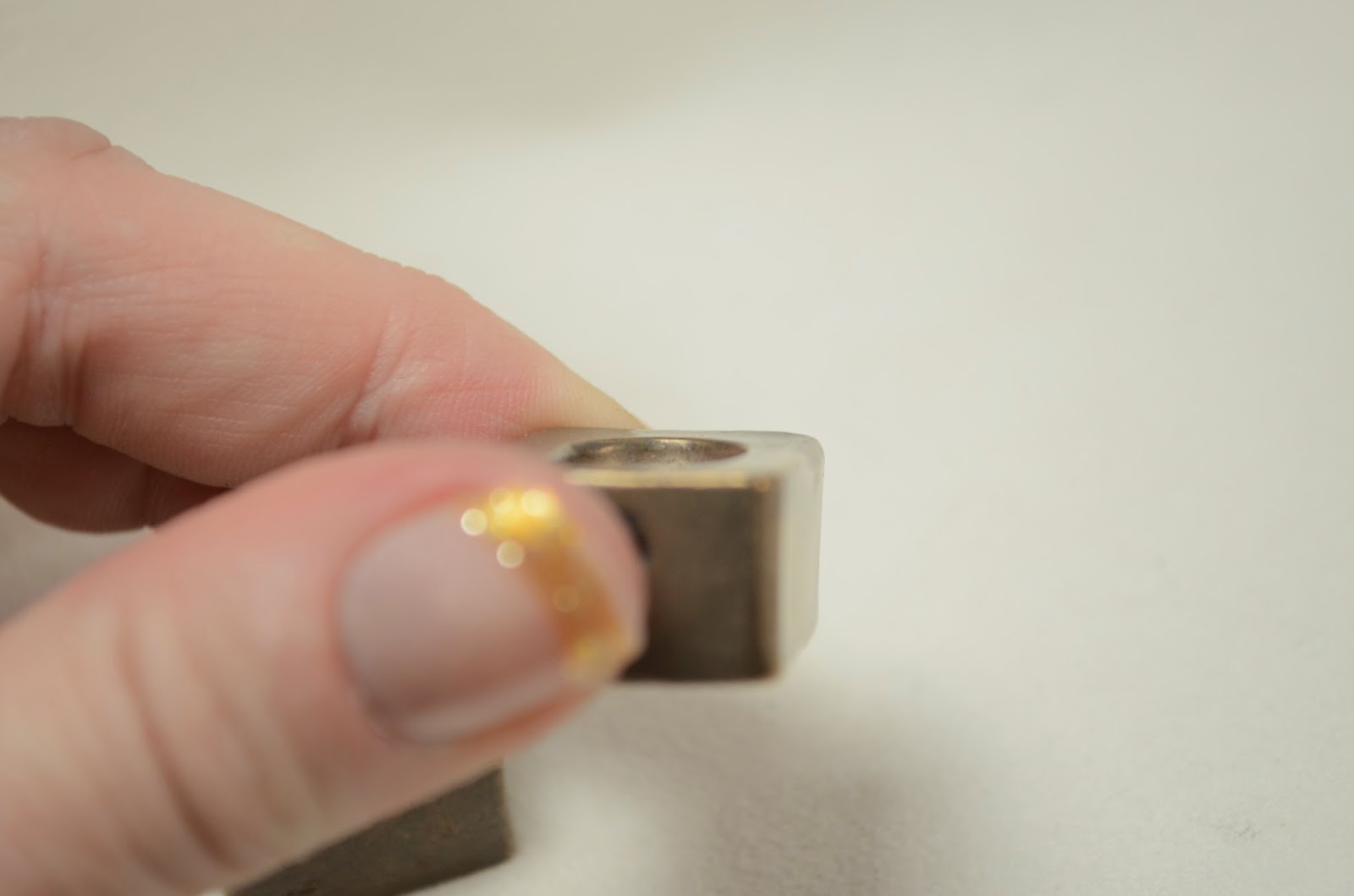 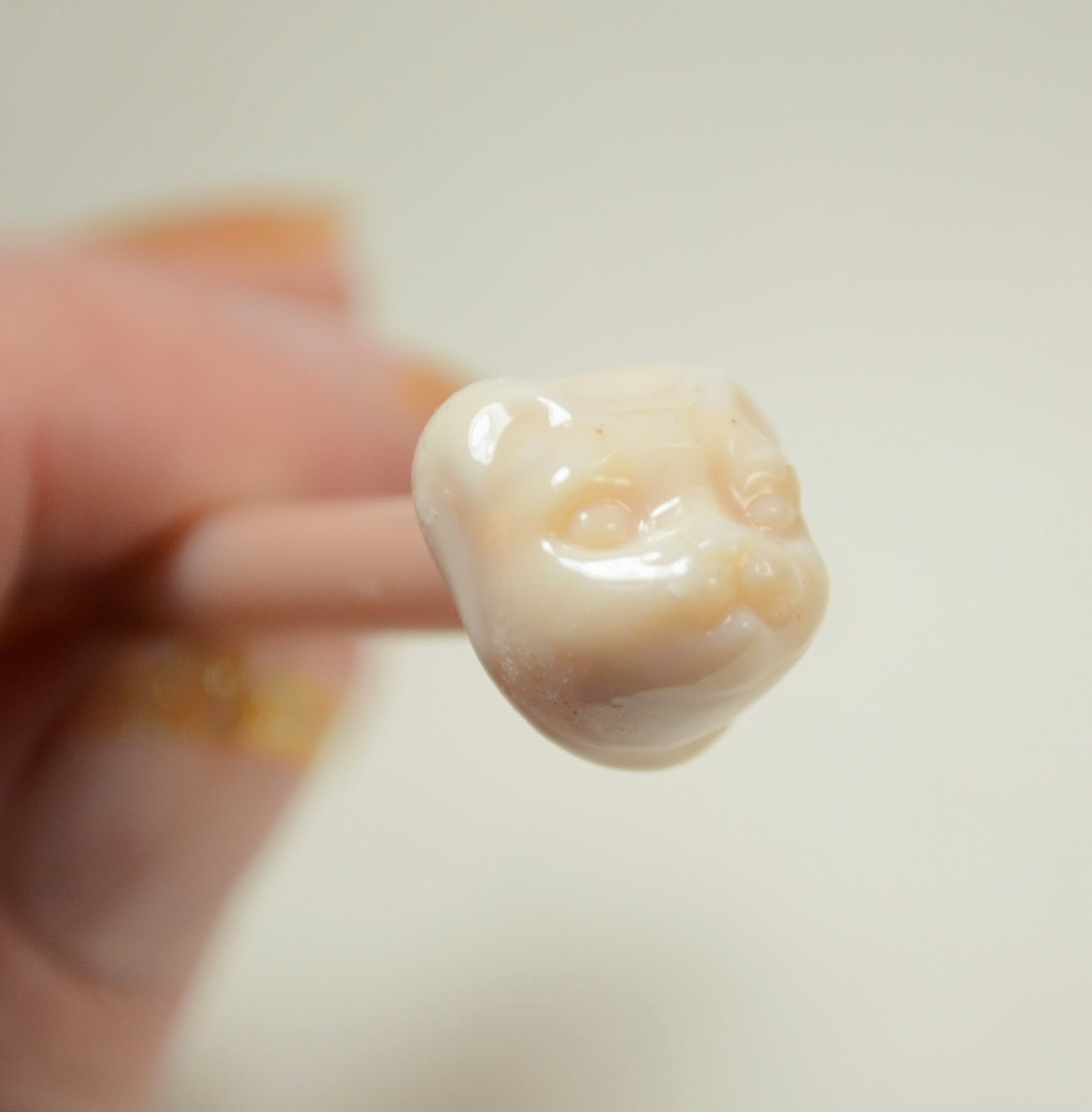 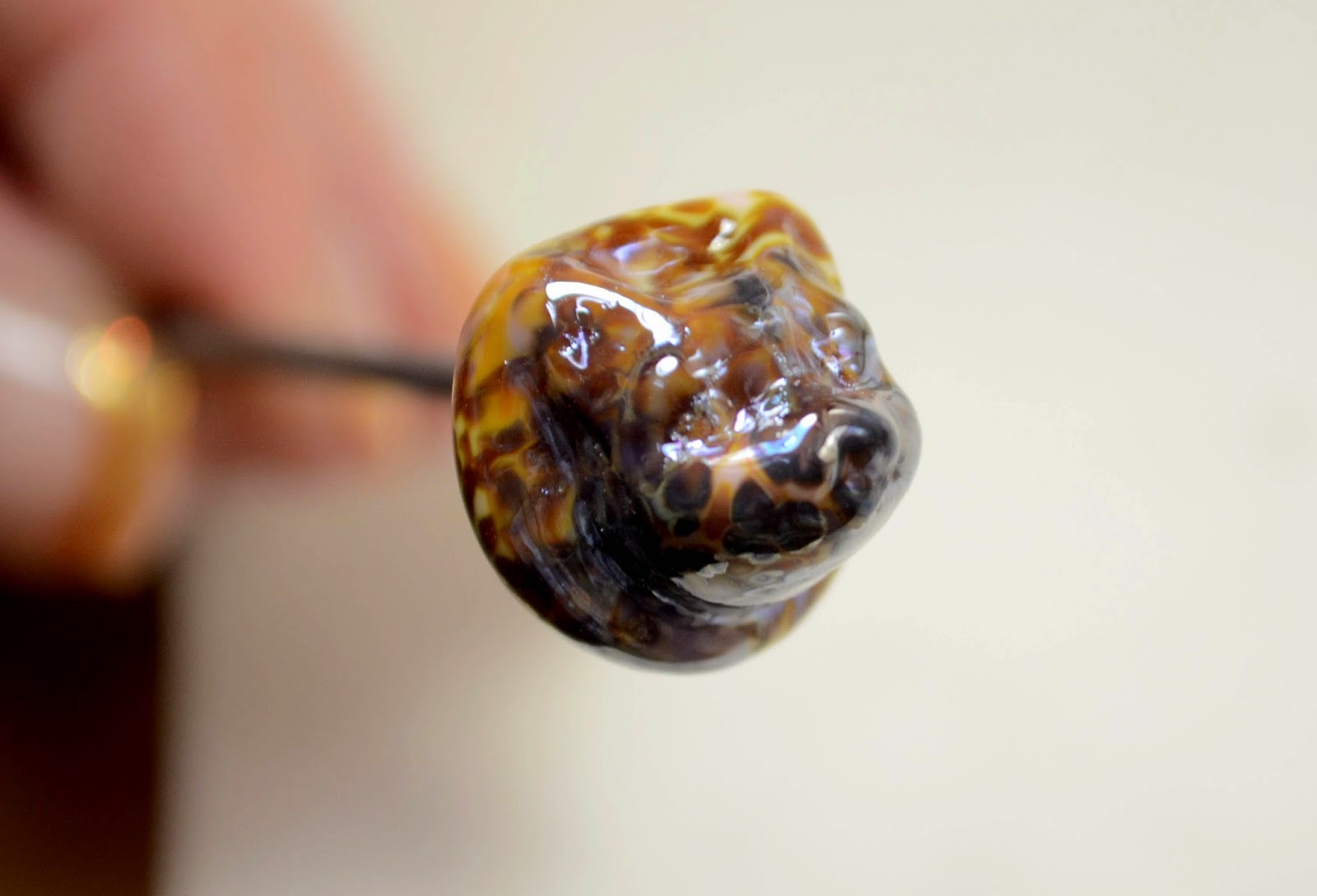 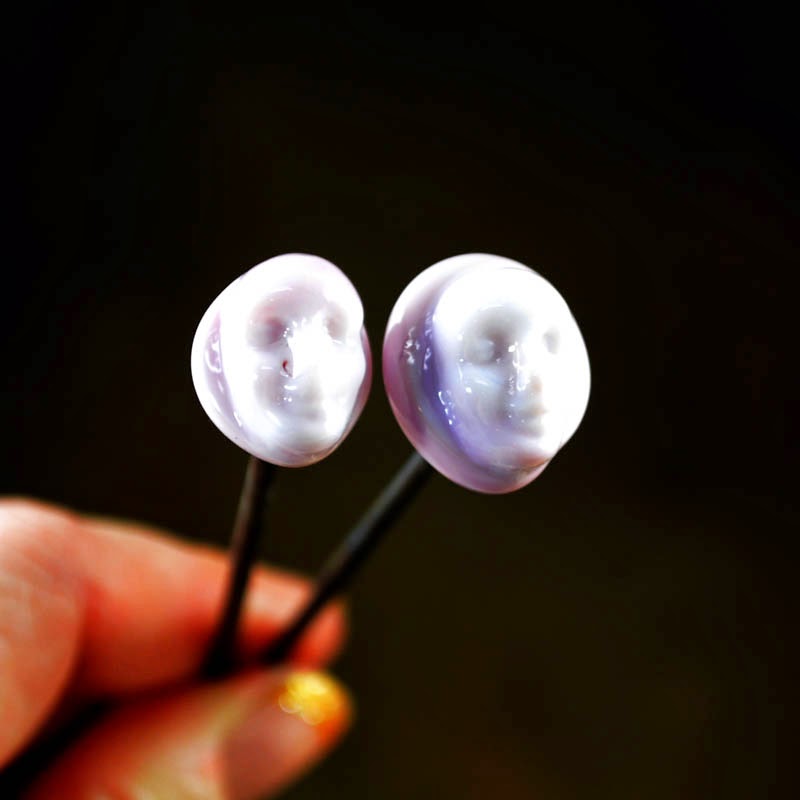 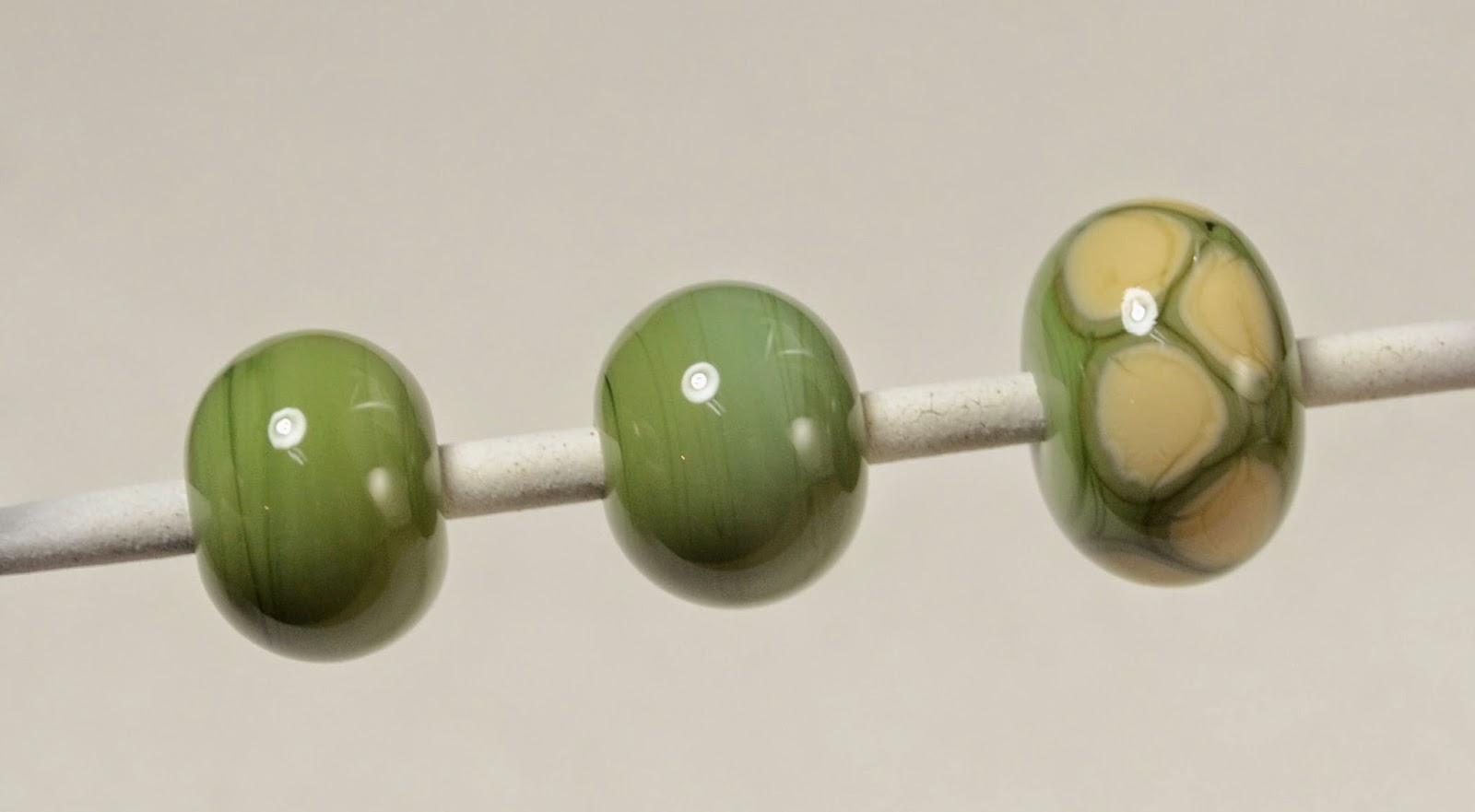 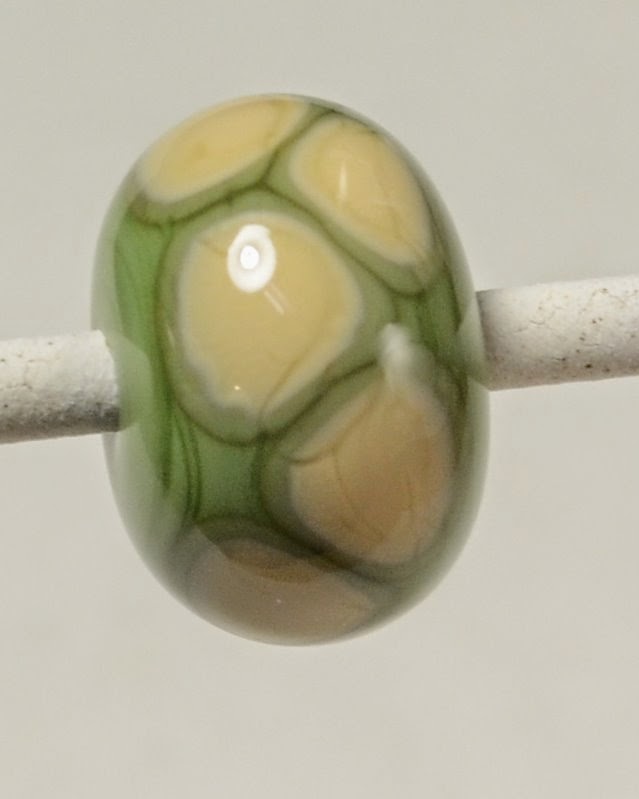 Here is another great red from CiM - Radio Flyer.

From the left - two self coloured beads - which functionally read as opaque, and on the far right, Radio Flyer over clear - which reads as a nice, bright transparent. Talk about having it all.

The third bead from the left is interesting. This is a core of Radio Flyer, with dots in Eff 260 Light Pink, and dots of Radio Flyer on top. I was expecting red dots that really pop - but there is something else going on in there. 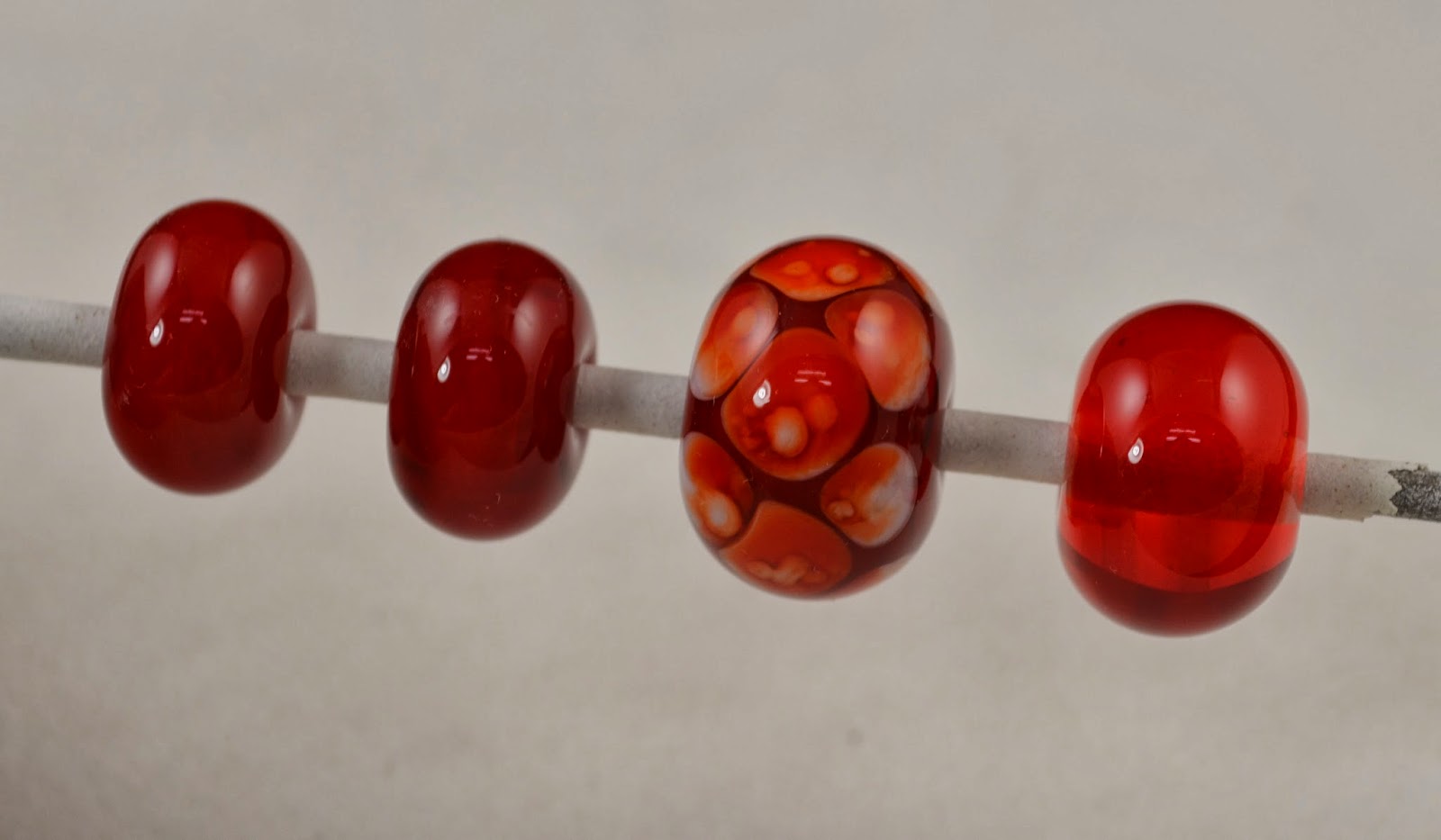 The dots seem to have separated and lifted or something. Here's a close up for more detail. 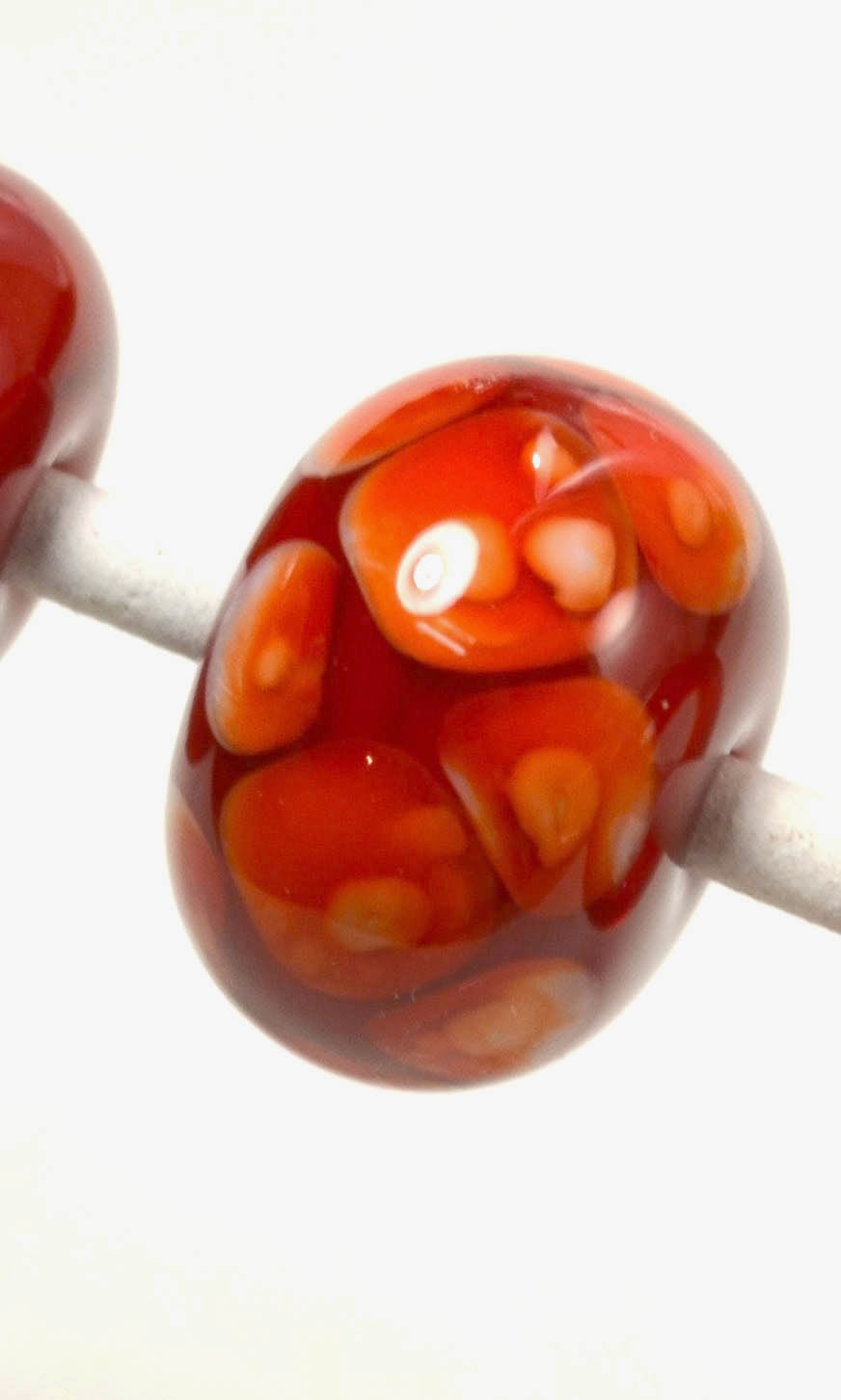 I only did two layers of dots, base, pink, radio flyer on top - but it looks like an extra layer in there - so I really don't know what is going on there.

Now whether that is a property of Radio Flyer, or Eff Light Pink - I do not know. 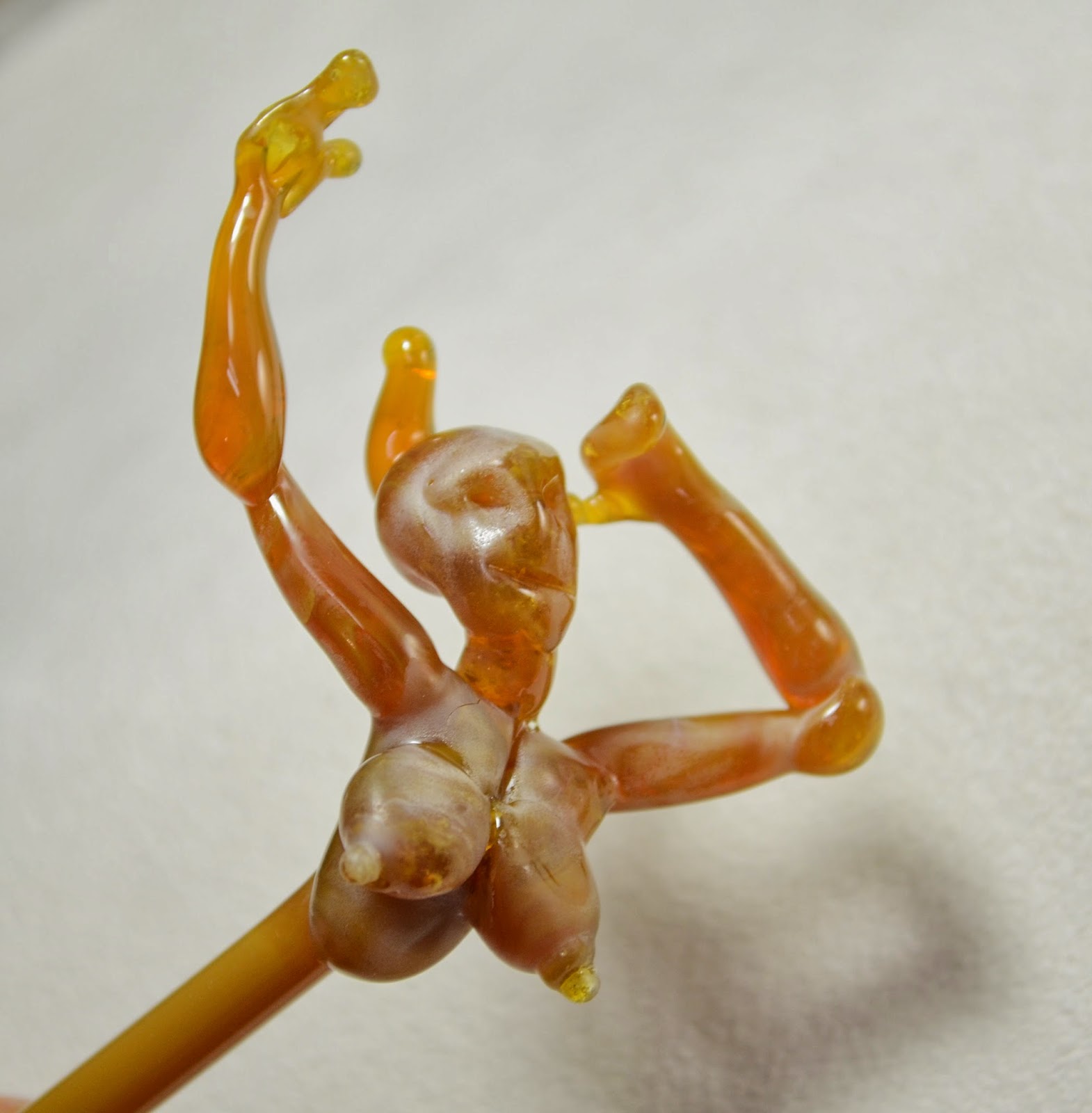 When I first reviewed Honey Swirl, I mentioned that I thought it looked like it was de-vitrifying when I worked it, but couldn't see any evidence of it once it was done.

Apparently  - it will devitrify, (lose the glossy look of glass and develop a chalky, matte look), it's all how you work it. 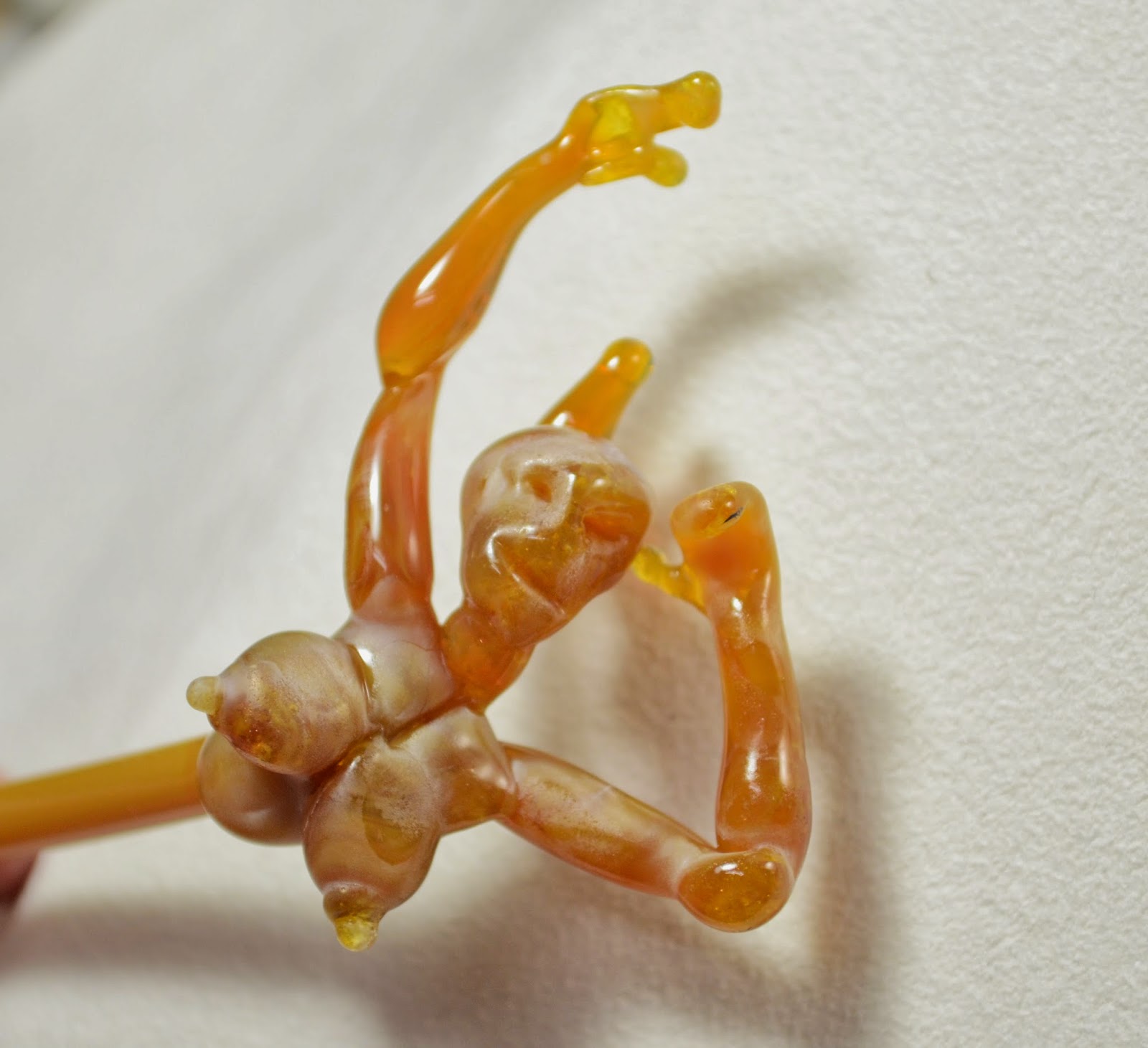 The older, cooler areas are affected. the pieces worked last are not - so you would treat it the same as EDP - if you want it glossy - heat to glowing and let cool, and kiln without re-heating.
Posted by dragonjools at 8:19 a.m. No comments: