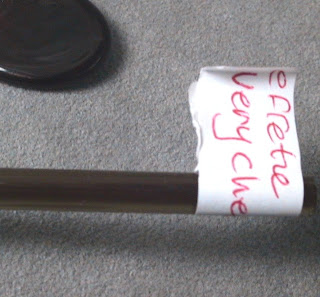 An attempt from Effetre at a transparent, non-livery red? The unworked rods are a translucent, slightly brownish colour - but, by now, I think we've learned that with the transparent reds and oranges - the unworked colour is not much of an indication of the final colour. It does flame strike to a non-brown red - but it is still quite dark and appears to opalize (go cloudy) - making it even darker. 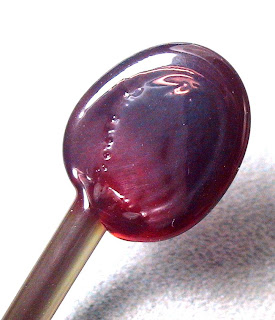 You can see from the paddle - which was kiln annealed - that the paddle at the end is quite red - but the rod looks the same as it does before working (see first photo) - so we can say that it does NOT kiln strike. Useful to know. 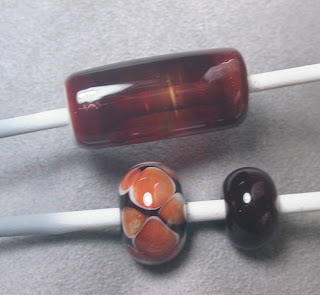 The top bead - the cylinder - is white on the ends, and clear in the centre - as it was obvious that this colour was really dark. It is quite nice over the white - the part over the clear is oddly streaky, however. Opalizing, or just crummy technique in laying down the encasing? Not sure.

The dotted bead - well - it looks orange, rather than red - so I'm going to say that I did not strike it long enough? And the almost black spacer - well - this is a really dark colour.

I think it has promise as a red - but it's really dark - so this is definitely one to work over a light colour - or pull stringer from.
Posted by dragonjools at 4:21 p.m.