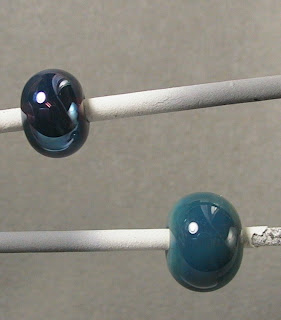 This does look like a deep, transparent purple in the rod, but looky what you get!

The working notes suggest reducing with little to no oxygen in the mix - for a super metallic effect - which I tried for the top left bead - and in deed - very metallic and shiny. In strong backlight - this actually still is a transparent purple!

The working notes also suggest that you can get a thicker, more opaque reduction film if reducing with some oxygen in the mix. For this second bead, I turned down the oxygen, so that I had about 4 inches of yellow in the middle of my flame, and reduced in the tip of the yellow. As you can see (lower right bead) - more blues and greens appeared, and the reduction layer is approaching opaque. However, a strong backlight again reveals a hint of a reddish-purple transparency. Cool! 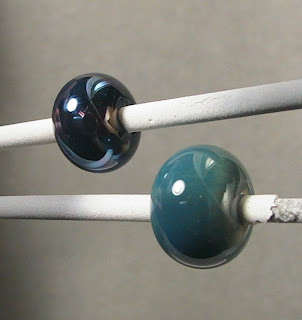 The working notes also say that while it generally reduces to blues and greens, it can also create purples, pinks and even bronze-like tones. As it is very dense - they also suggest it can be used quite thin, i.e. stringers, encasing, etc.

So far - this one was easy to work and did exactly what it said it would. Very promising. I really want to try a nice thin encase over clear and see if I can get more the red-purple transparency effect to show along with the reduction.
Posted by dragonjools at 12:38 a.m.

Email ThisBlogThis!Share to TwitterShare to FacebookShare to Pinterest
Labels: TAG