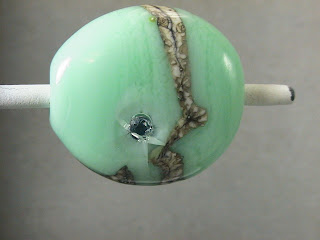 I know you can embed cubic zirconias in lampwork beads - been doing that for years. BTW - a great source for cubic zirconias - www.pehnec.com - there stuff is fabulous and you won't beat the prices. Check out the close outs page - often great deals there. Oh, and yes - these work great in Metal Clay too.

Anyway, I've been using CZs for years - and mostly keeping them small. I was under the impression that you had to encase them to keep them there, but Deb Read changed my mind on that - she told me she doesn't bother and they are fine. So I've been doing both for the last while. 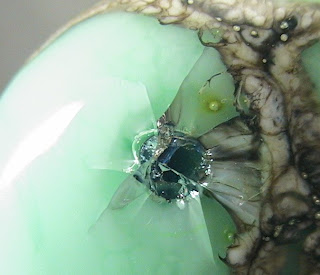 Anyway - I thought I'd try some of these lab-grown sapphires. For the first bead - I made it in nile opalino, added SIS (silvered ivory stringer) and then added the lab sapphire, and then a dot of clear on top. These are 3 mm sapphires.

I added these by leaving the gem, pointed or bottom-side (culet) side up, on my graphite marver, and pressing the hot bead down onto it. Unlike CZ's - no matter how hot or how long I held this - they did NOT want to stick in place. So I would up picking them up with tweezers and dropping them into the crater than the pressing process had created. At least they made very nice holes for themselves.

I dabbed some clear on top. You can see - the clear has cracked all to heck. I'm guessing - encasing is not making them happy.

In retrospect - using an opalino was probably not the best bet for this first test. Doh! 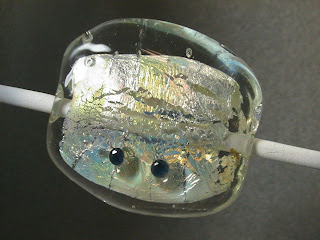 Embolden by the success of the first bead - well - I thought it was a success - the sapphire hadn't melted or blown up - I tried again. I had the - in retrospect - quaint idea that silver foil behind the sapphires would make them more luminous - they are a little darkish.

The bead is a core of CiM clear - silver foil, and encased in CiM clear. I'm rather intriqued by the hits of blue that developed. Gold - I pretty much always get - but there are some shimmers of blue, that show red at an angle. These are quite divine. 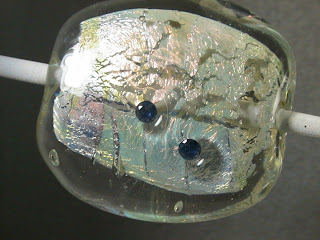 Again - pressing the glass down on the sapphires - the sapphires did not want to stick - only one stuck of it's own accord - the rest I had to place with tweezers.

I did push them down quite deeply into the glass - I wanted to push them in at least as deep as the girdle (the wide part of the stone.)

They seem to be quite secure - and so far, no cracks. I'll hang onto this bead for a while - just to make sure they don't develop later.

So far, I'm pleased with the results! I think another encasing experiment in a more normal colour than green opalino is in order, however. 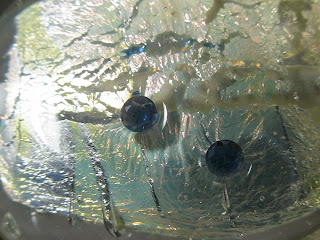 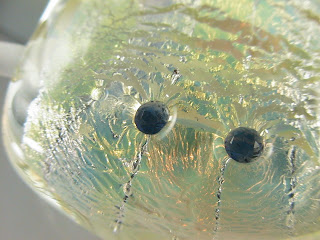 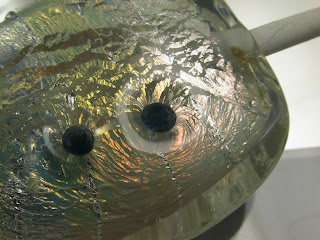