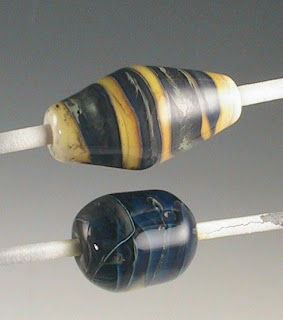 When the silver saturated colours first came out - I tried the Kandinsky Green - and frankly - it baffled the heck out of me.

Recently, I got a chance to sit down with someone who has some experience with some of the high-metal content glasses - and picked their brains on this one.

My issue with the glass has been that it boils when you heat it. Now, I know that you need to go for a cooler flame and/or less oxygenated flame in these cases - it never occurred to me that it needed to be this low.

By the time we found a flame that the glass would just melt happily in, we were just a heart-beat away from the yellow flame spouting up in the middle of the flame - we'd turned down the oxygen that much! (This was a tanked oxygen/boosted natural gas on a Mega Minor set up.) The flame was wide and bushy, but at least the glass wasn't boiling! 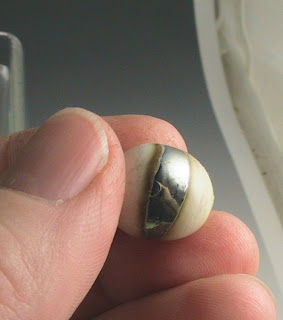 Further experimenting with cooling, heating, and adjusting the flame, and we discovered we could take it from a variety of greens to metallics - including this bead in the second photo, which shows a very shiny band of the Kad. Green on ivory. So shiny - it's actually reflecting the camera. ;-)

The first photo is my attempts to reproduce this effect - not successfully - but at least I got some interesting colours and not craters, which is what I was getting before. (You can see the bicone has fumed from the silver in the Kad. Grn glass. )

So, the key with this one is to use way less oxygen than you would think. Once we had it on the bead and had worked it awhile - we could turn the oxygen back up to more normal levels.

At least I have some better ideas now of what to try with this glass.
Posted by dragonjools at 6:26 p.m.