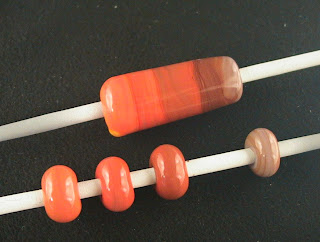 Here comes a new batch of Effetre Corals - the foreman at the factory must just groan when he (she?) sees "Coral" come up on the mixing schedule. Something about 420 must make it particularly hard to reproduce - and in the spirit of that - here we have 4 new shades. Remember - these don't seem to be particularly re-producible - so if you find one you like - I suggest you buy a lot of it and hoard it. ;-) (For instance - I still have a couple of pounds of River Rock - and no - it's NOT for sale.) :-P

From left to right, as individual beads and combined in one long bead - we have: 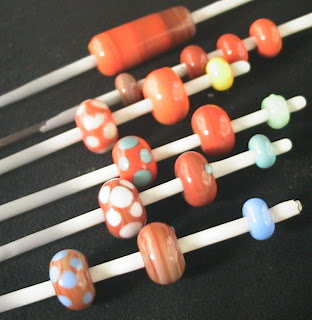 Coral Sunburst Special: a rather carroty orange, a nice orange orange - which cools to be very close to the original rod colour. (Yellow marker bead - third mandrel from the rear))

Coral Lobster Special: (420-L) A redder orange - but still comfortably in the orange family of colours - it is also quite true to the rod colour after annealing. (Green marker bead - third mandrel from the front)

Coral La Mesa Special (420-LM) Still darker - and looking more like dull red in the rod, and slightly browner after working and annealing. The rod was a little shocky - but no where near on the order of the Spanish Leather (see yesterday's post). (Turquoise marker bead - second mandrel from the front)

Coral Martian Strata Special (420-MS) A red-brown colour - like a dark brick - this colour is quite streaky and shows cafe-au-lait streaks on a brownish background after working and annealing. Quite an appropriate name, actually. (Blue marker bead - front mandrel.) 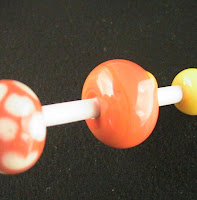 Again - Sunburst - a nice bright orange. The bead on the far left is dotted with Ivory - which has bled like crazy. 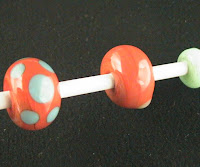 Lobster - and the bead on the left is dotted with turquoise - which has reacted with the turquoise for a nice, crisp grey line. 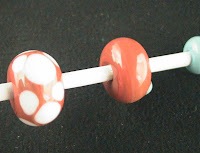 La Mesa - and the bead on the left is dotted with white - which had retained it's edges considerable better than the ivory dots! 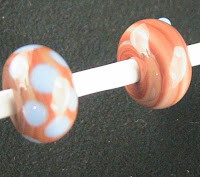 And the very streaky Martian Strata, with a nice periwinkle dotted bead on the left.

A nice happy set of oranges - the 4th is perhaps a little more interesting - with it's extreme streakiness. The four together as rods look like a nice range of colours - but after working - the Martian Strata looks a little like an outsider.
Posted by dragonjools at 8:47 p.m.