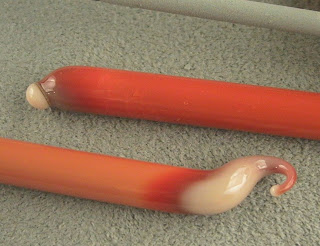 First, CiM brings us Adamantium, now we have CiM Phoenix. Could it be there is a big X-Men fan at CiM? ;-)

Boy, was I surprised by this glass. This is a striking, opaque orange, with as wide a range as Jean Grey, a.k.a. Phoenix, and later, Dark Phoenix, herself.

Phoenix, is, of course, also the mythical bird that arises anew from the ashes of it's own funeral pyre. 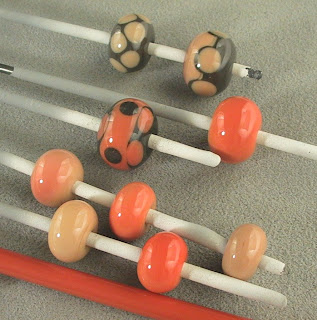 The unworked rods themselves vary in intensity of color - but all seem to work up the same.

When hot - the glass looks white to grey, and cools to a light colour. If you put it in the kiln at that point, it will come out of the kiln a light peach colour.

However, re-introducing it into the flame (striking) will produce a blush of colour that gets darker the more times you reheat it.

See the bottom mandrel in the photo on the right - the right hand bead was struck, while the left hand bead went into the kiln without re-heating. 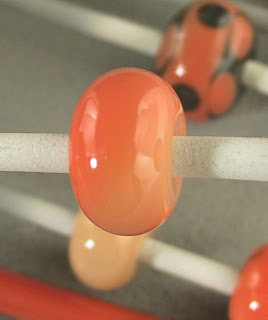 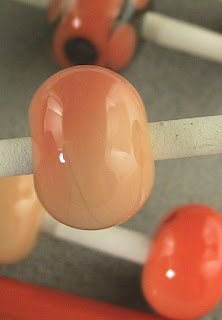 These two beads were partially struck, you can see the color has bloomed on one side - like a partially ripened fruit!

The strike is very easy to control - it might be fun to make some peach beads with one side riper! Or sunset beads - with the sunset deepening from pale to dark orange. Or maybe a phoenix bird - shading from dark to light? 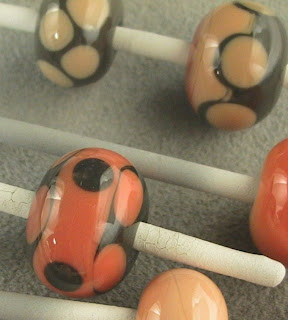 And finally - we have CiM Adamantium in combination with CiM Phoenix. You can see that the Adamantium looks more brown than grey here. In fact, you could argue for some time as to whether it is grey or brown. Notice that the Phoenix has ranged from a pale flesh color to a deep orange, depending on how long it is struck.

Wolverine and Phoenix, Logan and Jean, together at last. ;-) 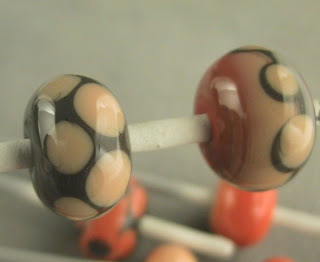