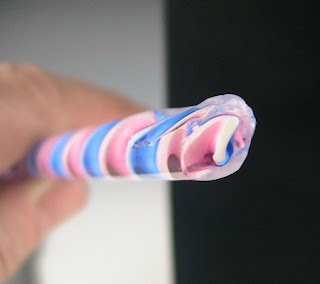 Wow - just look at that! Is that not gorgeous?

Almost too nice to use! But, I feel that way about some of the twisties I make too. ;-)

My second thought was - right after "Wow" - was "Geez - that's so big and thick - That is going to blow up when I put it back into the flame."

Like the thick rods of clear for encasing - that lose a half an inch every time you start a new gather - I figured this was going shock into frit and leave very little to work with (of course, I only had a little bit to try). 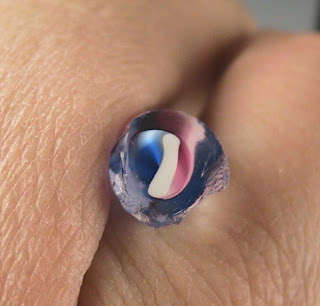 So - imagine my joy that it did NOT shock! You can see from the end shot that there is a significant layer of clear around it. It worked just fine - no issues! 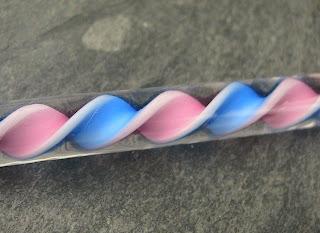 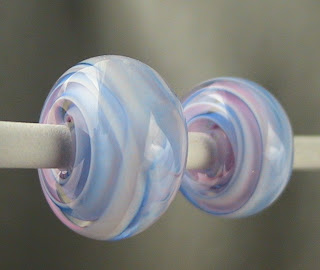 I started by winding off two very attractive spacers on a 1/8 mandrel. Very pretty, but don't really capture the ribbony essence of the twistie. 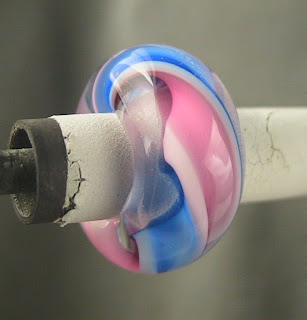 So - to keep the twistie looking like a twistie - I wound off a single wrap on a big hole mandrel. (10 mm)

While I did not do an amazing job of the join (which I haven't shown here) - I also did not "tighten" the twistie as I laid it down. (Usually, twisties sort of relax and become less defined as you use them, so the usual practice is to roll them in your fingers as you lay them down to keep the twist looking tight. The key is to twist in the direction that makes the pattern tighter, not in the direction that untwists it and turns it into two or more wavy lines.) 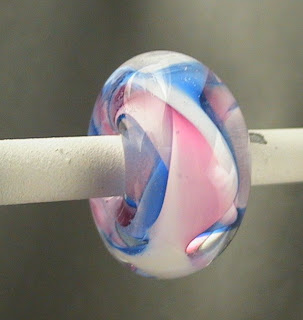 This is another on a 6 mm mandrel - a double wrap. Also quite effective! 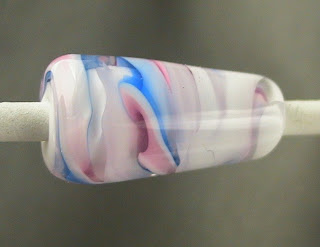 And finally - this cone was the end of the rod - a scrappy little broken piece, laid down over a core of white. Still pretty cool.

I'm pretty excited about this - it was fun to work with - more fun than I expected because I really thought that it was going to shock like heck - and even when the twistie is just giving you streaky colours - it's still pretty cool.

I can hardly wait to see what colours they are going to make, if they will be making more elaborate twists, etc. I hope they do make some smaller ones, I would like to see twisties that could be used directly on beads without overwhelming them. However - even at this size - it is still quite useable. I'm excite to get my hands on more of it. If nothing else - you can make very nice streaky spacers.
Posted by dragonjools at 11:42 a.m.