Belladonna Black Diamond is designed to be a true black that can be stretched thin and retain it's blackness with no shades of purple or blue, but without the webbing, crawling effect that some blacks have when superheated.

And does it live up to this lofty goal? By crikey - it does!

A word of explanation here for those new to working glass. Glass can be opaque (you can't see through it) or transparent - transmits light - not necessarily clear, and sometimes, so dark you can't see through it at all except with a really strong light behind it - but it's still a "transparent." That distinction is important to you as you develop your glass working skills - as opaques are softer, they melt faster, stay moving longer, melt at lower temperatures - while transparents are stiffer, need more heat to melt, and stiffen faster. Transparent dots on an opaque bead tend to "sink" into the opaque base when melted in. The difference becomes especially important if you get into making sculptural beads, as some things are much easier to do with a stiff transparent than a soft opaque, and vice versa.

Black is a transparent - and traditionally - i.e. Effetre - it was a really, really, really dark purple. And you could see that it was purple if you melted the glass and let it flow, or did small dots and melted them in a lot. So then there was Intense Black - which has a lot more of the stuff that makes it black, making it significantly more expensive. It stays black, but it also does all sorts of interesting things when super heated. So, there's a trade-off. Anyway - I'll revisit black on another day.

This is a white bead with black dots. No traces of colour at the edge. 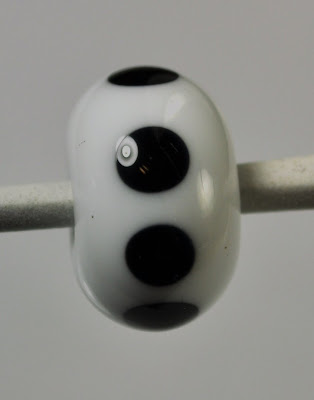 Meh, you say. Big deal. Oh yeah? Check this out. 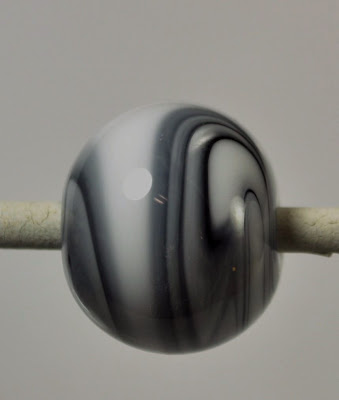 How's that grab you? White bead - 3 horizontal lines - heat the snot out of it, keep rolling it and keep it balanced, letting the black stretch and swirl around. See where the black has gone really thin. It's - well - black + white gives you ... grey. 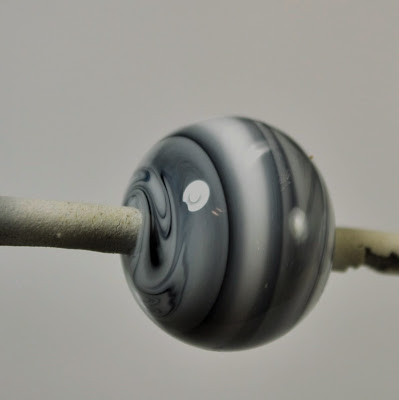 And another shot of the same bead. It's black, it's white, it's grey. When making this bead - I had the sense of discovering something new, of being on uncharted ground. You just don't usually see this happen. 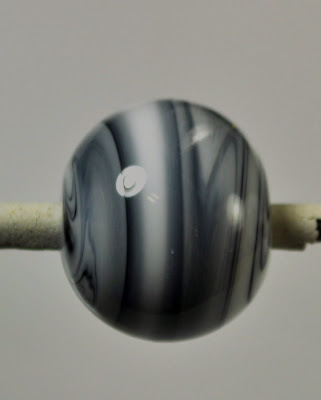 For comparison - this is Effetre Black on white, worked the same way. Notice the streaks of purple. 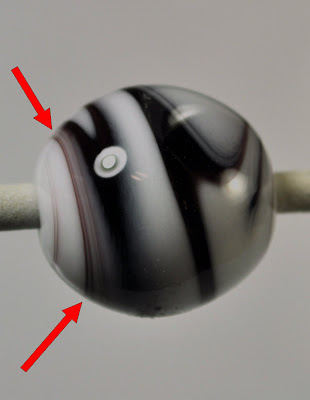 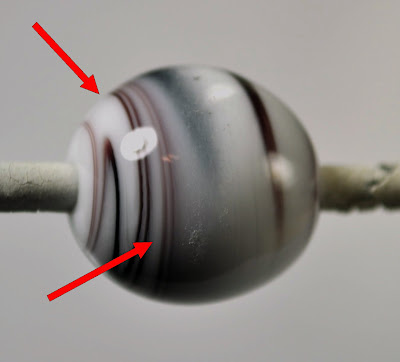 So - how about on Ivory? This is a base of Effetre Dark Ivory on the left, worked as above - and then more ivory added on the right, and Black Diamond "blobbed" on top and melted in. This side also got a lot of heat. No trace of the webbing and crawling and break up that Intense Black will do in these same conditions - especially on ivory. 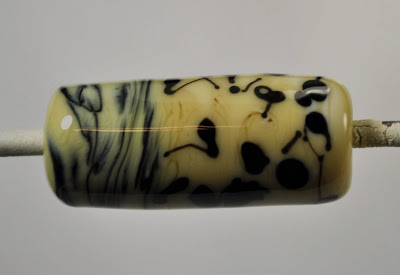 How does it compare for stiffness? Well - it comes as stringers, so it's really hard to say.

This may seem like a really simple thing, especially if you are new to glass and are still struggling to get the beads round, but a true black that just behaves itself is a really significant thing.

Not to say that I don't LOVE the bizarre effects that Intense Black can give you - because I do. And I have had a lot of success with Vetro Black and CiM Tuxedo - both of them stay reasonably true (Well - sometimes the Vetro goes more of a blue grey.) The CiM Hades is great - but behaves more like the Intense Black.

That this ships as a stringer is interesting - it is designed to be worked thin, and to be not-reactive. So it fills a need in between regular black and intense black. And opens some new design possibilities.

Anyway - I think that Belladonna Black Diamond (Belladonna is the new line of Boutique Glass from Arrow Springs) is a game changer - a significant new addition to the glass working palette. Pretty strong recommendation - but I'm pretty impressed with it. It will be exciting to see what new things come of it.

Email ThisBlogThis!Share to TwitterShare to FacebookShare to Pinterest
Labels: belladonna