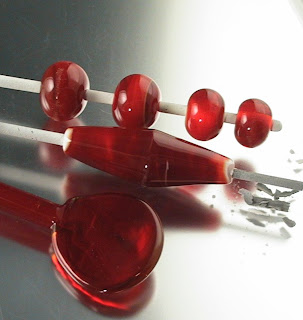 I thought for SURE I had overworked the larger bead at the back left - it looked livery and with a brownish overcast when I put it in the kiln - but apparently not.

This is a very handsome red - the spacers are, from left to right
The bicone is a white core, a layer of clear, a thin layer of sangre.

This is a very dark red, shows as opaque if used thick, but can be transparent if diluted enough, i.e. over clear. A really nice red. An excellent addition to the COE 104 palette.
Posted by dragonjools at 10:49 a.m.