CiM has released a quartet of new reds - Maraschino, Valentine, Crimson, and Ruby Slippers. There's Auburn too - but CiM has put that with the Browns (700 series).(I'll be review the other 3 shortly.)

Of these new reds - Maraschino is the big winner. Maraschino is a bright, happy transparent red, with a tendency to opacify as it is worked (common in transparent reds) and no sign of "liveriness" - or browning as it is worked. Worked thin, it shows a slight orangey-ness. I prefer my reds a little on the blue side - (think raspberries vs strawberries) but I'll take a slightly orange red over a liver-red any day.

Here we have - two self coloured spacers. Notice the first one made (on the right), is almost opaque at the core, looking like a red encased over red. (More reheating - as it is kept warm while making the next beads). The one on the left had developed clouds too - not as much yet. 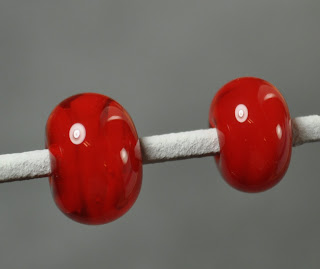 This is a clear core, and an encasing of Maraschino. Even so, some clouds have appeared. 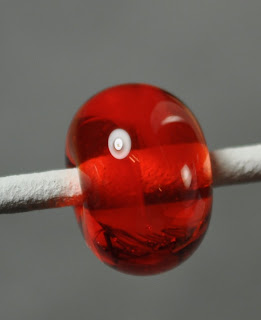 Dots on white. Where it has thinned at the edge - you can definitely see the orangey-ness of this. 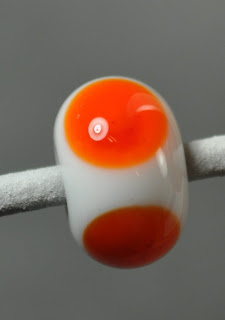 And here it is in a feather - with some clear. Mostly, it has opacified, but is still a brilliant and beautiful red. 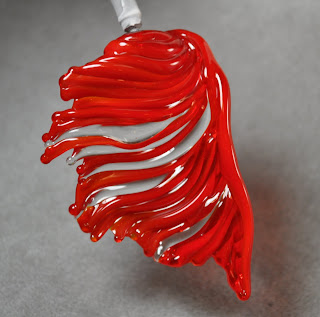 Maraschino for the Win!
Posted by dragonjools at 10:39 a.m.