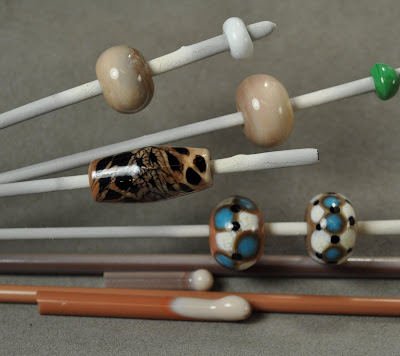 Effetre Striking Powder Pink. Not what you usually think of when you think pink.

More of a flesh tone, really - within the rather limited palette of Caucasian of Northern European Descent and/or British Isles. ;-) With perhaps a bit of bruising.

I have two batches here. 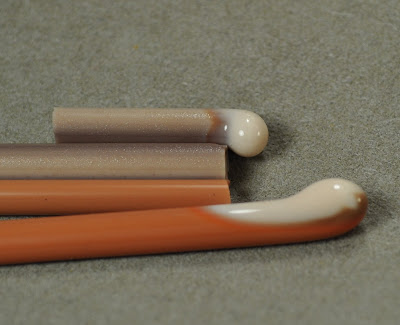 The new rods are rougher in texture - you can see the texture in the picture, and significantly shockier.

When it is molten clear-hot - you can see that it is full of bubbles. If is was transparent - it would be ghastly.

You can also see little dots of something - like whatever they used as a colourant was a little bit large and did not get mixed in well.

The older batch is the dark, peachier rods on the bottom.

But - is the end result the same? 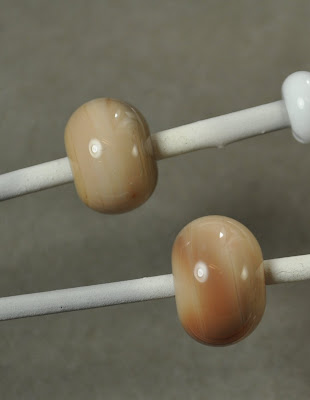 The colour is richer in the old batch. 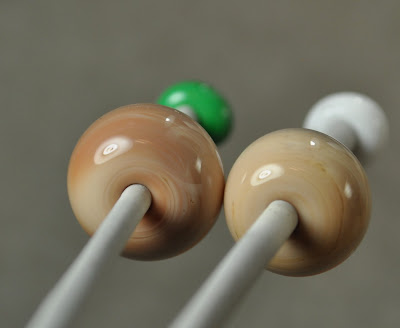 Another view of the same two beads - the one with the little green marker is the old batch.

But it is hard to say that they got the same amount of heat.

This bead is half and half - the old batch on the left and the new batch on the right. At this point - it became obvious the new batch was harder to work - as it kept shocking and popping the end inch off the rod as I tried to make a gather. 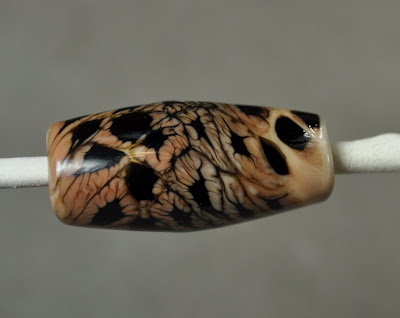 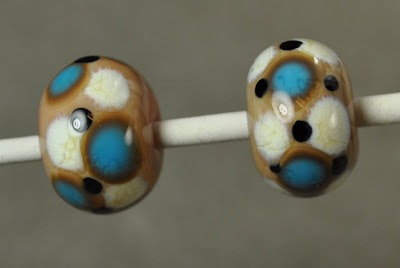 This is the old batch on the left, and the new batch on the right. The dots are Ivory and Lauscha Turquoise, with Hades black dots. The Ivory has bled, the turquoise has reacted.

When worked like this - I don't see a big difference in the base colour - so it may be that colour wise - it might take a little longer, but you can probably get the same color from the new batch as the old batch.

But given that the new batch is shocky and scummy - even if you can see it - it feels like a swing and a miss in the quality control department.

Once again, it feels like the Italian manufacturer is passing off seconds on the North American market. (But I could be wrong - they may be selling second rate product to everyone.)