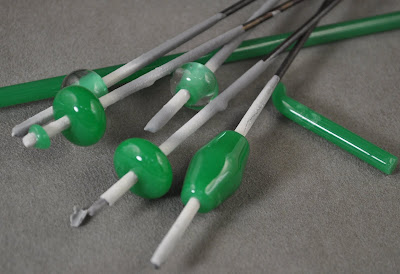 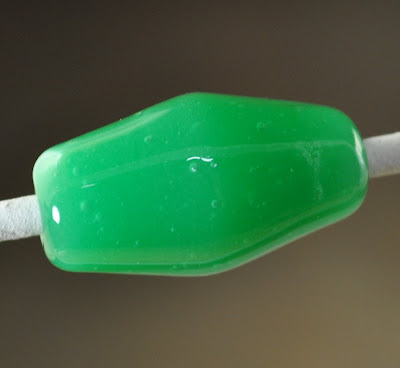 Ah yes - the Effetre Alabastros. The glass everyone loves to fear. This is Effetre 340 Green Alabastro.

Beginners are attracted to the translucency of these glasses - not quite opaque - sort of like stone like quartz or fine jade. They may even pluck up the courage to spend the extra to buy them - and then some more experienced lampworker says "they're not really compatible, you know." And so - terrified to use them, they put them aside and those poor alabastros sit in a corner, getting dusty.

Which is a shame!

I personally love these, and the opalinos as well - because of their resemblance to gemmy stones.

First off - they tend to boil - so - if you see a lot of bubbles forming - cool down and use less heat. I remembered after making this bicone - you can see the bubbles in it. 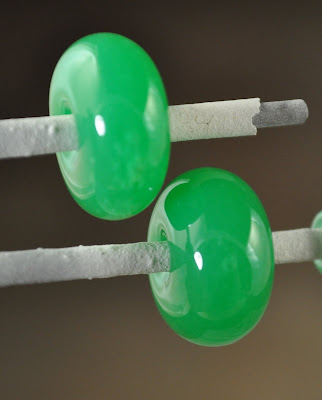 The left-most spacer was made with too much heat still - the one on the right - much less - and while it has a few bubbles - there are fewer. Any less heat, however, and I would have lost interest - so for me, this was a good compromise between a few bubbles and nodding off at the torch.

But all of these are just a single colour, so - what about compatibility? I mean - I tend to use they by themselves, as I like to use them so that they resemble carved stone - but that's not everyone's schtick. So- let's try encasing them.

So - if I think I am pushing the borders of compatibility - I try to reduce the amount of one glass so that the percentage of the total in the bead is low. Say, I wanted to encase an opaque red (why would be the question, as it then looks lighter, but ... ) I would make a base in clear, encase it with the opaque red, and then encase in clear. 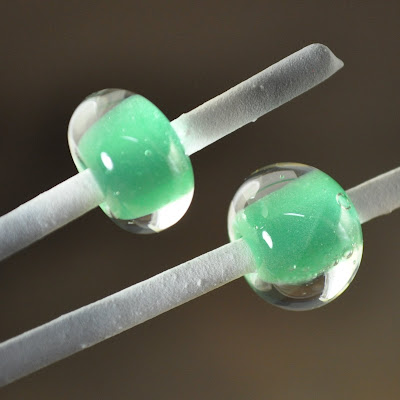 The other thing I would do is make sure that it is a nice long, slow anneal.

So - here we have two spacers, Green Alabastro - encased. Now, admittedly - the cores of these are fairly small - but I did not actually make a clear core and a thin layer of green, I just made a clear bead and encased in clear (Lauscha clear)

We are about a week later, and they are still intact.

That faint line you see in the right bead is a fold from getting the core too hot while encasing. I've looked at it every which way under magnification - it is not a crack.

I'll hang onto these two and keep you posted as to their durability.

Oh, and you notice they look lighter when encased too.
Posted by dragonjools at 10:42 p.m.