A friend - knowing my interest in cored and lined beads - brought me back some fine silver cores and associated findings from Bead and Button. Imagine my surprise to learn that the point was to make the bead ON the core - hot - not to add it to the bead after! 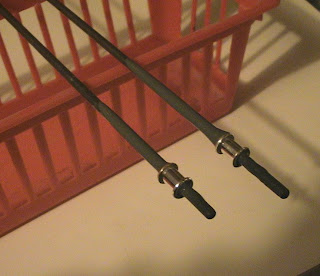 So I dipped some mandrels and jammed the cores onto the wet bead release - this worked surprisingly well. I made sure that the bead release didn't get splashed up over the end onto the core (on the one that did - I wiped it away while it was wet) - but I wasn't too worried about it on the ends. I dried them flat - wasn't sure that they wouldn't slide if I stood them upright.

I was really worried about melting the fine silver - after all - look at what happens to fine silver foil when you hit it with the flame. Poof! Melted into the surface of the bead.

So I did step down the heat by switching to my top-fire mega-minor (mounted on the top of my midrange) - so as to work cooler. I also let the bead release dry overnight - rather than attempting to flame dry that big cone of bead release that backs up behind the core when you push it on. 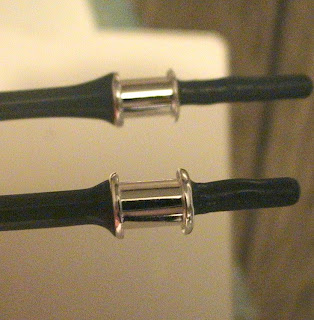 BTW - I jammed them on 1/8 inch mandrels - that seemed to be the best fit for size - the next size up that I have was too big.

I googled the melting point of fine silver, and found this rather elegant table, and that silver melts at 1761 degrees F - so actually above the point at which we work the glass. This came as a surprise, but hey - now I know.

My biggest fear was that it would be hard to get them to flow and round out - without melting the silver core. 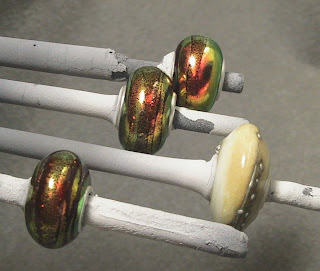 I warmed the bead release and the core a little - and went to lay down some glass. I discovered that I hadn't warmed it enough - as the glass did not want to stick to the metal - so I just kept warming it a little more until it did stick.

The first one went down a little wonky - I tried really hard to push the glass into the angle between the flare wall and the tube - and didn't get it entirely there. So after laying down the first couple of wraps - I gave it a little more heat and marvered it to push the glass out to the flare. This worked, and I then added another wrap to make it a rounder shape again.

I then realized that even if I didn't get it smack up on the end - it's not like it's going to fall off, and I was apparently not melting the silver - so perhaps this was going to work after all.

So I got more confident with each one - in the photo of the 4 mandrels together, they are, from the top, Numbers 3, 2, 4, and first in the sequence that I made them. You can see by the fourth, I was getting a little more adventurous - I thought I'd try some ivory - wrapped some silver wire on to it, and then melted it in, and marvered it to shape. 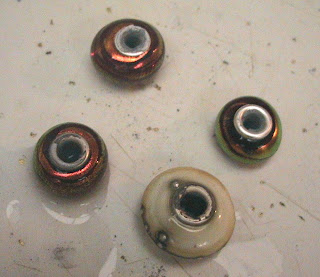 When I pulled them off the mandrel the next day - there was bead release, of course, in the hole - which I realized I did not want to take the bead reamer/dremel combo to - as I didn't want to scratch the heck out of the silver - so I used a stiff brush. Note to self - some sort of round, stiff brush would be ideal here. 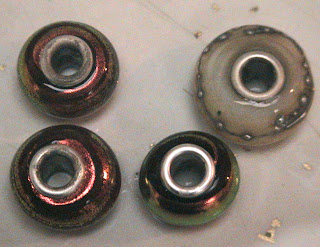 In examining them, it became clear that I had gotten the silver quite hot in some places, as the metal surface texture was no longer as smooth and the profile of the flare had changed a little. See top left vs bottom right for the clearest illustration of that.

However, they still looked fairly decent - although in this brutally honest picture - you can see that they are not perfectly round. Ah well, c'est la bead.

pull off mandrel - bead release - didn't want to grind - used brush and scraper. Didn't tumble, but probably can. Instead - used foredom and polishing point to polish. Hang on earring finding and voila - done. Matched pairs easily - as the width is controlled. 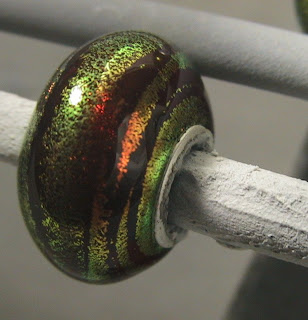 Here's no 2 again, still on the mandrel.

Very nice. Must try this with a light, transparent dichro! 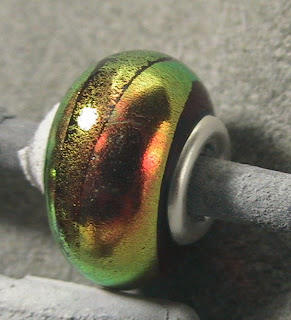 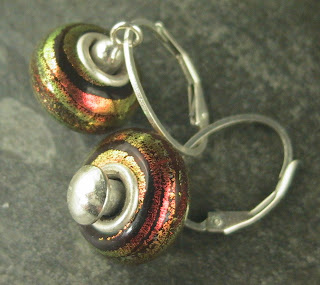 And here are the finished earrings, hanging on the fat little flared posts of the interchangeable earrings.

I did hit them with a polishing point on the Foredom to bring back the shine that I cooked off - and I probably could have worked a little harder at that - but I just used the rubber cone with the impregnated polish to buff them up.

Earrings are a logical choice to make with these, as you are making beads that pretty much have to come out similar in size - due to controling the width. (Which - is a hint for those of you trying to make similarly-sized beads. Use a Sharpie(tm) to mark your dried bead release into regular lengths before you start - to get consistently-sized beads. Yes - a Sharpie brand permanent marker will draw on bead release - and stay visible after heating long enough to be useful. No idea what they make the ink with, but it's amazing stuff.)

These cores and findings are available from Metal Clay Findings now, and I'll go and nag someone in Canada into carrying them too, so I can get a steady supply of them! 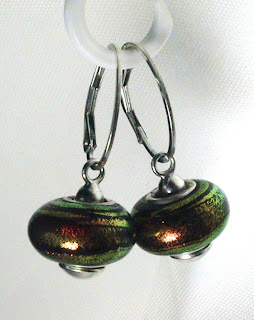 Of course - this all taps into the whole Pandora/Troll/Biagi/etc. mania that I keep seeing - with boutiques selling single spacer size beads for $35 - $85 and Chinese manufactures selling them for $20/kilo.

There are "threaded" cores available too - the Pandora bracelets have threaded ends so that if you drop it - all the beads don't fall off and scatter.

So I believe these are sized to fit that style of jewelry. Next time I see one, I'll double check.

Anyway - I was completely, and delightfully surprised that this worked. Work it cool - and you'll be fine! I'm sold!
Posted by dragonjools at 8:33 a.m.