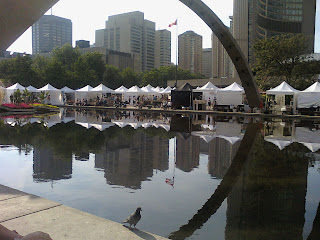 Several weeks ago - I went to the Toronto Outdoor Art Exhibit (TOAE - which everyone pronounces toe-ee) - where I took this rather idyllic photograph. While several notable vendors (in the glass bead and jewelry world, anyway!) were conspicuous in their absence - by and large - the vendors I talked to were having a good show.

I went with a friend, and because it was an outdoor show, I took one of the dogs with me - Adam, aka The Dude - as I realized that I hadn't really done a lot of socializing with him in large crowds and the big city environment. This was a good opportunity, as I wasn't expecting any excitement, and I could easily bail if anything went wrong.

My friend and I had done most of the show, and The Dude had been absolutely awesome - a perfect diplomat and gentleman. Quiet, attentive, not overly boisterous, saying hi to those who wanted to, leaving others alone - a splendid example of correct behaviour in public. We had stopped in the booth of a glass blower and were having a nice little chat about the world of glass - the dog was lying in the middle of the booth, being very calm. Someone came into the booth and was looking at the vases on display - and knocked one over - and I saw the domino effect in action.

The next vase tipped over, and it hit the next - which was at the edge of the table. A two-foot-high hand-made blown-glass vase pinwheeled off the table into empty space, spinning in the sun. I swear, I saw it in slow motion. It hung in the air, glittering, and then time speeded back up, and it dropped, landing inches from the dog, as he quietly lay in the middle of the booth, surrounded by thousands of dollars worth of glass. It hit the concrete hard, and shattered into thousands of pieces - few larger than a postage stamp - spraying the dog with a rainbow of pink and gold glass.

Confronted with this assault - he just stood up, looked at me, and telegraphed, "Am I supposed to DO something about this?" I said, "come here" - and he stepped over the shards and came to sit beside me, managing to shed his coating of glass and not slice his paws to ribbons. Good boy!

I looked over at the shopper who had started this - and his face was white - you could see his credit card flashing before his eyes.

And the glass blower - he stepped over the glass - put his hand on the gentleman's shoulder and said "Hey, it's only glass. It breaks. I broke one myself this morning. Don't worry about it."

Glass people are just awesome!
Posted by dragonjools at 7:52 a.m.