Effetre Veiled Rubino is a light version of Rubino, made lighter by mixing clear into the rod - you can see it if you look down the end of the rod. (Actually Rubino has a clear core too, as it is so dense, it does not show well by itself. Which is why, if you are trying to be frugal, and doing tiny little dots pulled from the center of the rod - they come out clear and won't strike, because you are pulling out clear glass. Anyhoo ... )

Comparing the colours of Double Helix's Lotis (a light version of Rhea) and Effetre's Veiled Rubino (a light version of Rubino) ... the Lotis is on the left - over dichro, with some clear in a dots (mostly to fill in the shape). Veiled Rubino is on the right, self-coloured spacers and a cube over dichro. The Lotis is lighter and pinker, the Rubino is more ruby and smidge more raspberry. 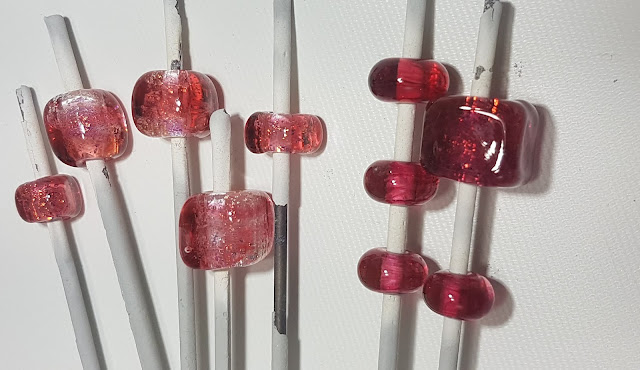 Both are pretty. Just different.
Posted by dragonjools at 1:34 p.m.