I hate pulling beads. Hate it. 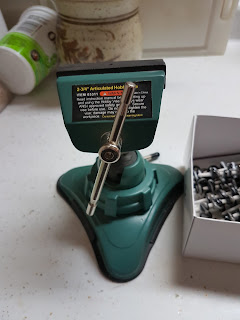 But this little puppy makes it easier. This is a portable vise - it suctions to a smooth surface - like the kitchen counter - a wipe of water on the suction surface helps enormously, and you can put your mandrel in the jaws and clamp it, and pull the beads without the fear of stabbing someone with the mandrel, the need for a set of vice grips to hold the mandrel - and the aching hands. And shoulders.

Here's a little video. There is a hole in the jaws that a mandrel fits in, but the 3/16s mandrels are a little small - so clamping those in the jaws directly works better - but the video will give you the idea.

Honestly - I have no idea how people are making all these one-handed shot-with-their-phone how-to videos. I find the interface for using the camera on the phone to be hard enough to use with two hands - one is freakin' impossible. As soon as I grab the phone - I inadvertently touch some part of the screen that triggers some action that is not what I want. Argh.

Anyway - you'll get the point.