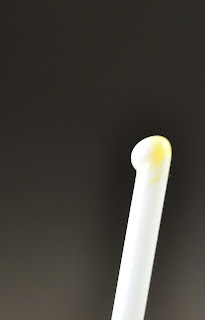 The Double Helix site suggests that it will strike and reduce, but apparently - I could not do it delicately enough, and I had no luck striking it. Reduced it instead. 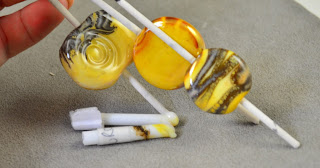 Self coloured, flattened. Attempted to strike - well - maybe got a little strike, there is kind of a blush on the end, and reduced to a deep, rich honey colour. 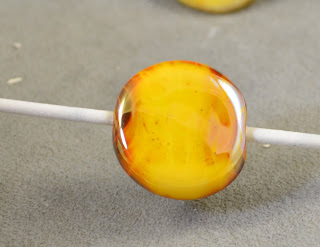 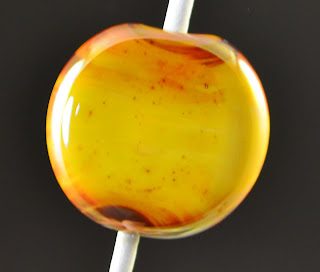 Next one, added a trail of ivory, and reduced. Par-tay! 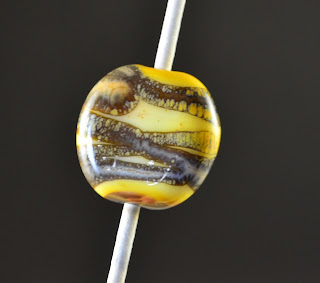 Is that not cool the way the ivory has reacted? 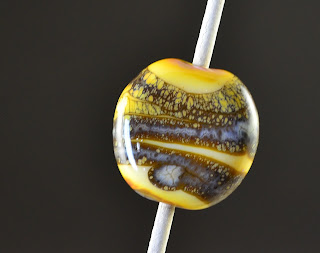 Again with the ivory and reduced and encased in this one, and the spiral pressed in. 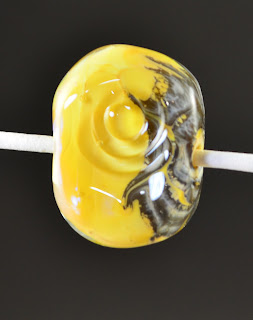 Must do more with this one. I think this will be a sleeper - people will be unexcited by the white colour, not realizing what fun they will have with it. 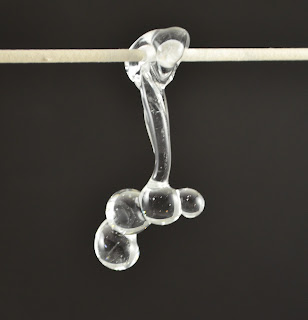 Apropos of nothing at all - I just thought this was cool.

And why I'm currently dissatisfied with making beads for jewelry - because as a pendant, this would snap the first time you banged it on something.

But how cool is that? Like honey dripping into a bee shape. Except for the colour, of course.

Krono - reduces - appears to be a transparent cobalt.  Here it is on black, reduced, and encased. 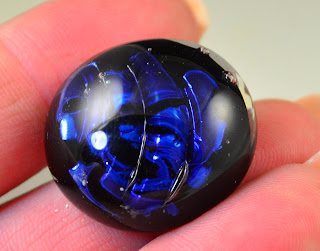 This leaf is not encased. 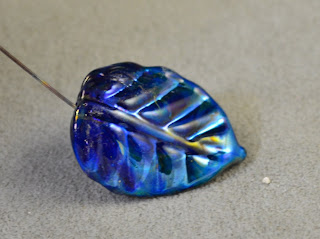 Triton - looks black, when held to the light, you can see it is cobalt blue. Reduced and encased. Pearlescent effect when encased. 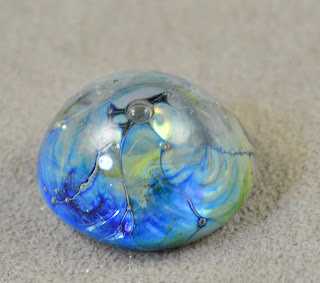 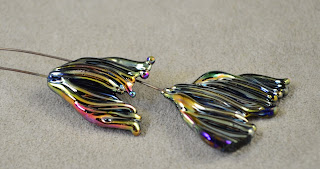 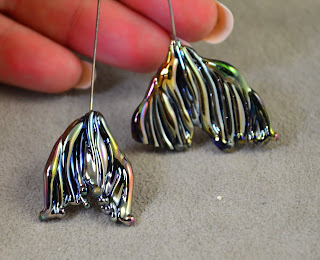 And Clio - the carnival of glass - reduced and struck. 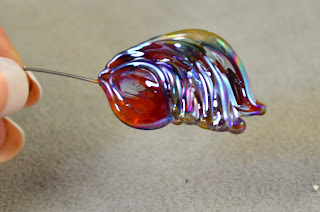 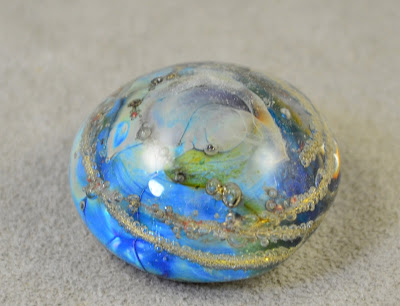 So I heard about this thing where if you put brass wire in the bead and encase it  - you get bubbles.

So, I figured I'd try that. I had to dig around to find uncoated brass wire - because a lot of the craft and jewelry wire has nylon coating to prevent tarnishing. That may create bubbles, but would also probably create soot and noxious smells, so let's just avoid that, shall we?

This cabochon is Aurae, with a spiral of brass, and encased. How this manages to be Aurae is beyond me, but that's what my notes say.

And bubble it does. Can't say that I love it, but it does do it. 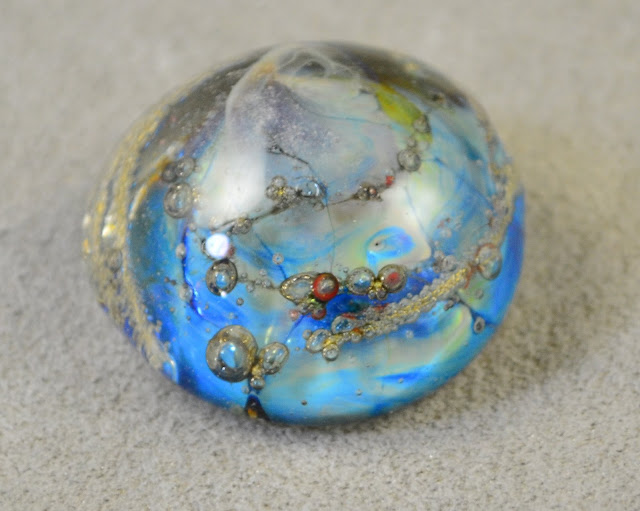 This cabochon has a layer of silver, and then a twisted, spiraled and flattened piece of brass wire, that created a pocket of bubbles at the side.

Weirdly, it appears to have a finger print in the glass, but I assure you, I did not touch the glass with my fingers. Perhaps I got a fingerprint on the silver foil and it got retained under the glass when the silver was melted off? What an episode of CSI that would make, eh? 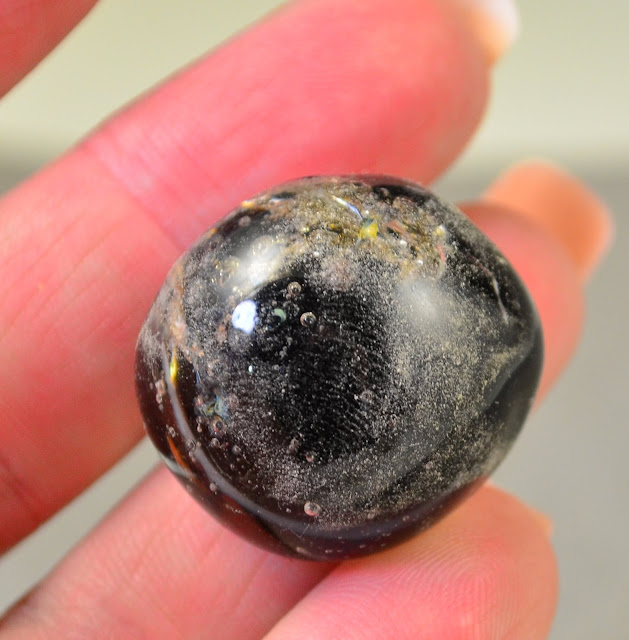 Here's the big side bubbles. Not so attractive. 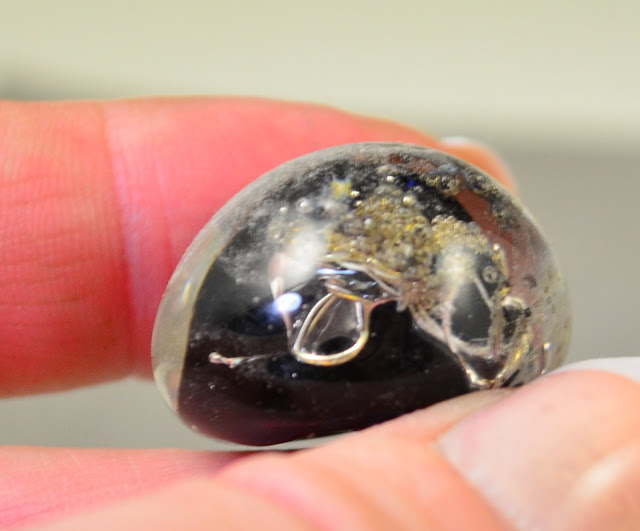 I've seen some really awesome beads done with this technique, with the brass wire inclusions, and they are either better at it, or cleverer photographers than I am - both of which are possible.

I should maybe go back and try that Aurae again. I'm really not sure that I believe my own notes. ;-)
Posted by dragonjools at 10:43 p.m. No comments: 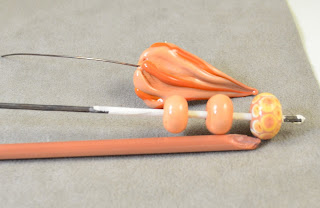 It's a brown streak, or a streak of brown colours. Here we have CiM 720 - Autumn. I found Autumn to be a bit shocky - and other testers agree.

(The leaf shape on the wire does have streaks of some other colour on top - but I apparently did not record what they were. ) 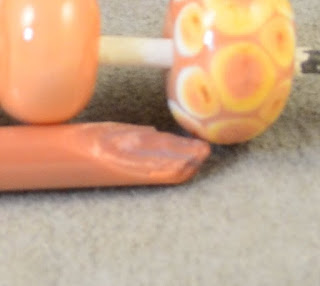 Like CiM Moccasin, it comes out a little lighter than the rod, and you can see from this  close-up that the end of the rod is ragged and striated where it has shocked off.

It's a pretty, peachy brown, from the left - two self-coloured spacers, and on the right, Ivory dots and Autumn dots on top, and it has bled like crazy. So not so desirable for super precision work, but yummy for organic blendy styles. A twisty of ivory and autumn would be fun. 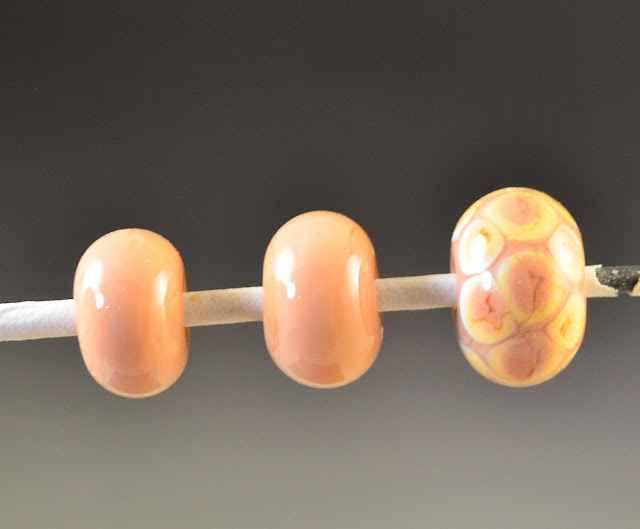 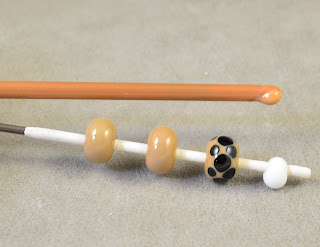 Seems to me that I got lighter, gingerier results than the other testers of CiM Moccasin did. It came out palers than the rod, and is just a nice, well-behaved light tan colour. Suitable for organics and animals. Not terribly exciting in the quest for the perfect purple, red, pink, blue, or whatever your particular passion is.


But we need those solid, hard-working every day colours in order to make the other colours pop!

This is two self-coloured spacers, and one with black dots (and a white marker bead.) 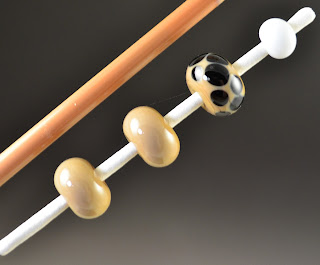 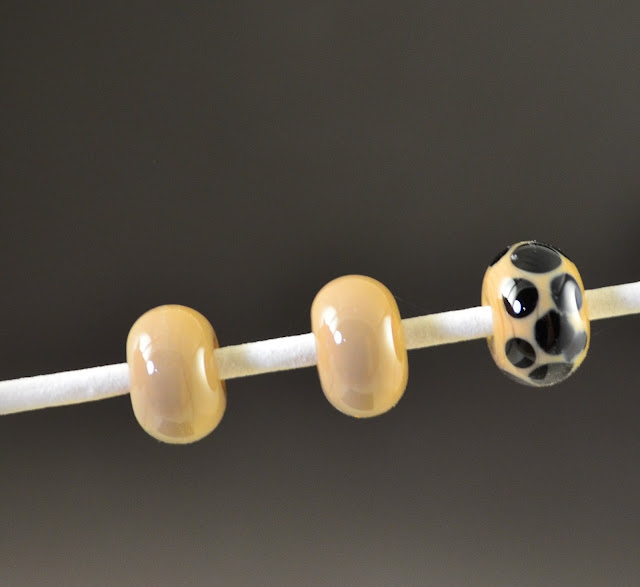 Posted by dragonjools at 9:58 p.m. No comments: 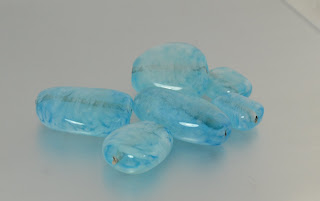 I got my hands on some of the new Shine-on Glow in the Dark glass - 104 CoE from Brent Graber. I have tried glow in the dark powder in the past, and it has been something of a challenge to use, as the glass didn't stick to it, and you had to roll the bead in the powder and then encase like mad all over it to make sure that it stayed there - much like working with mica powder. Unsatisfying as a way to work, although the glow results were good. Still - kind of a one-trick pony - especially as I'm not really about making beads that need to glow in the dark.

But everything old is new again, and apparently glowing-in-the-dark is a hot trend again. Toho, a Japanese seedbead manufacturer has just launched a line of glowing beads in different colours, and different glows, with big splashy ads promoting, of all things, beaded, glowing wedding gowns. Because when the lights go down, the party starts. Or something like that.

Well - it really does glow.  These are the handful of beads, 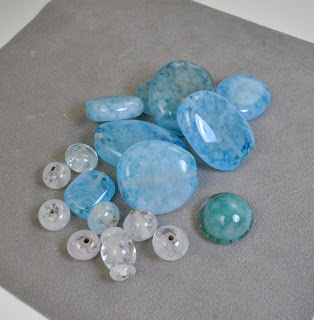 And these are the beads in the dark. For the technically inclined,  this is a 10 second exposure at ISO 800, f 7.1. In pretty much complete darkness. 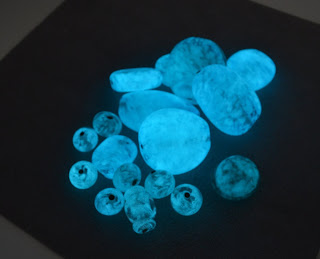 Now for the bad news. The glass is as shocky as hell. You pretty much have to pre-warm it in or on the kiln. And once you work down through the warmed part - it goes back to shocking like crazy.

But - it does come as a frit, and while the frit does actually shock - you roll the bead in the frit and listen to it snap, crackle and pop - it doesn't really matter so much.

I didn't have any problems with it with regard to heat and burning out, you can encase it or not. I'm told that some colours are not so good for encasing because they will block the specific wavelengths that "charge" the glass, and if you encase it with something too dark - same story - the glass won't charge and glow.

It is a significant improvement over the old glow powders - and because you don't really work it the same as you would other colours - you wouldn't want to get a gather and build a base bead with it, I think that the shockiness is something you can live with. It certainly is manageable with pre-heating - unlike some air-laden glass that it doesn't matter what you do - it still shocks.

It comes in a variety of pale colours, and apparently they don't all glow the same, although I was mixing the frits for these beads, so I can't say which was which. The rods themselves have a grainy texture, so you won't get them mixed up with the other stuff. These beads are mostly a core of clear and med aqua, rolled in frit and encased.

It's easy enough to work, has a really strong glow, and I would say, if you are looking for make glow in the dark beads, this is an excellent solution.

And if you want to stand out at a rave or at a nightclub, or just at cosmic bowling - anywhere that has the "black" or UV lighting - these will freaking knock your socks off. Because they are bright. Like wearing the full moon. Blue moon.

(I currently only see the 90CoE on the site - but it must be somewhere. If all else fails, call Jean at Nortel and she will track it down for you.)

Posted by dragonjools at 9:17 p.m. No comments: