I've been off with a surgery, so the blog has been quiet for a bit. So I'm back, with a long one.

After reading Lori Greenberg's excellent blog about "tumbler cleaning" - using a tumbler to clean beads - I thought I should try it. After all, I too, hate cleaning beads. Not that I can say I actually know anyone who enjoys cleaning beads!

In a nutshell, the idea to thread the beads on twisted wire, and tumble them with steel shot, which bounces the wire around and abrades the bead release out of the beads.

I encourage you to read her original posts, which are comprehensive and well written (see link above). I'll wait.

dum dum de dum. Oh, you're back? Good. Now that you have the general idea, let me share my experience with you of attempting to duplicate her results.


First of all - assemble the ingredients. I already have the tumbler - I picked one up at a garage sale years ago. I have used it very little since then. I needed to find tumbler shot, which was easy, and craft pipe cleaners, which was harder. I eventually found those at Walmart - also called Chenille if you have to ask the staff for them. They were dirt cheap for a lifetime supply. The stainless steel shot was not - but as it is new - I do not encounter the contamination problems that Lori mentions. 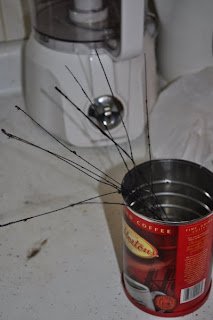 Step 1: Prepping the wire cleaners. Lori says to burn off the fuzzy stuff. I would like to add to this - go outdoors to do this.

Passing these through a flame, either a lighter flame or your torch flame, melts the fuzz into blobby lumps with the first pass, and burns it away with a second pass. I actually did use my torch, and much to my surprise, did not melt through the wires at all. Not sure what that wire is, but it is surprisingly tough.

Unfortunately, the smoke produced is oily and sooty, and rather noxious smelling, and large quantities of flaky ... ash? ... drift off and come down on everything - making a mess of the studio. I strongly suggest doing this outside, although the torch is definitely faster. The burned off pipecleaners are visible in the coffee can, ready to go. 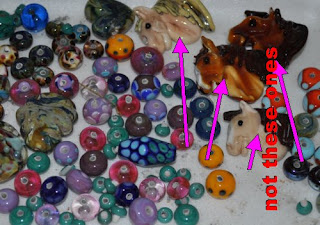 Next - I need some uncleaned beads. Oh, yeah, got lots of those. Hmmm - lets not use any that I'll be too upset about if this goes horribly wrong. We'll stick to round beads, spacers, nothing fancy with wings or legs or ears or etc. 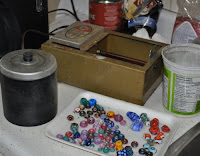 Ok - so we string the beads on the wire. A loop or a twist on the end. Hmm - this is tedious. After 3 or 4 sets, I'm not putting fancy loops on the end. How many on a strand, do you suppose? I make longer and longer sets.

Ew - this is more tedious than cleaning beads. Black soot from the burned-off pipe cleaners is getting all over my hands. I wind up doing a little springy coil thing around a mandrel to stop the beads sliding off the wire. 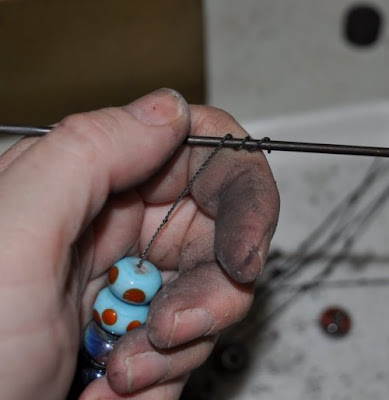 Finally - they are done. I put the shot in the tumbler barrel, and add the beads. 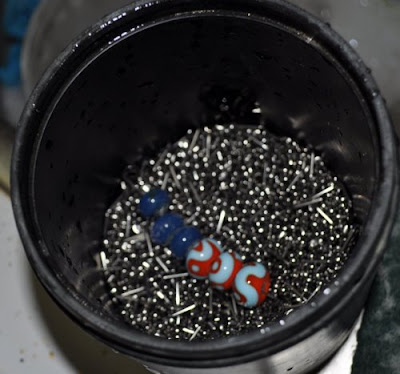 The barrel is about 1/2 full. I add water to cover, and the smallest drop of dish detergent I can manage. 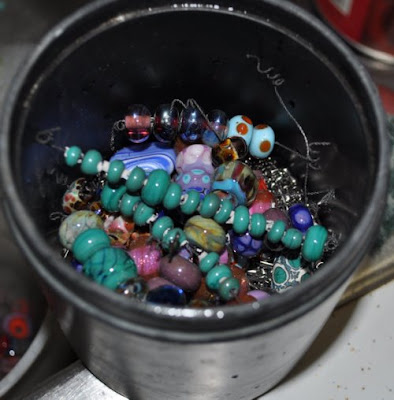 Add the lid, and set up the tumbler in my handsome, state of the art kitchen. BTW - this counter represents 50% of my food preparation surface in my kitchen. Just thought I'd share that with you. 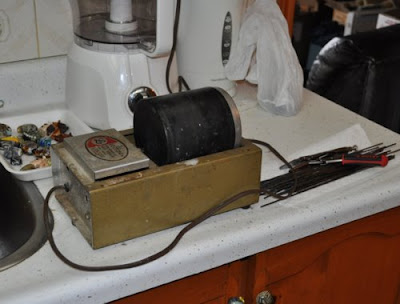 The time is 10:40 am. I'll come back and check in an hour or so. Hey - when is the last time you saw a microwave this old? My DH had this when we met, and by crikey, it still works. DH tells me we've been married for 14 years, but when you do the math, you realize that if I'm only 27, that seems, well, illegal. :-P 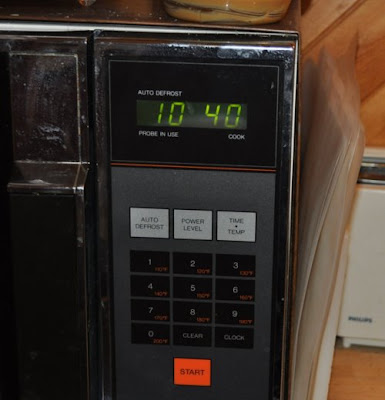 This is looking fairly promising. 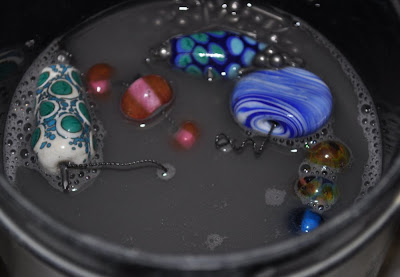 Hey - these aren't looking too bad! 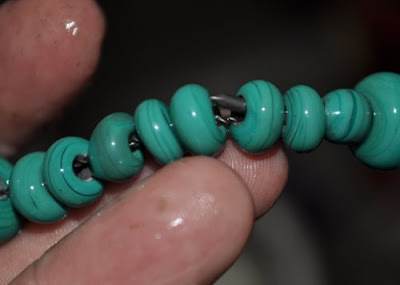 Ah yes, the old "shot manages to jam inself into a bead" thing. Of course. 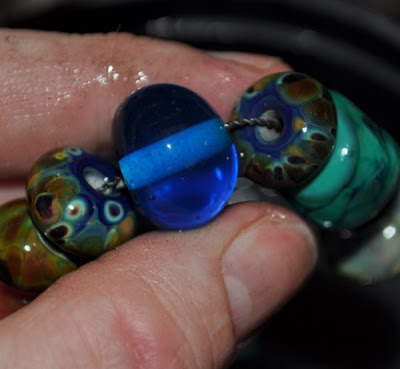 These aren't looking too bad. 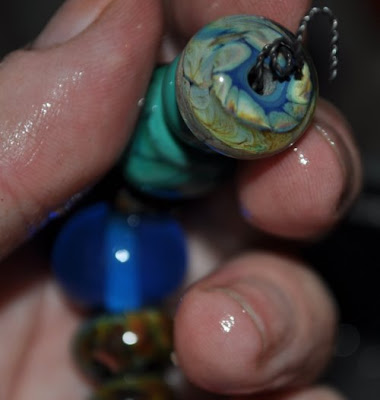 And you know, in retrospect, I should have stopped here. Buuuuuut, they are not as clean as I like, and soooooooo . . . . 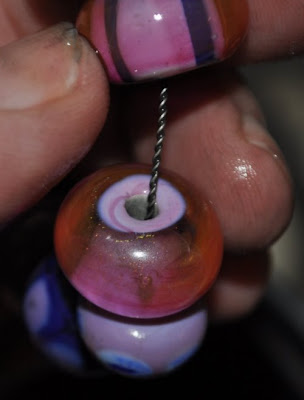 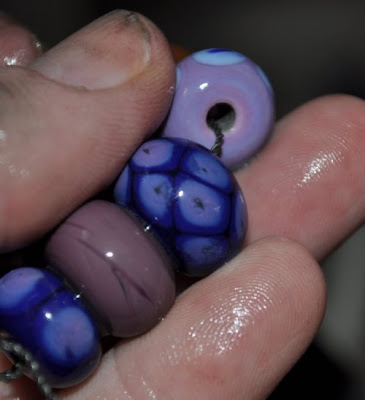 I rinsed out the shot, loaded the beads back in, put in fresh water, and thought I'd let them run another hour. The time is now 11:45. 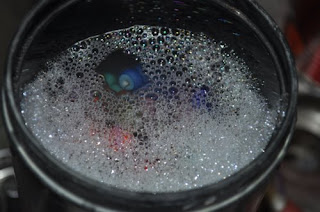 Immediately - the beads appear to have lost something, although they are cleaned, they have lost some of their sparkle. Could they have picked up some sort of contamination from the shot, even though it is new? 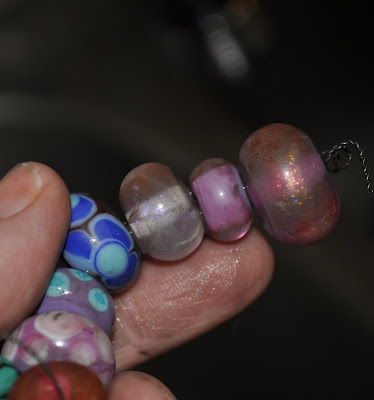 Noooo - hoping against hope, I try washing, a wash in vinegar, and even a soak in CLR. Nothing helps. 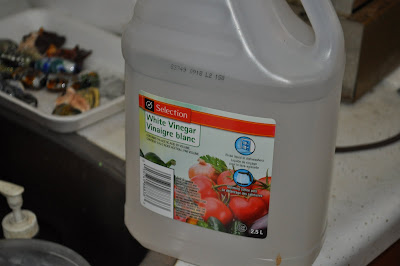 Usually, CLR is excellent for stuff like this. BTW - this IS your one solution to that dull, leaden coating on opaque effetre and vetro turquoise, soak in this and it comes off. Anyone who tries to tell me about the virtues of soaking beads in a certain softdrink is subject to a diatribe on everything from viral marketplace manipulation to empty calories to corporate monopolies and more, until they suddenly remember an appointment somewhere else. You've been warned.

Anyhoo, the damage appears to be physical. The beads are actually tumbled to the point of being slightly etched/scratched/dulled. It is not actually unattractive, and I don't believe that, with the shorted tumbling period, this happened at all. Sort of beach-glass-y. 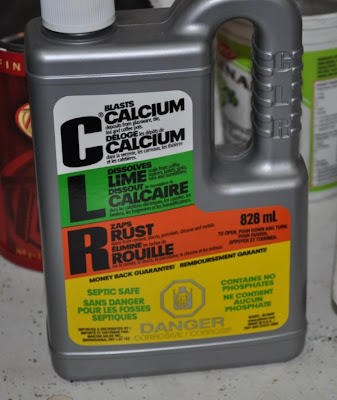 BTW - getting the beads out of the shot, the shot out of the water, and not pouring the water all over everything - sieve, plastic food container. Dump in contents of tumbler. Pick out beads. Easy. 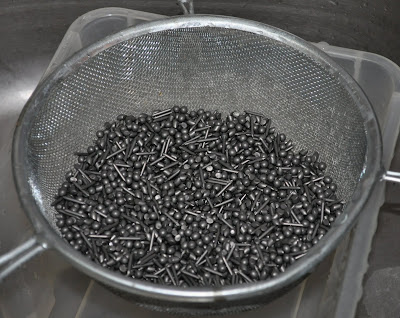 I'm not enthralled with this method - although, it absolutely works.

So, while I dislike cleaning beads, apparently - I don't dislike it this much. I'm probably being unfair - but I'd rather do them with a dremel and a bead-dreamer bit.

And a huge thanks to Lori Greenberg for the original idea, and sharing and blogging it in detail.

Here is the end result. Saleable, yes. Some lost to breakage, about 3 cracked in the tumbling, all tranparent pink lauscha with dichro. BTW - the tiny, odd-shaped petroleum green ones are markers that I use at the studio, they are not beads per se - I just threw them in as part of the experiment as I had no emotional stake in them, so to speak. 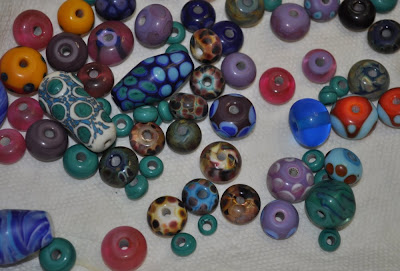