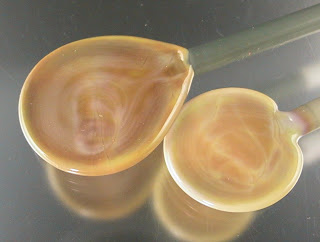 Named for the Canyon de Chelly National Monument (presumably) - you would expect this glass to be streaky and rock-like - and indeed, it is.

The latest batch to arrive is significantly grayer in the rod than the last batch (see pic - new batch is the top paddle). Generally, when there is a big difference in the CIM glass - they designate it as a "unique" - same as the Moretti and Vetro Odd-Lots, and add a -x to the product code. But, this one came with no such notation. The factory applied code is the same. 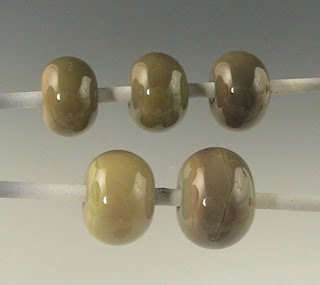 I would say that the new version gives more intense colours, and develops colour more quickly and easily. The bottom mandrel (old version), the bead on the left was not struck - in went into the kiln virtually white, and the colour that shows developed in the kiln. The bead on the right was struck.

The top mandrel - the bead on the left was not deliberately struck, but it developed colour just by proximity to the flame from striking the next two beads. 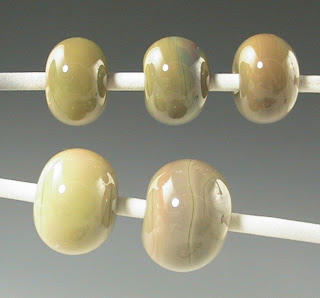 This picture is a little underexposed, but shows better the variability and a lot of the subtle colours in the glass. Interestingly, they look almost pink when they go in the kiln, but the end result is more a cafe au lait.

I personally think the new version is more interesting - but if you have a production bead that counts on the colour staying light - you might want to hunt down the old version and stash it.
Posted by dragonjools at 10:39 p.m.